The Chapel of Notre Dame du Haut, Ronchamp, the small hilltop chapel located in the foothills of the Vosges in France, created by Le Corbusier in 1955 has been discovered vandalised. On Friday, a nun reported that a stained-glass window, one of many executed and signed by Le Corbusier, was broken and a concrete trunk was missing. Police have confirmed that the damage was caused as a result of a break in at the chapel.

Intruders had attempted to gain entry via a door. The ruined stained glass has been described as “priceless” as it had borne an original illustration by Le Corbusier. An assessment from the department of historical monuments found the window to be irreparable.

Antoine Picon, President of The Fondation Le Corbusier, which protects the architectural and artistic works of Le Corbusier, issued a statement urging that emergency measures be taken to secure the protected site. The statement called on the Association Oeuvre Notre-Dame-du-Haut to “better protect the heritage of the twentieth century and that of Le Corbusier in particular.” Picon also took the opportunity to point to the church’s poor structural and cosmetic state, citing “moisture problems, infiltration and poor preservation of masonry.”

His views are echoed in a piece written by Le Corbusier scholar and Phaidon author William J.R. Curtis on the Architectural Review's website. In a piece titled “How one vandalism can hide two others”, he says the chapel “is quite literally falling apart, with the white pebbledash cracked and crumbling away and the bare concrete eroding at the edges,” a state he describes as “scandalous” given the income from the 80,000 tickets sold each year. 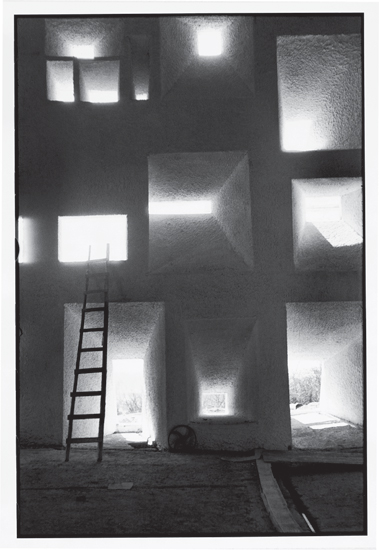 Curtis also attacks a controversial series of works on the site by Renzo Piano, including a monastery built into the side of the hill nearby, completed in 2011, and a new approach route that steers visitors towards the ticket office, out of kilter with Corbusier's original scheme of a ritualistic ascent up the hill.

The Piano project, writes Curtis, “was ‘sold’ behind a smokescreen of sanctimonious incense as enhancing the religiosity of the place. In fact it has done the opposite by treating this universal masterpiece as merchandise, de-sacralising the landscape and destroying the aura. The Chapel itself has quite literally been undercut and trivialised by a host of surrounding mediocre architectural gestures. Far from becoming more ‘spiritual’ the place has become more materialistic.”

He describes the ultimate effect as transforming this once-remote site into a “gated community” with outward signs of prosperity, suggesting it is this, not religious malice, that might be to blame for the break-in.

In his seminal book, Modern Architecture Since 1900, William J.R. Curtis writes that Ronchamp was one of "a series of elusive masterpieces Corbusier created between 1945 and his death in 1965. "There was none of the loss of nerve manifest in the late works of Gropius, nor the mannerist exaggeration which seemed to afflict Wright, nor the technological perfectionism of Mies van der Rohe. Like the ageing Michelangelo," Curtis writes, "Le Corbusier entered an increasingly private and mystical world of poetry in his last years. It was almost as if," Curtis writes, "the post-war world conspired to stop the Le Corbusier of 'standards' and industrialized prototypes from having an effect, leaving, presumably, the idiosyncratic poet of form to dig ever deeper into private worlds of metaphor."