Make a date with On Kawara

Japanese conceptual artist On Kawara is surely one of the most singular artists working today. Months after arriving in New York in 1965 from his native Japan he began a series of ‘date’ paintings collectively known as the Today Series. He’s been making them ever since. Wherever he is in the world he makes one painting a day, and if he is unable to complete it that day he destroys it. Following the same basic procedure and format, each of these works is carefully executed by hand with the date documented in the language and grammatical conventions of the country in which it is made (Esperanto is used when the first language of a given country does not use the Roman alphabet). The project is designed to end the day he does. Kawara does not give interviews or talk about his work. 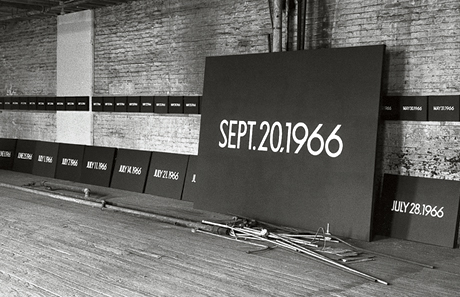 Kawara invents rules or self-imposed limits for his work. There are four or five coats of the same brand of paint on each canvas. The lettering is hand-painted. It is always white and occupies pretty much the same place on each canvas, though the canvases are not always the same size or colour.

For a while he made a map of his daily walks and cab rides. He also made lists of the people he met. He sent telegrams to friends and colleagues around the world, telling them he was still alive, "I am still alive - On Kawara", and for some years he also sent out postcards from wherever he was, each rubber-stamped with a message detailing his temporary address and the time he got up. When the rubber stamp was apparently stolen the postcard project stopped. 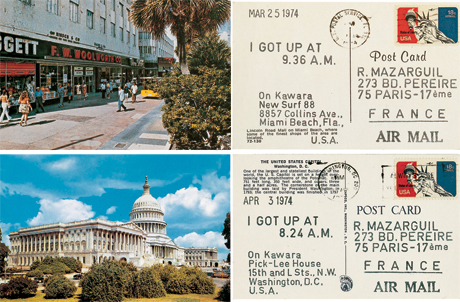 It wasn’t always thus. On Kawara was a teenager in Tokyo when Nagasaki and Hiroshima were bombed. His early works featured images of prisons and detailed drawings of amputees in bathrooms - legless, pregnant women, bits of bodies and slugs. He destroyed most of them.

On one level his work is related to key components of conceptual art, such as documentation, language, process and sequentiality. But on another level it's like a Zen koan - a puzzle without a solution. The date paintings are clinically objective until you happen upon one that depicts the date of your wedding or the birth of your child, at which point it suddenly turns personal and evocative.

If you want to know more he’s the subject of a fascinating Phaidon monograph. But if you want to see the work up close there’s a new show, On Kawara Date Painting(s) in New York and 136 Other Cities, opening at the David Zwirner Gallery’s 525 and 533 West 19th St spaces in New York this Friday.

The exhibition will feature over 150 works selected by the artist, comprising a presentation of the date paintings from 1966 to today. A comprehensive selection of works painted in New York will be displayed in one gallery, while the second exhibition space will be devoted to the presentation of works painted in almost all the other cities ever visited by the artist.

New York occupies a central importance within the Today Series as the city where the first date painting was made (January 4, 1966) and where the majority of the works have been executed. It also marks the location of three significant paintings produced on the days surrounding the first manned moon landing in July 1969 (July 16, 1969; J_uly 20, 1969_; and _July 21, 1969_); each presents the largest canvas size Kawarau has used for the date paintings (61 x 89 inches). Each of his paintings, when not on display, is encased in a handmade cardboard box. On certain days, a newspaper clipping from the city in which the painting is executed is selected and used to line the interior of the box. The actual newspaper clippings accompanying the ‘moon’ works are exhibited alongside the paintings and offer a narrative component, with the headline of one reading “Man walks on moon.” 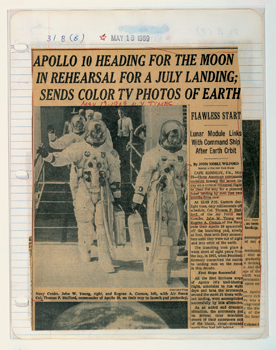 Japanese writer Lei Yamane notes in the catalogue accompanying the exhibition that each date painting “is like a letter whose delivery has been delayed. For each day in which a date painting is not produced, “Kawara is shut in the closed room of time, simultaneously alive and dead. The flickering between life and death, existence and non-existence, is transferred intact to the entire Today Series. This is because the series will be complete when Kawara’s body ceases to exist - when superposition finally collapses completely and Kawara has entered the irreversible phase of ‘death.’ Or conversely, because until that moment the series itself is a superposition of existence and non-existence.” The show runs from January 6 to February 11.