The World We Made on CBS This Morning

The nuances of climate change aren’t easy to get across. That’s partly why we’ve created The World We Made, a speculative account of how the world could work in 2050, written from the point of view of a British history teacher, Alex McKay.

Author, Jonathon Porritt was invited on to CBS’s This Morning show earlier today, to talk through the book, its format, and the kind of world it describes, and he put his case remarkably succinctly, we think.

“I think people are baffled as to whether it is possible to create a really, good sustainable world,” Porritt told This Morning’s anchors, Charlie Rose, Gayle King and Norah O'Donnell. “So, by telling this story, from the perspective of 2050, it shows readers what that world could be like.” He added, “It will be a good world, lots of opportunity, lots of prosperity.”

Responding to King’s question about the peculiar, quasi-fictional format of the book, Porritt said he had decided to tell the story from the point of view of a future everyman, because “this has to be personal. If you just write about these things, put these facts on the table, people tend to think, ‘has that got anything to do with me?’" 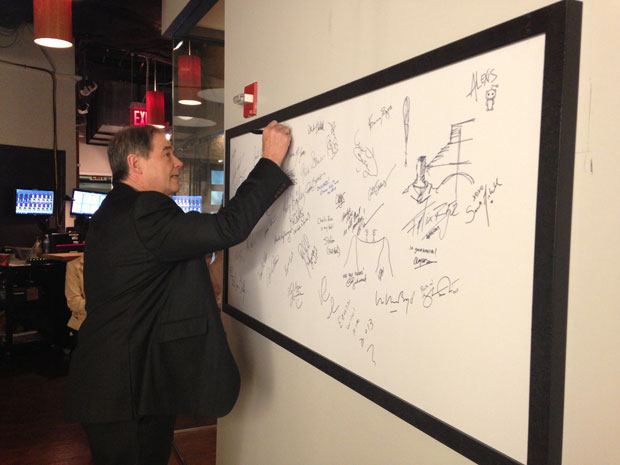 He picked apart some of the thornier topics too, such as America’s putative energy independence. Many commentators say this is only possible with shale gas extraction, yet Porritt argues that “renewable energy is just as much a part of energy security as gasses,” adding that, while renewables only make up a small proportion of the current supply, its rising all the time. He also discussed China’s role in a sustainable world with Norah O’Donnell, something that Porritt sees as being “critical” if we are to all avoid environmental disaster.

It’s only about three-and-a- half minutes long, but Jonathon packs a lot in. Click on the image of him signing the CBS whiteboard above to watch the segment. And if you like what you see, please pick up a copy of our highly sustainable, carbon-neutral book, The World We Made, here.