Land art gets international in LA

It’s interesting to note that when it first emerged in the 1960s, Land Art was seen as an artistic protest against the perceived artificial aesthetic and the commercialisation of art. Artists such as Alan Sonfist, who planted an indigenous forest in New York City, and Robert Smithson, whose ‘non sites’ comprised earth and rocks collected from a specific area installed in a gallery as sculptures, made the deliberate move to create work beyond the reach of the traditional, transportable work the art market had characteristically traded in. It’s timely then, that as soaring art prices prompt a backlash that can be seen in the rise of ephemeral performance-type art, that Land Art should also be on the agenda once again.

To The Ends of The Earth – Land Art to 1974, is the first exhibition of its kind and takes a look at the socio-political contexts that gave way to the emergence of earth as an artistic medium, and the location of works in remote sites far from familiar art contexts. It’s curated by MOCA Senior Curator Philipp Kaiser and co-curator Miwon Kwon, Professor of Art History at UCLA and features over 80 artists and projects from the UK, Japan, Israel, Iceland, Eastern Europe, as well as North and South Americas. The exhibition is organised by The Museum of Contemporary Art, Los Angeles (MOCA) in collaboration with Haus der Kunst, Munich and runs at MOCA until September 3rd 2012.

By the nature of the genre, most of the original works are site-specific and can't be moved - assuming they still exist. So Kaiser and Kwon are using recreations in some instances and photographs in others, as well as films documenting the original works.

Kaiser's inspiration for the show was Michael Heizer's Double Negative, an enclave of earth 30 feet wide, 50 feet deep and 1,500 feet long. It's part of the MOCA collection, but located in Overton, Nevada. The duo hope to make the point that land art isn't all monumental sculpture or limited to the US. "Land art happened in various places on the planet. It was not only an American phenomenon," Kaiser says. An example from Japan is Group I and its 1966 piece E. Jari, comprising 12 tons of gravel. A re-creation has been built near the museum's entrance. 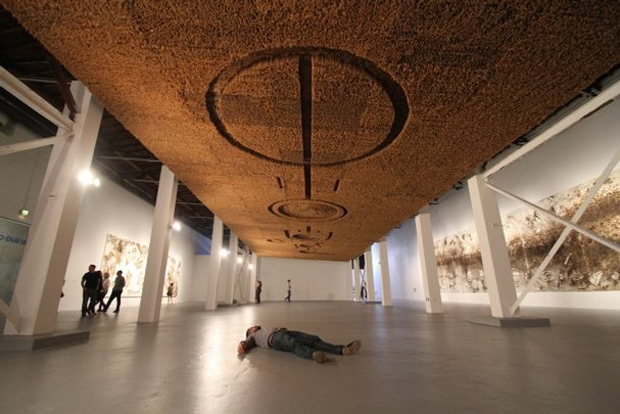 One documentary spotlights a Patricia Johanson creation titled Stephen Long, named after a railway engineer. The 1,600-feet long, 2-feet wide sculpture was made of plywood and placed on an old train track in New York and the shades of the colours changed as the sun rose and set. The largest piece is an installation titled Crop Circle. It's not strictly part of Ends of the Earth but rather Cai Guo-Qiang's solo exhibition, Sky Ladder. Commissioned by MOCA, the piece runs along the entire ceiling of a long gallery. It recreates the types of mysterious crop circles that some people believe are left in farmers' fields by aliens. By suspending the work from above, visitors are forced to look up to view it.

If you can’t get to the show you’ll find much of the work exhibited in Phaidon’s recently republished Land and Environmental Art,  a comprehensive survey of artists working with the natural environment from the 1960s up to the present day. It includes a wide variety of earthworks, environments, performances and actions illustrated with photographs, sketches and project notes.