How to photograph North Korea

We know little about life in North Korea - or the Democratic People's Republic of Korea (DPRK), as this military dictatorship prefers to style itself -  beyond the escalating threats of its young leader Kim Jong-un. Many photographers - including our very own René Burri - have been fascinated by the country. Belgian photographer Maxime Delvaux was so keen to see the place, he booked a 12-day trip the country, to document both its architecture and its overt propaganda. 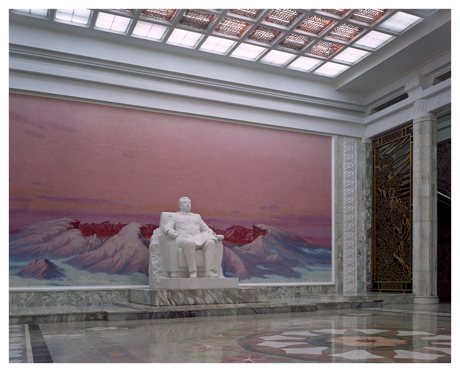 Grand People Study House entrance hall. This is Pyongyang's central library that was built to celebrate leader Kim Il-Sung's 70th birthday. It has a total floor space of 100 000m2 and 600 rooms. Photograph by Maxime Delvaux

The journey was not without difficulties. North Korea's restrictions on journalists and photographers meant that Delvaux had to appear to be a tourist, and he was accompanied by a permanent guide and driver at all times.

"Particular visiting requests can never be made; the whole trip is programmed according to the site they have planned for you to see," Delvaux tells Phaidon. "Taking pictures is OK when you are allowed to. Several times I've tried asking for them to stop at random places to take pictures, but there was always a good reason not to."

"As I was taking pictures with a large format camera they were a bit more suspicious and were always checking the pictures trough my camera before I was allowed to take them. Sometimes they even proposed other viewpoints that were 'better'. These constraints were great, as it was exactly how I wanted to approach the subject." 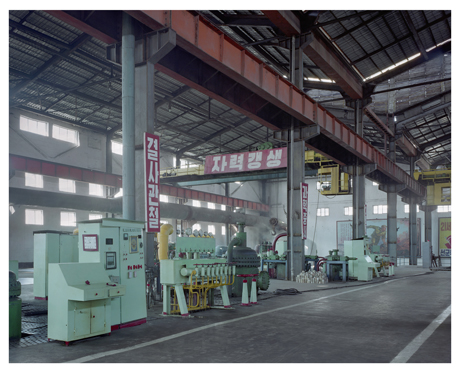 The Hungnam Fertilizer Complex in Hamhung, in maintenance at that time, is one of the largest factories of the DPRK. Photograph by Maxime Delvaux

"I never take photographs without having a subject defined," Delvaux continues. "I like the idea of having a post-journalistic approach, with a very descriptive and neutral point of view. That's why I always work with a large format camera that forces me to think about the best way of representing the various sites that I choose to photograph."

The photographs Delvaux came back with show how the North Korean state likes to portray itself both to outsiders and its own citizens. There are long boulevards suitable for the familiar military parades and processions, large monuments to past victories and at every opportunity North Korea's leaders are seen to overlook or point the way for their people. 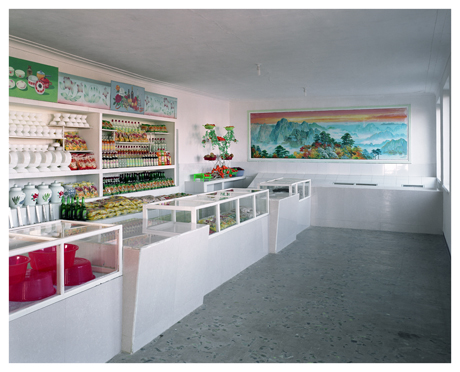 "I've always been fascinated by the power of propaganda," Delvaux says. "I really wanted to see what North Korea really was, and how they presented the country and its regime to tourists through the very strong propaganda. I decided to take these photographs to show exactly what they allow tourists to see."

Despite the state control, Delvaux says that tourists generally have a nice time when visiting North Korea. "What comes out it the end is how effective their propaganda is. It's very nice to visit DPRK and a lot of people enjoy the stay. They show you various sites that are always linked to the greatness of the country and of course to the great leader. You see spectacular monuments, eat a lot of not so bad food, have some beers and the guides are really nice and funny." 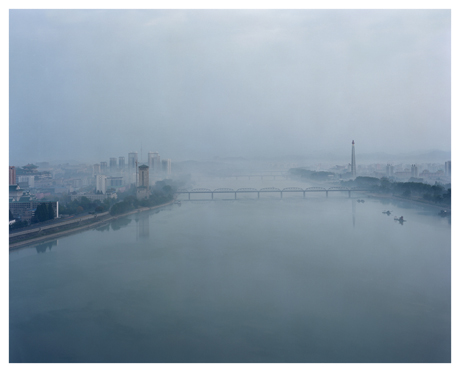 The Juche tower on the Taedong river represents the ideology developed by Kim Il Sung. It was designed by Kim Jong Il for his father's 70th birthday. Each of its 25 500 white granite blocks represents a day of his life until his that day. Photograph by Maxime Delvaux

"At the beginning, the trip was actually quite nice, but as I had the chance to spend twelve days alone (with guides of course) after leaving the main group, I really started to feel the lack of freedom and the weight of their propaganda."

Delvaux says the trip has furnished him with a greater understanding of the essence of North Korea: "Propaganda is what North Korea is all about.  The power of it keeps the country alive." 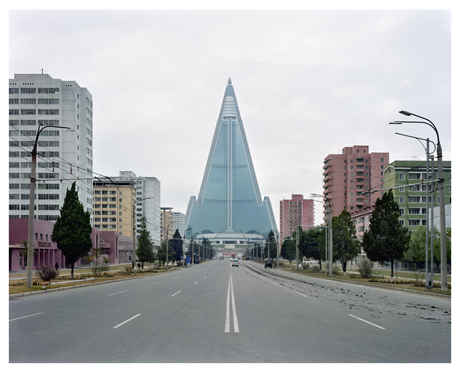 The Ryugyong Hotel with a height of 330 meters, is by far the largest structure in North Korea. The construction began in 1987 and is still ongoing. Photograph by Maxime Delvaux

To see more, go to Maxime's site, and for a further thoughtful meditation on nationalistic propaganda, take a look at Iron Fists: Branding the 20th-Century Totalitarian State which takes a really close look at how four totalitarian states have used design to sell their messages. 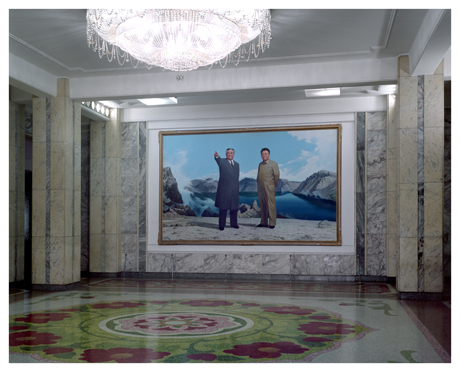