Andy Warhol painted different people for different reasons. As our book Andy Warhol Portraits makes clear, his early 1960s pictures of celebrities such as Marilyn Monroe, Marlon Brando, Elvis Presley and Natalie Wood - made when Warhol was still finding his own fame - “transcend earlier conventions of portraiture and feel closer to the presentation of Christian Icons, Olympian Gods and classical history that were the stuff of Old Master art.”

However, by the 1970s, Warhol’s portraits focussed less on earlier, unattainable Hollywood stars, and instead portrayed the socialites, industrial scions and pop stars well within the artist's social circle.

Many of these later portraits were commissioned by their subjects, or by entrepreneurial patrons, such as the American investment banker Richard Weisman, who paid for a series of sports portraits from Andy in 1977, including his now well-known picture of Muhammad Ali.

The pictures served as an important income stream for Warhol, and some disregarded the works’ artistic merit; “less a history of painting than a history of publicity” was how the New York Times’ Hilton Kramer described a 1979 Warhol portraits retrospective.

Nevertheless, when the art directors at TIME magazine sought to sum up the monumental degree of fame Michael Jackson enjoyed following the success of Thriller, they knew who to turn to.

Warhol had met Jackson on a number of occasions, at places such as Studio 54, and the artist immediately accepted TIME magazine’s March 1984 cover commission, which was to be published shortly after the single Thriller peaked (surprisingly given its subsequent success) at number 4 in the US Billboard Hot 100. 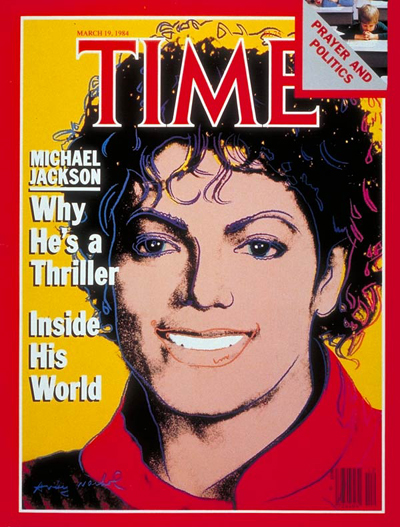 In his diaries Warhol mentions Jackson more than two dozen times, most often discussing chance meetings at Studio 54. However, on two moments in 1984, Warhol actually talks about the portrait of Jackson.

March 7, 1984 : I finished the Michael Jackson cover. I didn't like it but the office kids did. Then the Time people came down to see it, about forty of them. And they stood around saying that it should increase news stand sales. . . . Then later the Time guy called me . . . and said they were going to use it. I think the yellow one. And I told him to cross his fingers that it wouldn't get bumped on Saturday and he said he would.

March 12, 1984: Time came out and the Jackson cover made it, it didn't get bumped. And the article inside was crazy. It had them asking if he was going to get a sex-change operation and he said no. The cover should have had more blue. I gave them some in the style of the Fonda cover I did for Time once, but they wanted this style.

That sex-change question might sound less controversial today, yet Andy’s bright version of the King of Pop  - which features in the National Portrait Gallery’s forthcoming show Michael Jackson: On the Wall (28 June to 21 October) - remains just as starkly recognisable a representation of imperial period fame today, as it was thirty four years ago. To see more of Warhol's work, take a look at these books.