Cui Jie - Why I Paint

Cui Jie’s paintings are largely based on her continuous study of the architectural landscape in the three cities in which she has lived: Shanghai, where she was born and grew up, Hangzhou, where she attended the National Art Academy, and Beijing, where she currently lives and works. She observed at first hand the outstanding transformation that urbanization in Chinese cities has brought about, drastically changing the cityscape, with a proliferation of buildings, high-rises and plazas being erected throughout.

Cui’s paintings depict these urban architectural creations and presences, but from her distinct perspective. In her eyes, the sculptures that inhabit the different city squares appear superimposed on the buildings in the background. At some point, due to the effects of the depicted light, the surface of one merges with the surface of the other so that the sculpture becomes part of the architecture and the architecture part of the sculpture. Her large canvases present surreal architectural drawings, in which enlarged sculptures are grafted onto anonymous buildings found on city avenues, on street corners and in suburban areas. Here, the Vitamin P3-featured painter tells us what interests, inspires and spurs her on. 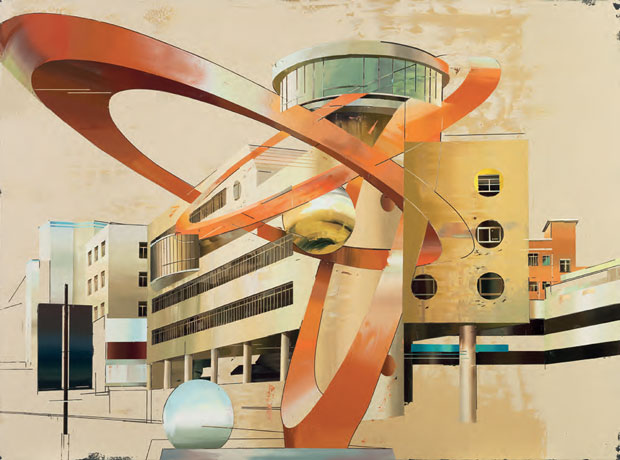 Who are you? Cui Jie. Born in Shanghai. Graduated from the Department of Oil Painting at China Academy of Art. Living and working in Beijing now.

What’s on your mind right now? I’m thinking about the matter of sound in painting - the synaesthetic relationship between vision and hearing. I try to respond to Kandinsky’s concept from another angle — not just connecting music with visual forms, but to generate sound directly. However, I don’t want to pursue it as a separate theme, but wish to explore its possibility by incorporating it with architectural elements.

How do you get this stuff out? I study the texture of the surfaces of architectures under the sunlight, especially the reflective metallic walls exposed outside. I carefully examined the pattern and quality of these surfaces, but not with my eyes, since these reflections were too strong to look at straight. Instead I experienced a strong feeling when my eyes avoided the reflections. At that moment, I sense the potentials of hearing, or other way of bodily perception. 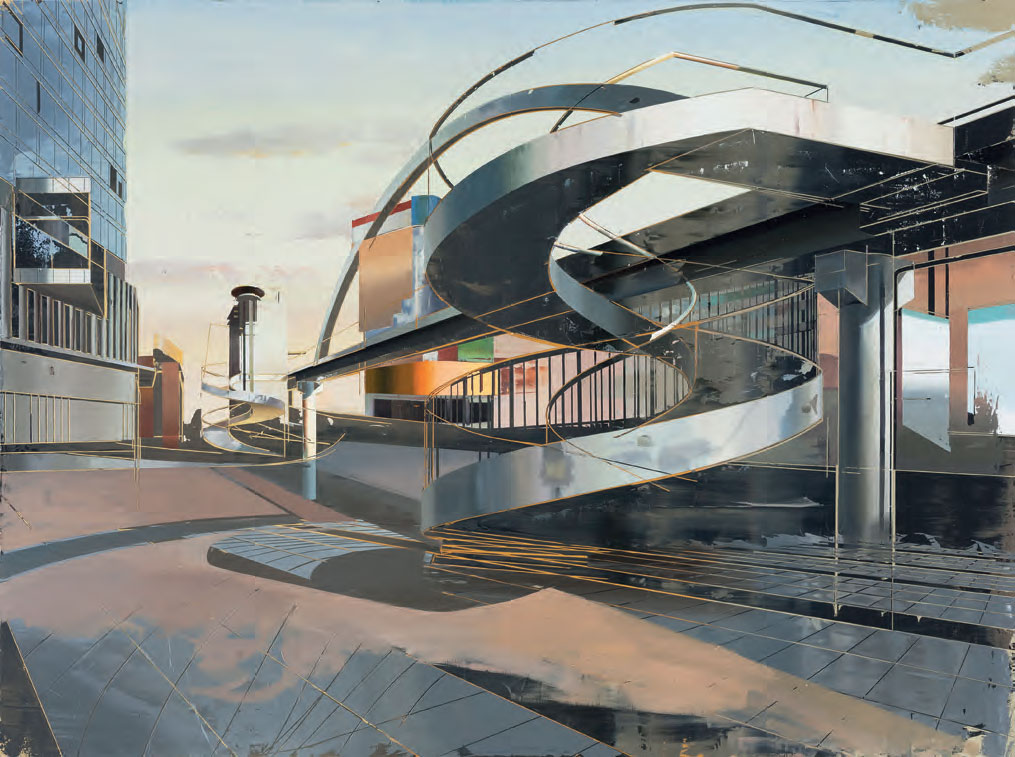 How does it fit together? I didn’t set a specific subject or research project to start with, but simply observe the surroundings as a stroller living within the environment. Sometimes I stop to look at the colours of the buildings or to intentionally listen to the noises on the streets; other times I just notice certain appearances when I pass by places. For instance, I often walk past different plazas where a statue stands at the centre. When you walk closer to it, the statue blends into the building in the distance, at which moment the surfaces of the building and the statue merge together by light, turning each part into another.

It is a moment like this that makes me start to think about the relationship between architecture and sculpture, the division of their shapes, and the histories of their productions behind. A city is a living ecosystem, and things are all interweaved with one another in their own ways. In China, one can see many different “appropriation” styles - Russian, the Bauhaus, etc. - but I’m mostly interested in the influence of Japanese Metabolism on Asian modern architecture. Many buildings employ columns and circular roofs in China, which all results from the influence of Metabolism.

What brought you to this point? I still follow a quite Modernist way of creation methodology, which infiltrates my art education and life. Architecture is experiencing history just as human beings. My paintings can be seen as my reinterpretation and re-perception of history. 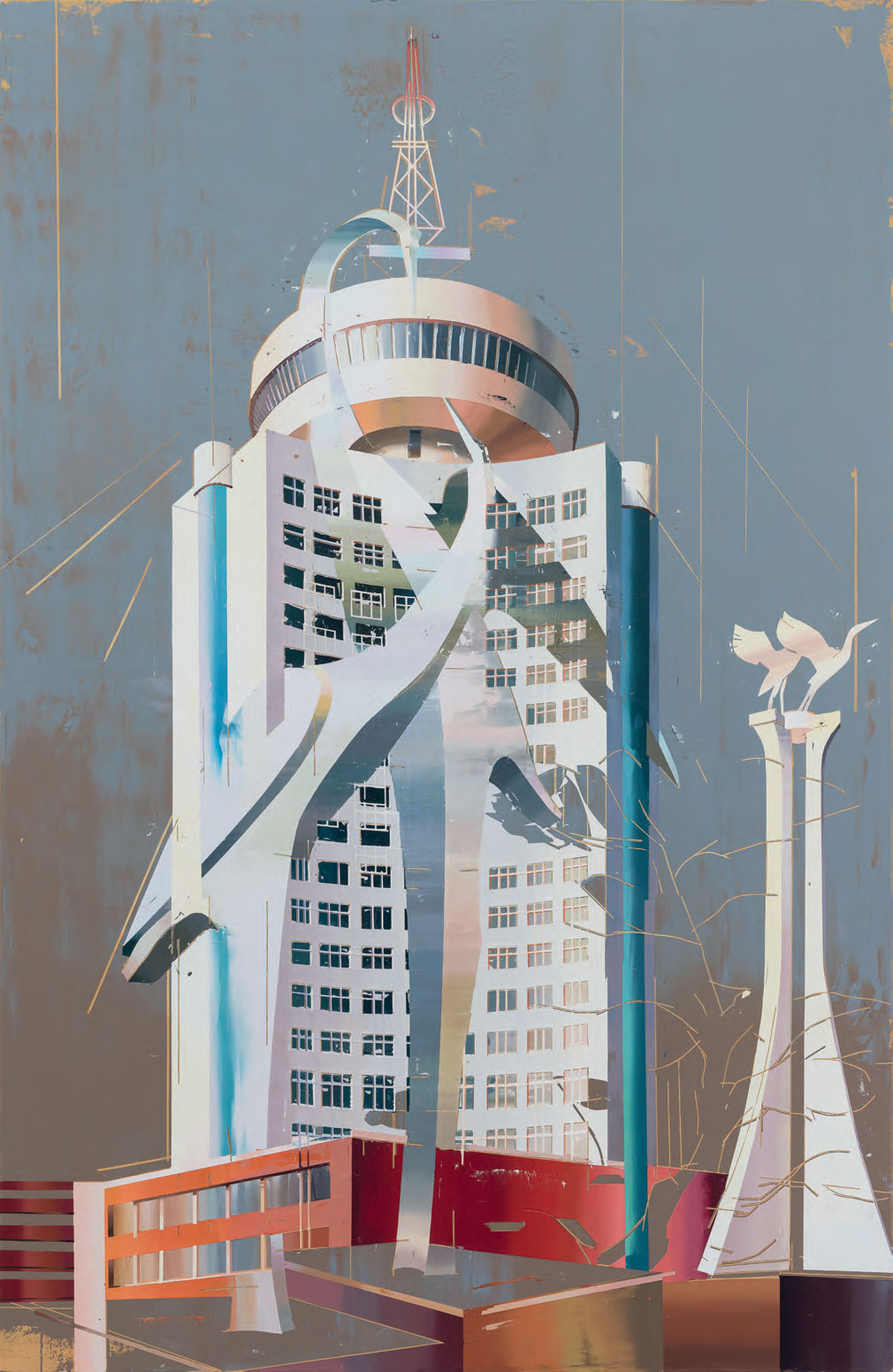 Can you control it? To me, losing control is the norm. My initial goal and vision can easily get lost during the process. There are exceptions when I have an extraordinary result at the first round of painting. I tend to keep working on the canvas to cover the image, and sometimes another surprise occurs. If at the time I still remember the pre-set goal and thought, I would compare the two; but if I’m already lost, I would continue painting until I completely forget my purpose, then I start to think: when does it all end? The painting would be put aside for a while, until someday I come back to give it a brand new start. I may add several brushes to it, or suddenly realise that it is already a good painting. But nevertheless, everything would look afresh then.

Have you ever destroyed one of your paintings? Never. But I always have such burning desire, especially for the ones that do not belong to me anymore.

What’s next for you, and what’s next for painting? Recently I’ve become interested in Le Corbusier. I don’t mean his architectural philosophy, but the ground that was broken by his and his clients’ ideas and opinions. For now it’s early stages and I don’t yet know what might come from it. 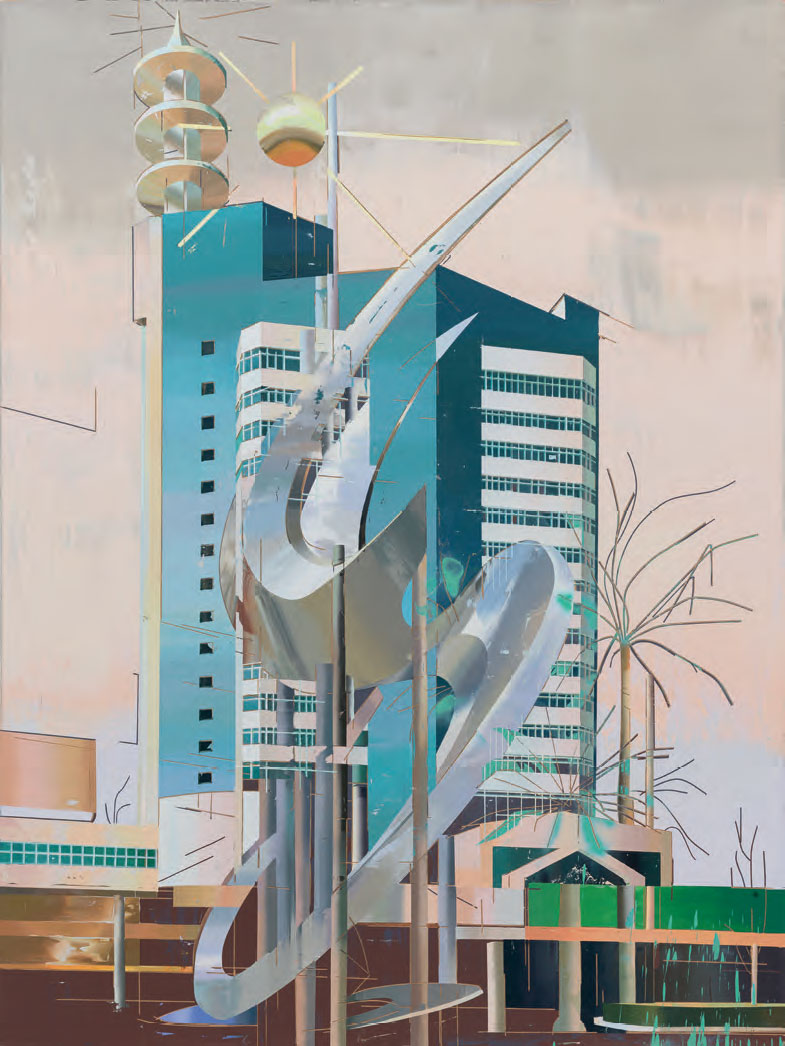 Find out more about Vitamin P3 New Perspectives In Painting here. Check back for another Why I Paint interview with a Vitamin P3-featured artist soon. Finally, be sure to look out for Cui Jie in Art Basel Miami Beach's young artists section Nova, where her gallery Leo Xu Projects will be showing a selection of her paintings.