Milan has won the right to host the 2015 world Expo thanks in part to its theme, Feeding the Planet, Energy for Life. The fair, which runs from May until October next year, seeks to engage with the problems of nutrition and the resource shortages across the planet.

It’s a suitably compelling brief, but perhaps one a little likely to draw monotonous audio-visual displays, lecturing crowds on our planet’s dwindling resources. Those flat screen displays were something British designer Thomas Heatherwick sought to avoid when he created his award-winning UK pavilion, dubbed the Seed Cathedral, for the Shanghai 2010 expo, and its also something that the artist Wolfgang Buttress has effectively dodged in his award-winning bid for Milan 2015.

This new pavilion takes on the theme by drawing attention to the world’s declining bee populations - crucial not only for honey production but also the fertilisation of many crops. It might not have the elegant simplicity of Heatherwick’s pavilion, a 20 metre-high enclosure, formed from 60,000 slender transparent rods, each encasing one or more seeds at its tip; yet it does win out when it comes to screen-free interactivity. 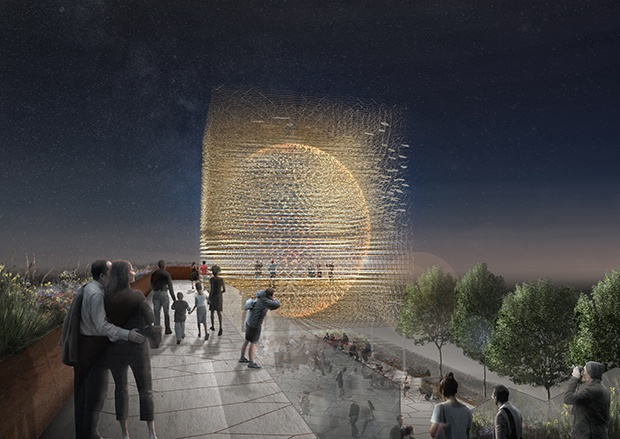 Renderings of the UK pavilion at the Milan Expo 2015, by Wolfgang Buttress

The government department, UK Trade & Investment said yesterday that Buttress’s pavilion “explores the life of the bee colony through an immersive sensory experience – a beautiful and profound encounter leaving visitors with a lasting flavour of the British landscape’. Visitors will walk through an orchard and a wildflower meadow before entering the hive, which will ‘pulsate, buzz and glow according to signals from a real hive’. Careful now.

“Visitors will walk through a fruit orchard and enter a natural wildflower meadow,” the department’s announcement goes on. “As they near the centre of the meadow, the focal point of the structure will come into view: a golden orb made of fine steel lattice based on the design of a honeycomb. The ‘Hive’ will pulsate and buzz with the noise of a real bee colony.”

The artist himself said, “my wish is for visitors to engage with the UK Pavilion as a whole and for the hive to be recognised as a barometer for the health of the earth; drawing parallels between a hive and human society.”

For more, go here. For greater insight into a bright, fully sustainable future, take a look at how the world might be in 2050 in our book, The World We Made; for an in-depth and multidisciplinary examination of our rapidly urbanizing world, consider Living in the Endless City; and for more on fully wired art, consider our book, Art and Electronic Media, coming out in paperback this September.