Konstantin Altunin, creator of the controversial painting of the Russian leader, is seeking asylum in France

Russian authorities may find Konstantin Altunin's picture, Travesty, offensive in many different ways, but to describe it as “distinctly pornographic”, as Vitaly Milonov, the deputy mayor of St Petersburg and the chief proponent of Russia's anti-homosexual legislation is alleged to have, seems overzealous. 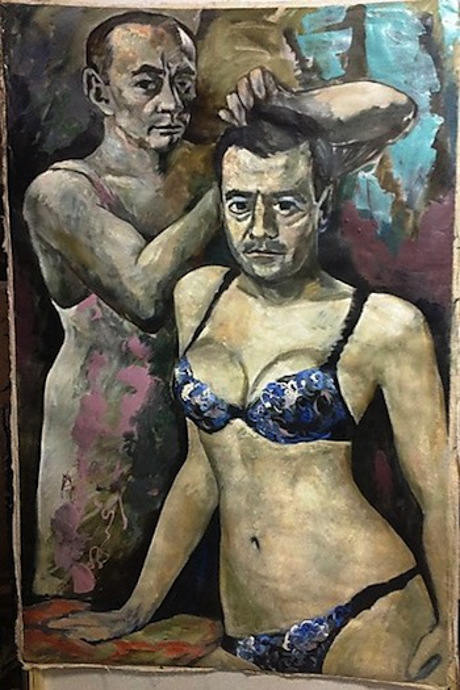 The BBC reports the gallery owner Aleksander Donskoi's assertion that no formal warrant was issued upon the paintings' removal, as well as gallery director Tatiana Titova's claim that Altunin has fled the country following the confiscation and is now seeking asylum in France. Given the treatment of other Russian art protest groups, such as Pussy Riot and Voina, Altunin's departure seems wise.

The Russian authorities' actions, meanwhile, appear to be less clearly planned. International commentators have suggested that this seizure was prompted by St Peterburg's imminent G20 summit; in removing the works the state might have hoped to dampen any untimely criticism of its anti-gay laws. Yet, by seizing the images, it has instead raised the prominence of Altunin's satirical paintings.

To read more about this story, go here. For more on Konstantin Altunin, go here. For a greater understanding of homosexual art and culture, please take a look at our Art and Queer Culture book, and for more on the role the Russian state once played in image making and propaganda, do consider our Iron Fists book.