Imagine a giant blender. Then throw in two parts Saturday morning cartoon, one part art history class, a dash of Hollywood cinema, and several handfuls of Pantone colour chips. Blend thoroughly and out comes the work of prolific Brooklyn-based Jamian Juliano-Villani. Wildly colourful, abrasively saturated, Juliano-Villani’s paintings are hallucinogenic scenes  peopled by barely human creatures in which gravity may or may not apply and the laws of logic certainly do not.

The artist learned to paint by doing: she followed her undergraduate studies with a stint as an artist’s assistant, learning on the job. Working with paint, brushes and an airbrushing  machine, Juliano-Villani creates paintings that are seamless in their attention to detail and finish. Yet for all the slickness of the surface and perfection of the paint, there is an unsettling, agitated quality to her canvases.

Juliano-Villani’s earliest works were made in the dead of night, and the semi-nightmarish quality that she retains grew out of this compulsion to paint rather than sleep. Her imagined universe is one that has gone slightly awry, to say the least. The figures range from the mundane to the grotesque, the demure to the pornographic. Here, the Vitamin P3-featured painter tells us what interests, inspires and spurs her on. 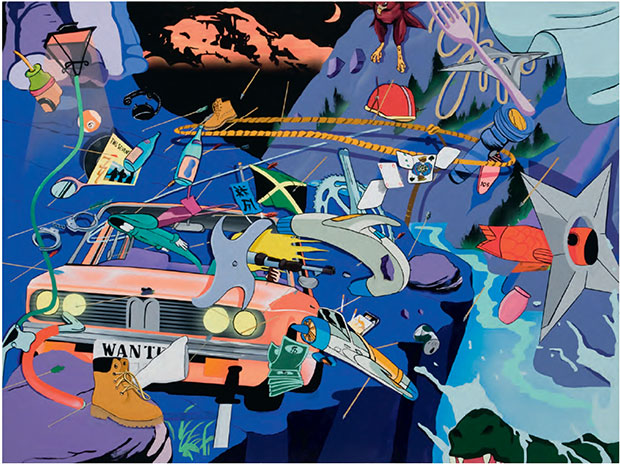 Who are you? I’m a 29-year-old artist, a twin and I live in New York. I love watching scare pranks on YouTube and have a terrible short-term memory.

What’s on your mind right now? I’m always thinking of how to finish paintings - I’m currently thinking of how to finish the ones that were just picked up from my studio for a show with Studio Voltaire in London. I also happen to be on a brief trip to Chicago for the first time and really enjoyed the Art Institute. There is so much insane work there, especially the Ivan Albright and Grant Wood paintings - just as I got to them the guard told me the museum was closing so I’m thinking of ways to go back to the museum before I go back to New York. I’m also wondering if I should go to a used bookstore today while I'm here. 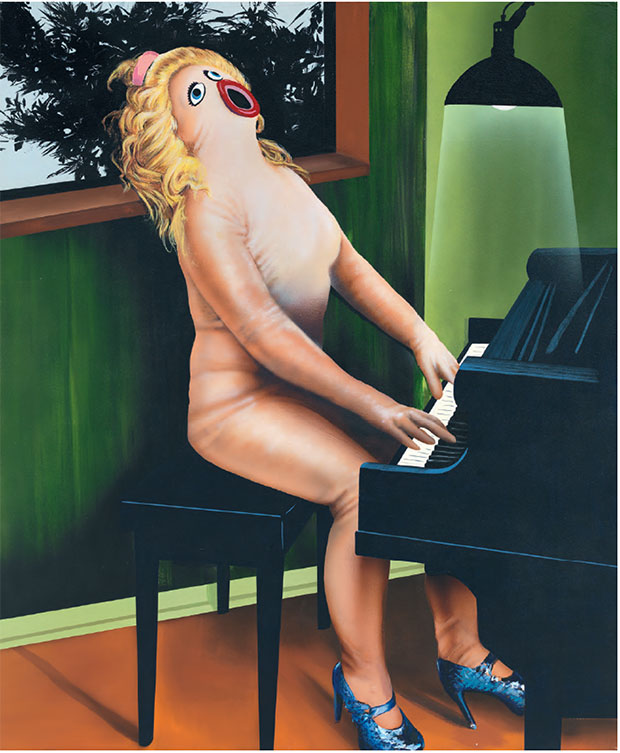 The stuffed animal should be the FDR teddy bear from 1902, "the original" teddy bear. Maybe the teddy bear just had a scrimmage and is drinking Dr. Brown Cel-Ray Soda, or maybe there is some kind of hazing scene going on. I like the teddy bear because it's generic, it's iconic, it's some form of shared sepia toned American memory. But I also like how individual and personal a teddy bear is. It seems like almost everyone had one as a child and that version was unique to them. I like having several ideas at once. 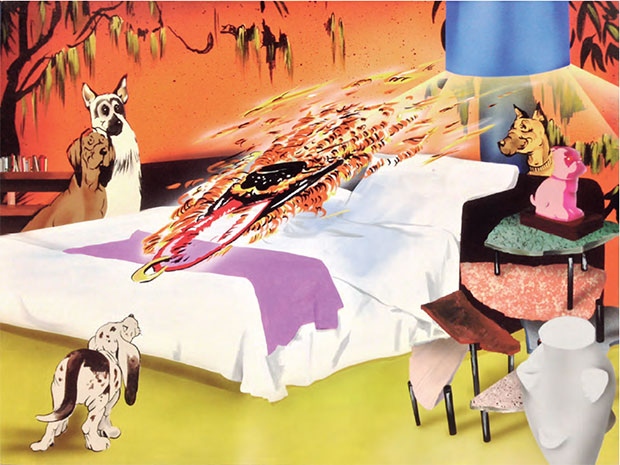 How does it fit together? Barely. It's like trying to fit couch pillows into Tupperware.

What brought you to this point? Probably my ADHD. I just like making things that I haven't seen yet, or making them in my way, which is a way I haven’t seen them yet. I love facts, and history, and cultural ephemera, and art. It seems natural to try to put them all in one place. 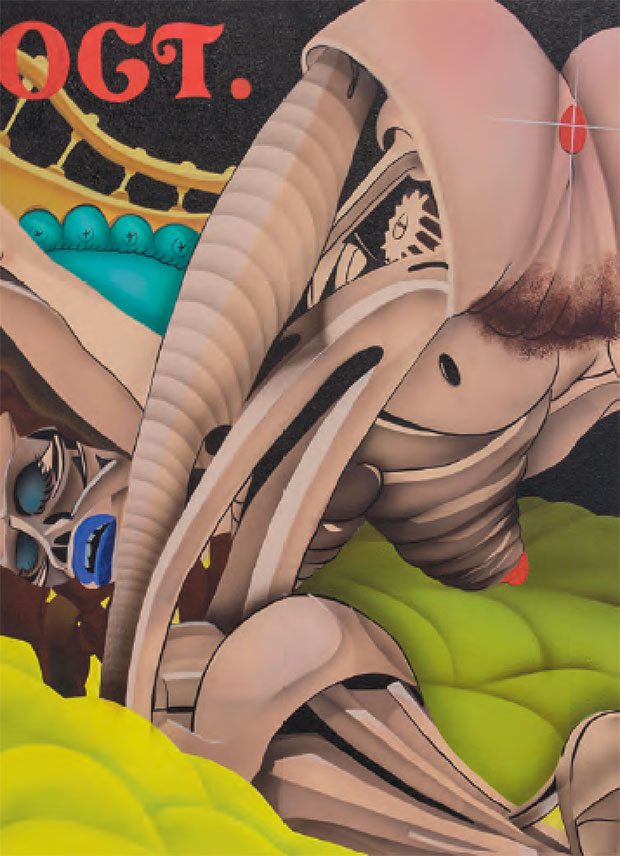 Can you control it? I wish I could focus more though on one idea instead of a million. Some ideas keep coming back or sometimes I will paint the same painting five times restarting it on a fresh canvas over and over again. Still after making many versions, I never show any of them. One example is a Russian wolfhound wearing leather gloves in front of a vanity mirror - I’ve painted that painting at least 4 or 5 times. I don't know what the deal is with that image, there's probably some dumb reason I keep wanting to paint it.

Have you ever destroyed one of your paintings? For every finished painting I put out, there are three shit ones that are almost done that I'll end up trashing. Not everything an artist does is gold. I have about fifty almost done paintings in a giant roll in my studio and I'll never show them. You need to go through a million bad ideas before you get to one good one. 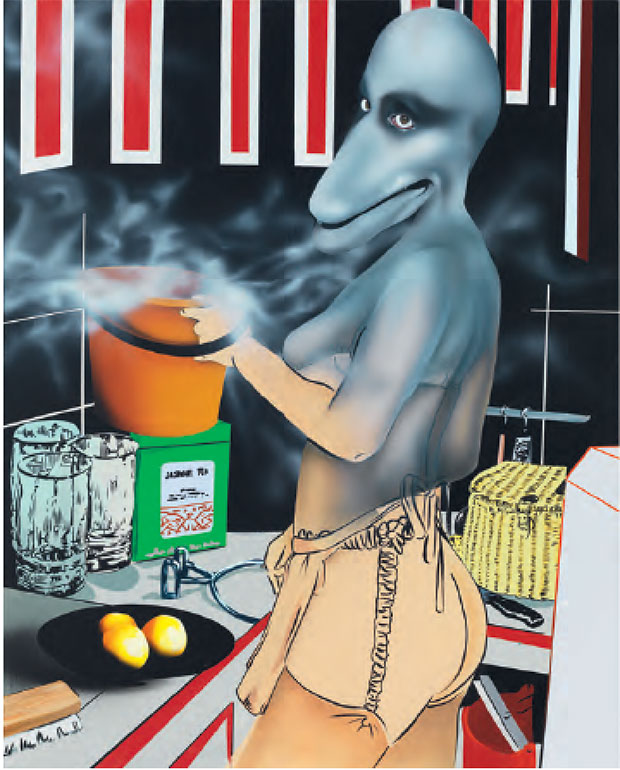 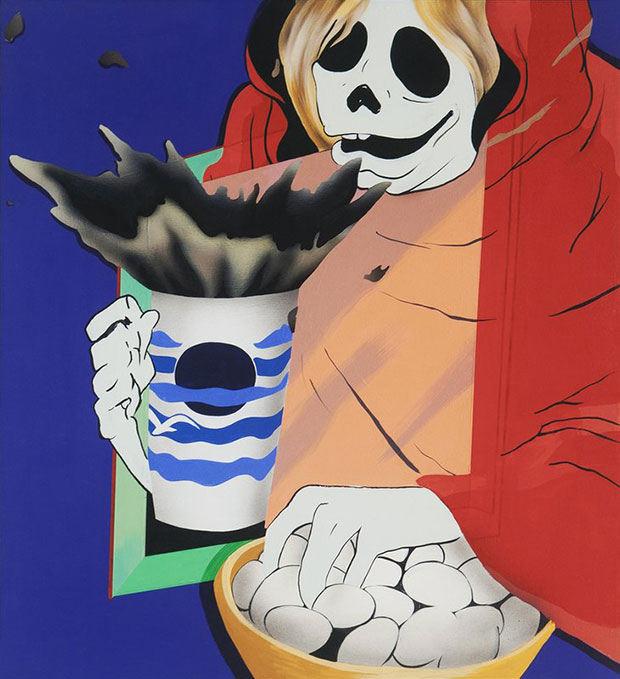 Jamian Juliano Villani The Breakfast From Hell available on Artspace

Find out more about Vitamin P3 New Perspectives In Painting here. Check back for another Why I Paint interview with a Vitamin P3-featured artist tomorrow.  And check out this great print by Jamian Juliano-Villani on Artspace now.

And if you're quick, you can snap up works by many of the other painters featured in Vitamin P3 at Artspace - the best place to buy the world's best contemporary art. And be sure to check out more of Jamian's work at Tanya Leighton and Studio Voltaire.