We like to think of the gallery space as an absence of architecture. These white boxes are bare and colourless because, after all, the art is the thing that's on display. However, a number of contemporary artists view the unadorned, less is more aesthetic of one particular 20th century architect very differently.

The writer, ceramicist and fine artist Edmund de Waal has always paid attention to the space in which his work is displayed. In 2007, around the time of his Kettle's Yard exhibition in Britain, de Waal explained his interest in exhibiting in a Mies van der Rohe building. Here he is quoted in our new de Waal monograph:

“I’ve always been pulled between wanting to show in a Mies van der Rohe space and actually really wanting, or getting very interested in and exercised by, the sheer haecceity, or quiddity of places; in the absolute difference between working in a different kind of volume, on a different kind of wall, different kind of light source. Kettle’s Yard [is] an extraordinary series of unfolding spaces; there is not just one threshold but a series of thresholds throughout the building. Although part of it was built by a Modernist architect, it is absolutely not the Barcelona Pavilion.” 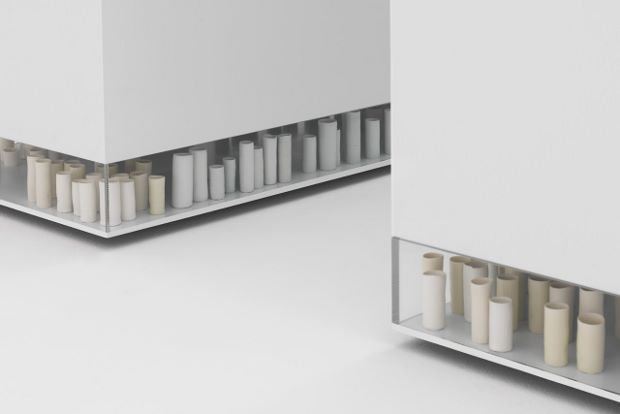 “Haecceity, or quiddity” – it's a great way of describing both what de Waal does and Mies did. In particular how Mies, through his singular attention to both simplicity and details, made his buildings utterly distinct from all others. Yet where one artist sees perfection, another sees an unnatural order.

The Canadian photographer Jeff Wall meanwhile, shares some of de Waal’s sympathies. His photograph, Morning Cleaning, Mies van der Rohe Foundation, Barcelona 1999 (top), features a man squeegee-ing the pavilion's famous windows. As with many Jeff Wall pictures, the figure is not a model, but the actual man employed to wash the pavilion, and yet the picture appears slightly staged, a near-documentary shot to express something Wall sees in Mies’s work.

The photographer has said, “These buildings require an especially scrupulous level of maintenance. In more traditional spaces a little dirt and grime is not such a shocking contrast to the whole concept. It can even become patina, but these Mies-ian buildings resist patina as much as they can.” 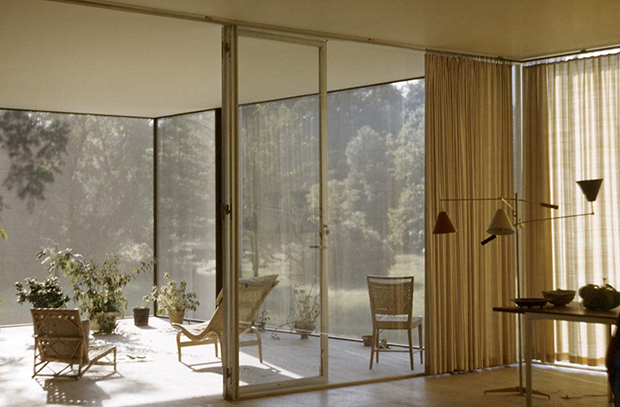 And while, the daytime cleaning of the Barcelona Pavilion reveals an unnatural level order and clenliness, night time in a Miesian house fills Wall with horror. In our new Mies monograph, we quote the photographer’s reaction to Philip Johnson’s Glass House, widely regarded as an homage to Mies’s style and technique:

"At night, conditions are drastically altered. First of all, the landscape disappears in blackness. Even the floodlighting used by Johnson does not mitigate the profound disappearance of natural spectacle, which the occupant depends upon for the process of suppressing anxiety. The interior artificial lighting necessary at night transforms interior surfaces of the glass walls into gigantic mirrors. Certainly these may be veiled with curtains, but the act of drawing them is itself an expression of anxiety, greatly magnified in its significance as are all other gestures made in this house." It's a great description isn’t it? Yet it’s simply another, very human reaction to the radical architecture Mies both influenced and brought into the world himself.

To understand these buildings better, consider our new monograph, Mies. For more on Edmund de Waal, take a look at our new monograph; and for greater insight into Jeff Wall’s pictures and career, go for his book in our Contemporary Artists series (the Barcelona Pavilion picture is on the cover).