Is Maurizio Cattelan bringing a donkey to Frieze NY?

The Italian artist plans to reprise one of his most famous installation works - but just how will he do it?

Is Maurizio Cattelan an artist? The 55-year-old Italian former furniture designer has certainly rejected the term, telling an interviewer in 1999 that “I am not an artist,” while insisting he has retired from any art-making practices on a number of occasions.

Cattelan's display, called Enter at Your Own Risk—Do Not Touch, Do Not Feed, No Smoking, No Photographs, No Dogs, Thank You (1994), consists of little more than a live donkey, lit by an ornate chandelier. By way of explanation, the artist, in a typically self-effacing manner says, that "my first idea was too expensive. My second idea was not possible to realise. So I saw myself as a donkey." 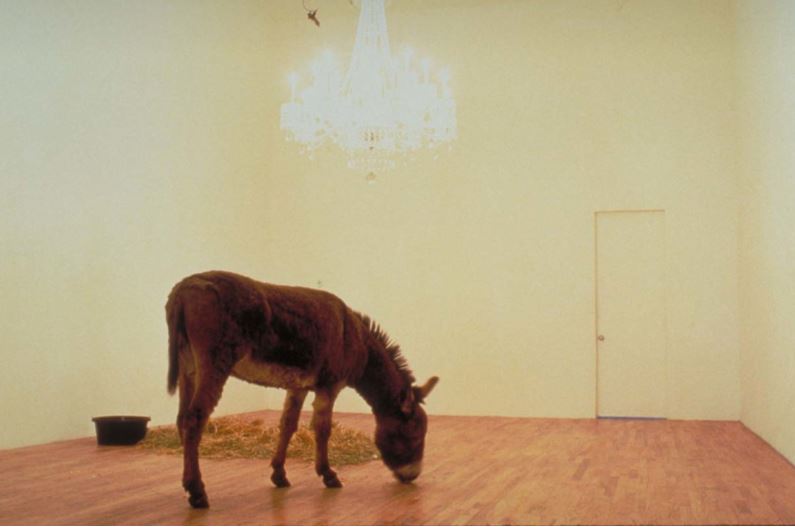 Warning! Enter at your own risk. Do not touch, do not feed, no smoking, no photographs, no dogs, thank you (1994) by Maurizio Cattelan. Photograph: Bertucci Courtesy Galerie Perrotin

Whether Cattelan has truly made an ass of himself remains to be seen. As we explain in our Maurizio Cattelan monograph, Cattelan is in some ways an heir to the legendary Italian 'anti-artist' Piero Manzoni, and chooses to poke fun at art history, the role of the creative genius, as well as the place of monumentality and nationalism with artistic endeavour.

Cattelan is familiar with the post-war Italian Arte Povera movement, which sought to undermine classical artistic ideals with radically simple works. Enter at Your Own Risk... references Jannis Kounellis' 1969 exhibition of 12 real horses in a Rome gallery which had once served as a car garage.

It is hard not to see Kounellis’ display of horse power as somehow calling into question both the supremacy of European fine art and fine European automobiles. Cattelan’s later iteration, meanwhile, is perhaps a meditation on the ways in which the noble, thoroughbred ideals of post-war artists have been reduced to abject pack animals, Cattelan included, a few decades later.

For more on this artist, or perhaps that should be non-artist, buy our newly updated Cattelan monograph, wherein the New Museum’s Massimiliano Gioni surveys Cattelan's work from 2000 to the present. For more on Arte Povera, get this great overview.