When it comes to local architectural styles, the designers of the Ningxia Exhibition Centre had plenty to draw on. The museum is planned for Yinchuan, the 2m-strong capital of Ningxia in the far north-west of China. In fact it’s so far north that it rubs up against Inner Mongolia.

Ningxia – sparsely-populated and mostly desert - is an autonomous region for the Chinese-speaking Hui people, China’s Muslim minority of which there are just shy of 10m across the republic. It was from this group’s heritage that the centre’s architects, Sure, drew its inspiration. “We broke through conventional museum design, taking into consideration the history and the culture of this city,” says Sure, which stands for Sustainable Urban Regeneration and Eco-Architecture.

The practice, which was set up in London in 2006, explains its design thinking. “Our first idea was to use West Xia Helan stone, and using some traditional Chinese techniques we started to work with the stone to create the Islamic pattern. The history of Yinchuan, the tradition of the Chinese Art Stone and the Muslim culture were fused in the design of the Yinchuan Exhibition Centre. It will become a landmark and will be the starting point of the China and Arab Axis; furthermore, Yinchuan is the historical mission of China's bridge to the Arab world.” 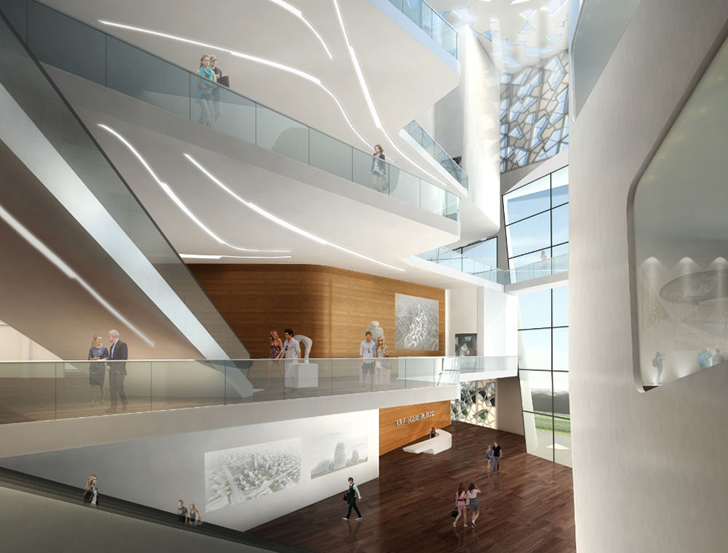 However, while the Hui are the predominant ethnic group in Yinchuan, accounting for more than a quarter of the population, Sure could have chosen from a number of other cultural influences, including Han, Manchu, Mongolian and Chaoxian. Because the city’s mix has resulted in dozens of mosques, pagodas, pavilions, temples and imperial tombs, making it a popular tourist destination.

As it is, the museum’s façade has been carved with a latticed pattern that derives from traditional Islamic designs. The effect will be as striking from the outside, with the building’s lighting shining through the latticing, as it is from the inside, as natural light finds its way in.

What’s more, the architects believe that their configuration of the centre’s five levels with their functional partitions is “a new way of arrangement for the visiting people flow”. If the Yinchuan Government gives the scheme the go-ahead it will get built in a new central business district which is intended to extend the existing city boundaries.