Andy Warhol's long lost film, San Diego Surf, which has lain unedited ever since it was shot is to get a release via the Andy Warhol Museum this year. It was filmed (in colour) by Warhol and Paul Morrisey–in La Jolla, California in 1968 but has remained unfinished ever since. In 1996, the Andy Warhol Foundation commissioned Paul Morrissey to complete the editing, based on Warhol's existing notes and a rough cut.

San Diego Surf was the first time Warhol had made a movie in California since the early Tarzan and Jane Regained, Sort of…in 1963. The month after San Diego Surf filming was completed, Warhol was shot by Valerie Solanas, which just about ended his work behind the camera.

Warhol said about La Jolla: "It was one of the most beautiful places I'd ever seen. We rented a mansion by the sea and a couple of other houses for the people who were going to be in the movie - some of them had flown out with us and the others just met us there. Everybody was so happy being in La Jolla that the New York problems we usually made our movies about went away - the edge came right off everybody. From time to time I'd try to provoke a few fights so I could film them, but everybody was too relaxed even to fight. I guess that's why the whole thing turned out to be more of a momento of a bunch of friends taking a vacation together than a movie." 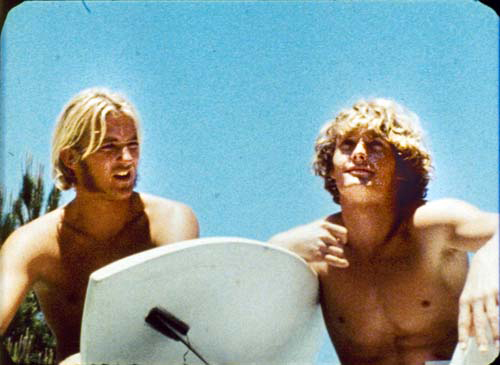 The Warholstars.org website has a lot of interesting information about the premise of the film and the constant police attention Warhol and co were subjected to during its filming - they were forced to include the local police chief's daughter in the movie to get the cops off their back. San Diego Surf is due to premiere at MoMA at the “To Save and Project” festival, which runs October 11 - November 12.

Our Andy Warhol books are among the most popular in the store. Giant Size which everything its name suggests and more is worth a massive 950 points if you join Phaidon Club before purchase.