A high-density High Line for Stockholm

Could this inspired residential railway regeneration project break ground in the Swedish capital?

Ever since its opening in 2009, New York’s High Line has inspired other cities to rethink their defunct railway tracks. In south London there is a proposal for the Peckham Coal Line: a 900m-long elevated urban park built on disused railway coal sidings. Elsewhere there’s the Philadelphia Rail Park, the Goods Line in Sydney, the 606 trail in Chicago, and Rotterdam’s Hofbogen, where the first phase of the 1.9-km-long viaduct project, called the Mini-Mall, was completed in 2011.

Now Stockholm has just released images of a grand railway-related project, which is as much about the built environment as it is about urban greening. Anders Berensson Architects’ brief from Sweden’s Centre Party was to create more housing and workplaces for the city’s growing population. The Stockholm firm’s idea is to convert the city’s railway tracks into high-density housing, office and retail space. 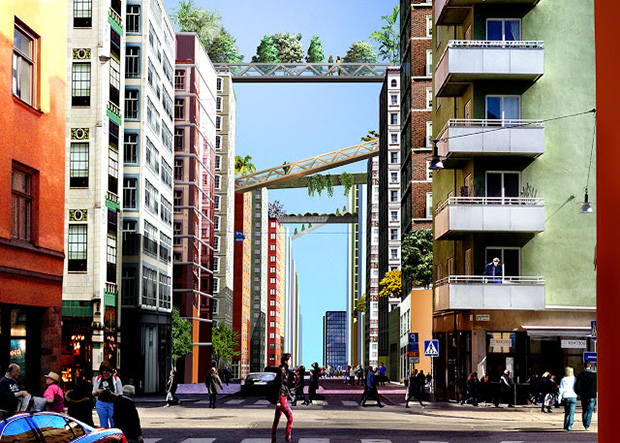 The location in Klarastaden comprises a sliver of land next to the capital’s Central Station, where slim towers of various heights would be connected via high-level pedestrian walkways. This building model would give residents good light and views, and create a ‘green chain walk’, connecting citizens to distant parks and squares. It would also free up some of the previously disused riverfront, which would be turned into foot and cycle-paths. More greenery would grow the rooftops of every building, and in the so-called pocket parks, created by building some towers back from the pavement.

By configuring the scheme in this way, Berensson promises a truly livable neighbourhood of nearly 5800 apartments, 8000 work places and about 300 shops. “One of the most sustainable ways of doing this is to densify the existing neighbourhoods and take advantage of existing infrastructure,” he says. 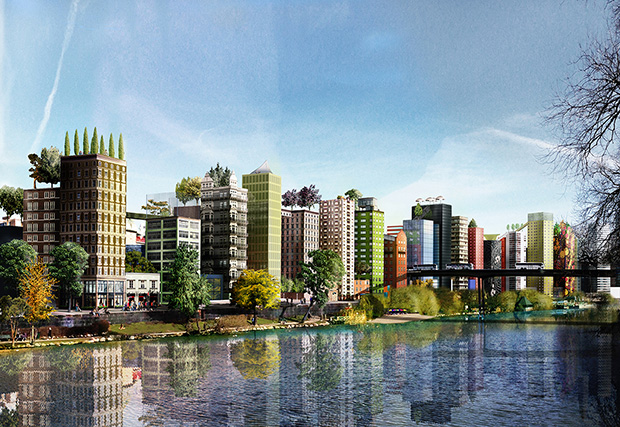 Let’s see if the scheme remains on track. For more on the development and success of New York’s linear park get a copy of our book The High Line; it is  the only first-hand account of the creative inspiration behind the project by the firms responsible, James Corner Field Operations, Diller, Scofidio and Renfro. Also, for more on an early residential proposal for NY’s High Line, take a look at our Steven Holl book.