In 2007, the New York-born artist Tom Sachs staged a manned mission to the Moon, from the gallery floor of the Beverly Hills Gagosian. The voyage (which is documented in a 14-minute video here) was an overwhelming success: Sachs' astronauts reached the lunar surface less than seven minutes after taking off (to applause from a gathered crowd) and, in typical moon-landing fashion, proceeded to erect an American flag.

But the Moon was only the beginning. Unlike its real-life NASA counterpart, belittled by recent funding cuts, Sachs' ongoing Space Program has benefitted from huge growth over the last five years, and is currently in the midst of its biggest mission yet, to Mars. 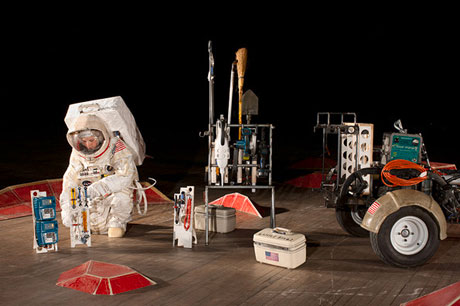 Lifting off from the Park Avenue Armory, "Space Program: Mars", an immersive installation Sachs has apparently been planning since 2005, will provide New York gallery-goers with the much-vaunted opportunity to visit a planet Man has yet to successfully reach. On show are 50 sculptures: landing modules, robust lunar rovers, and suiting stations, crafted meticulously but purposefully imperfectly (the artist believes in the "transparency of construction," more on which later) from materials discovered online or within walking distance of Sachs' discreet studio in the big apple's SoHo district. Even the red planet's dust-riddled surface is on display, rising out of the Armory's vast pine floor. 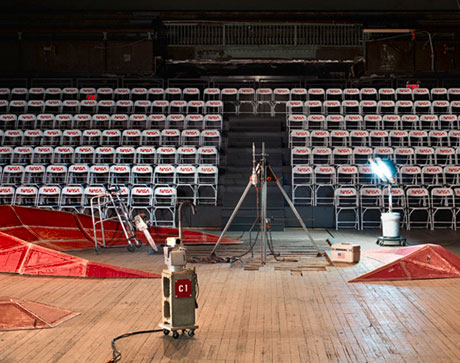 Sachs, and his team of 13 dedicated assistants-cum-astronauts, have transformed the Armory's enormous Wade Thompson Drill Hall into an inter-planetary mission control, filled with everything necessary for a colonisation of Mars. It's hardly standard museum fair, not least for the fact visitors are encouraged to interact with the sculptures. Open a NASA-branded fridge and you reveal it to be full of celebratory champagne, experience Mars' rock-ridden surface during a ride in a working lunar vehicle, or take a drink from a Darth Vader-shaped beer dispenser (one of many exhibits likely not to be NASA-standard but nevertheless a welcome addition).

But that's not all – the artist will be present throughout, excitedly demonstrating his bricolage wares. "The team will "lift off" to Mars several times throughout the residency," the gallery explains, "with real-time demonstrations playing out various narratives from take-off to landing, including planetary excursions, their first walk on the surface of Mars, collecting scientific samples and photographing the surrounding landscape." It's fun, but that's not all it is. 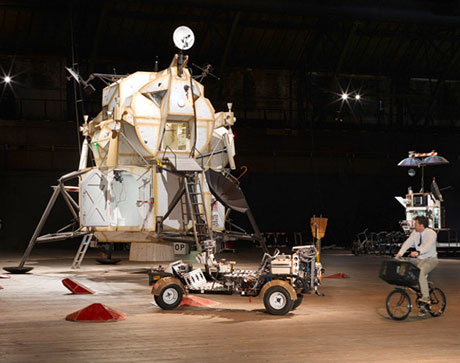 Sachs, with the unbridled enthusiasm of a 12-year-old science fan, is offering serious critique. The show reveals the artist's view of the NASA space programme as performance art – its Moon shots of questionable practical value to the general public. It contemplates life at the frontier – what we as humans bring with us when we explore new worlds (hot nut machines, apparently). And it nods to contemporary models of over-production and over-consumption.

"We're destroying our planet," Sachs recently told Bloomberg News. "The more you use your iPhone, it only gets worse and weaker, while plywood, leather and organic materials tend to improve with age."

The artist's hodgepodge re-use of existing materials – scrapped wood, reclaimed screws and other things unlikely to be used in the construction of a mobile device, let alone a vehicle made to bear the brunt of inter-planetary travel – allude to our current tendency to waste, and emphasise our need for transparency, both in construction, and in use.

"We hope to share our view of transparency," Sachs says. "We paint everything before we cut, so you can see the cut. The issues of the way things are made will come to life through the work."