Tucked between two stone buildings, down a narrow alleyway on the east side of Lake Zurich is the perforated bronze facade of Janus, the Rapperswil-Jona Museum by the unusually-named Swiss architecture firm :mlzd.

Sitting on the shore of the lake, the late 13th Century fortified town of Rapperswil-Jona boasts many stunning buildings dating back over 700 years. Over time, the layout of the buildings had become rather convoluted and it had become difficult for visitors to negotiate the galleries in places. 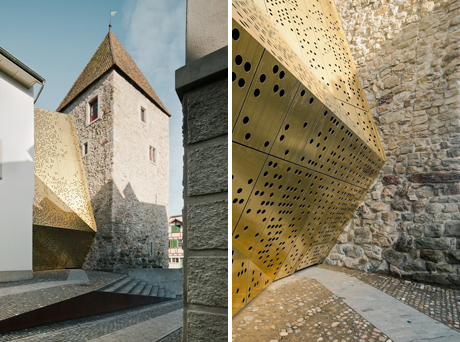 The original building comprises a fortified tower and a residential building built in the 13th century. A number of the extravagant interiors from the 16th century have been preserved and also form part of the museum, which opened in 1943. "The shape of the new building has been developed from the lateral facades of the old buildings. The facade and roof have been design in such a way that the existing windows and doors of the old buildings are not intersected anywhere," say :mlzd. 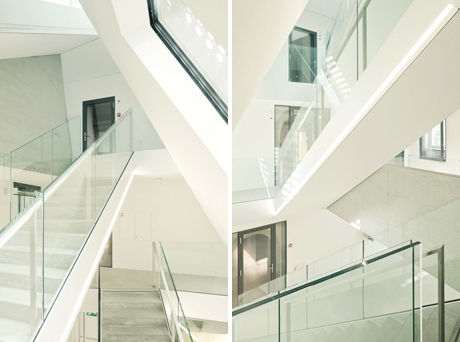 The brief called for the the main view of the town from the north side to remain unchanged. The perforations in the bronze facade allow natural light into the stark white interior in a controlled and precise manner. Visitors can move freely through the cavernous angular spaces of the museum as light floods down stairwells and through glass partitions. The convoluted nature of the previous buildings is opened up to reveal views of the inside and out into the town below. 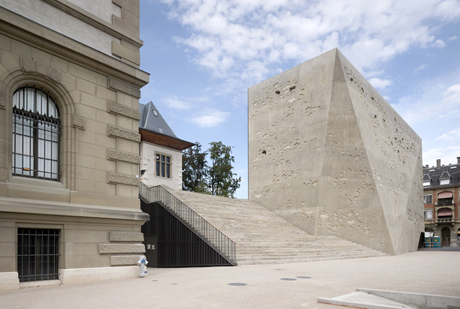 Founded in 1997 in Biel, just outside the Swiss capital Bern, the firm, which prides itself on the diverse culture of its office has a couple of other innovative projects in its portfolio. Titan is an addition to the Historical Museum, Bern, its concrete, angular and perforated shapes almost a precursor to those of Janus. And in 2004 the firm completed work on _Inlay_, the redesign of an antechamber at the UN chamber headquarters in New York to celebrate Switzerland's accession to the UN in 2002. 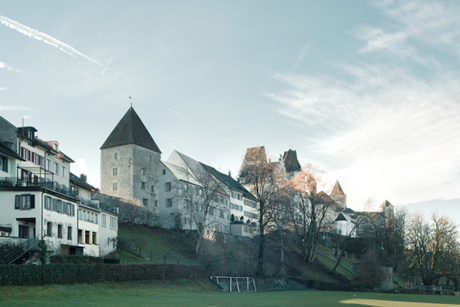 Rapperswil-Jona from the north side