To mark her MoMA show, we examine the moment the artist invited her audience to cut off her clothes

Walking up onto a concert hall stage and snipping the clothes from a 31-year-old, passive female artist is a provocative act, even 50 after Yoko Ono staged such a performance. Yet it's one that visitors to New York’s Museum of Modern Art are returning to once more, following the opening of a new Ono retrospective.

Yoko Ono: One Woman Show, 1960–1971 draws together 125 early objects, works on paper, installations and performances by the 82-year-old Fluxus artist. Of course, the performance pieces cannot be entirely re-staged, however MoMA is screening footage of Yoko Ono’s better-known ones, including Cut Piece from 1964. 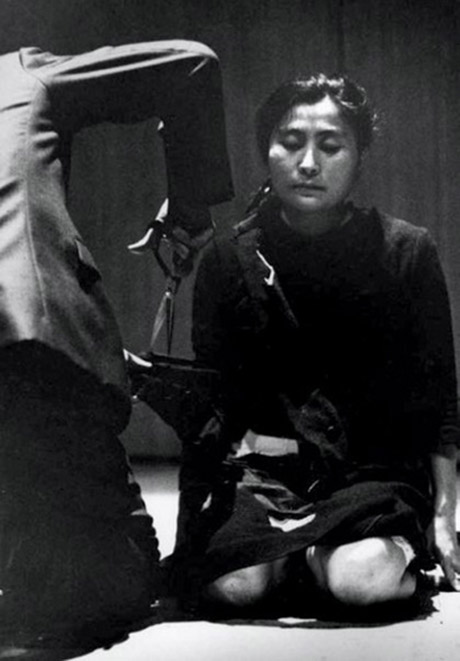 This work, first staged on July 20, 1964 at Yamaichi Concert Hall, Kyoto, examined in a disarmingly simple way, the role the female body has played in art throughout the ages. How should we regard it today? Perhaps as a work that, despite its novelty, keys into earlier artistic concerns. For example here’s how our book Art and Feminism puts it:

“In this performance Ono sat on a stage and invited the audience to approach her and cut away her clothing, so it gradually fell away from her body. Challenging the neutrality of the relationship between viewer and art object, Ono presented a situation in which the viewer was implicated in the potentially aggressive act of unveiling the female body, which served historically as one such ‘neutral’ and anonymous subject for art. Emphasizing the reciprocal way in which viewers and subjects become objects or each other, Cut Piece also demonstrates how viewing without responsibility has the potential to harm or even destroy the object of perception.”

The work remains a key piece within the Fluxus art movement, because of the way it engages with an artist’s body, but also thanks to the manner in which it breaks down the distinctions between art and life. As our book Art in Time explains, “Fluxus transformed art from an object of aesthetic contemplation to a gesture of political action.

Fluxus leader George Maciunas summarized the themes found in much of Fluxus work in his Fluxus Manifesto. Cut out dictionary definitions of ‘flux’, which emphasise its bodily character – a flow of fluids and discharge – were interrupted by his handwritten statements calling for a fusion between art and reality.” Ono’s Cut Piece fits this brief perfectly.

You can view an excerpt of Ono’s 1965 performance at Carnegie Hall above, find out more about how her work fits into a greater feminist narrative in Art and Feminism, and for more on its place within corporeal art, check back soon for more news about our Body of Art book.