We chat to the artist, designer and leader of Google's Data Arts Team at the Barbican’s new immersive art show

Digital Revolution, the Barbican’s new exhibition of digital art, design, film, music and videogames opens at the London venue tomorrow. Beginning with the earliest consoles and finishing off with some of the newest interactive experiences, the show, which runs until 14 September, is the first to bring together so large and diverse a selection of artists, filmmakers, architects, designers, musicians and games developers, each working at the very forefront of their fields; from Tim Berners Lee to Lady Gaga’s technical fashion lab, Studio OX, it’s all here.

At the press view earlier today we caught up with Google’s Aaron Koblin, and artist and designer who heads up the firm’s Data Arts team, to talk about Johnny Cash, Arcade Fire, how technology and humanity can remain on good terms, and why the digital arts haven't tackled our sense of smell. 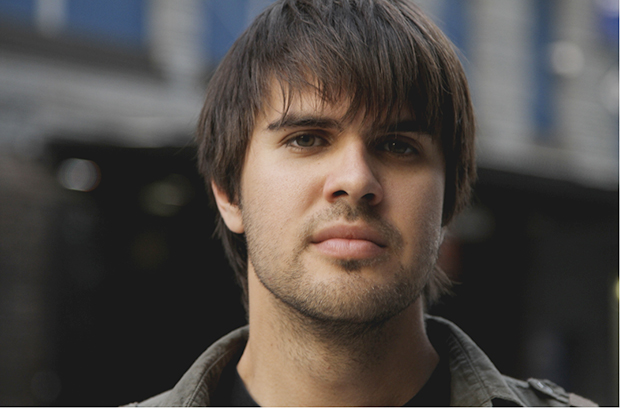 Could you tell us a little bit about your background? I’m an artist and designer who uses technology to create data visualisations and interactive experiences. I’ve a MFA from UCLA in Design Media. I started off studying computer science and switched to fine arts. My work’s always been a fusion of the two.

Describe your relationship with Google. I’ve been at Google for six years. I lead the Data Arts Team; we’re a group of hackers and tinkerers who work more on the experimental side of things. We run a site called Chrome Experiments. It’s not about playing around with the latest dropdown menus, its more investigational than that; it wouldn't have a home if Google didn't look after it.

What do you have in this exhibition? There are a few collaborations of mine. The most prominent is The Johnny Cash Project with [video director] Chris Milk, for the Johnny Cash song, Ain’t No Grave.

You worked with Chris Milk on an Arcade Fire video, didn’t you? Yes, on a video for the song The Wilderness Downtown. That project allowed you to type in the address where you grew up and it put your hometown into the video. It was a good fit for that song.

This Johnny Cash project, however, relates back to something I did in 2005, called Sheep Market. That was, I hope, a delightfully critical take on Amazon’s Mechanical Turk. The Mechanical Turk is an online workplace that uses the idle cycles of human minds. They ask people to do tasks that are hard for computers to do but easy for humans, and they pay you to do these tasks.

Drawings from The Sheep Market

What sort of tasks? It can be anything, and it’s totally decontextualised and anonymised. You can be asked to anything. For The Sheep Market, my request was, “draw a sheep facing to the left”. The payment was two cents. There were 7599 unique IP addresses that responded to the task, and only one of them asked why. Everyone else drew their sheep and got their two cents and moved on. The whole thing cost $200, which felt like a lot back then, when I was at grad school. I then exhibited the sheep drawings and sold the illustrations in bulk. It was interesting, because people felt they were being taken advantage of. It started off as a job for them, but became a personal creation.

How does this relate to Johnny Cash? I was talking to Chris about that project. I thought The Sheep Market was a great way for people to make things together, to create something bigger than the sum of its parts. Chris is friends with Rick Rubin and Rick was finishing Johnny Cash’s last album. He thought this song would be great for this treatment, as it's basically him singing about his virtual resurrection.

Chris cut together a bunch of archival footage, edited to eight frames a second, and we allowed people to redraw those frames. At eight frames per second, it was slightly too fast to let you perceive everything, but slow enough that individual frames could burn into your memory. The illustrations were animated into a video, but instead of making just one music video the we’ve created a dynamic one that’s changing all the time. You could choose a video with abstract drawings, or a pointillist version, or just choose frames at random.

How were the frames that people drew for the Johnny Cash Project different from the illustrations that went into the Sheep Market? There was a whole different level of passion. We shot a short documentary, and people talked about what Cash meant to them. Some were on the verge of tears.

Are there pre-digital artworks that serve as a precursor for the kind of works on show here? I think so. Chris and I worked on a group animation project with the Tate Modern, called This Exquisite Forest, where people submitted animations, which lead one on from the other. The name was taken from the old surrealist game, Exquisite Corpse. There are other examples, such as groups of people making small figurines out of clay, and even street art, which can be a collaborative dialogue.

You also had a hand in the huge, outdoor interactive sculpture, Unnumbered Sparks by Janet Echcelman. That seemed to be an effective way to bring people together. What I really liked was that it was an experience that required digital technology, but the technology just falls away. Janet makes these beautiful illuminated net sculptures. We realised that we had this opportunity to make an installation to engage in real time with people via their mobile phones. It enables people to see the expressions on each others’ faces, rather than just talk about what they’re doing. They’re looking at the sky and each other, rather than just looking at their phones.

Digital art is good at communicating that communal experience. It doesn’t seem quite so good at other aspects of life. What can’t digital art do? Well, there are huge holes, like smell; that’s completely unaddressed by digital artworks, and that’s a huge part of our lives. What’s happening now in the virtual reality space is quite exciting, but it’s really early. And digital technology can connect people across the planet, but you lose the nuance. I’m optimistic, I think we’re finding more a more broad opportunities and capabilities, but there’s no substitute for real life.

So, what is digital art good at? For me we live in a time when technology moves forward, and it’s important that our humanity and our culture keeps up with it. We have the potential to use those technologies to enrich our communication and story telling today.

What’s next for you? I’m working on phase two of Light Echoes, a project with my friend Ben Tricklebank.  It began with Doug Aitken’s Station to Station. Doug said, “What would you do if you had access to a train?” I said I’d put a laser on it and paint the landscape. So, we put a laser on train tracks and we started to do that; you can see the results at lightecho.es. We’re developing that, but I can’t tell you much more right now.

Find out more about Aaron's work here. For more on the Barbican show go here. For a good grounding in these sorts of works consider our book, Art and Electronic Media. You can also look out for further interviews from Digital Revolution over the next few days.