There's one prominent resident on The Mall in London who will probably appreciate The Turner-Prize winner Mark Wallinger's new sculpture, which is being installed on the north eastern edge of this famous thoroughfare later today. Her Royal Highness Elizabeth II, while not renowned for her love of contemporary art, does adore horses. There are sixteen paintings by George Stubbs (1724-1806) listed in The Royal Collection and most of them feature four-legged subjects. Perhaps, as she travels from her London residence, Buckingham Palace, at the western end of The Mall, she will catch sight of Wallinger's life size marble and resin rendering of a thoroughbred and smile.

Although Wallinger acknowledges that his horse artworks owe a debt to Stubbs, the sculpture's intended audience are London's many overseas visitors, as it stands outside The British Council's building, and has been unveiled to mark the beginning of its 2013 arts programme, which will focus on the Middle East, Russia and South Africa. British audiences further a field will have to wait for Wallinger's more famous horse sculpture, which, although commissioned four years ago, has still yet to trot into the public sphere. 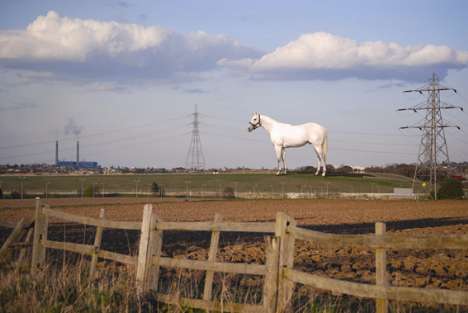 The artist's impression of how the Ebbsfleet White Horse might look.

Back in February 2009, Wallinger was commissioned to produce a 50-metre high white stallion to stand beside Ebbsfleet International train station, in Kent, southern England. However, when original costs rose from £2m to £12m, the project's original backers - Eurostar, London and Continental Railways, and Land Securities- chose not to meet the higher costs. Wallinger's London dealer, Anthony Reynolds, told The Art Newspaper today that he and the artist are still speaking with these original backers, "to find the funding for the next stage of design and construction." We hope someone ponies up the £10m shortfall, though for the time being we'll settle for a smaller horse. To find out more about Wallinger's horse, read The Art Newspaper's story, and for more on large-scale public sculptures installed in the natural environment, consider our Land and Environmental Art book.