All you need to know about Adam Pendleton

“Somebody recently asked me, ‘How does racism in America figure into your work?’” says the young African-American artist Adam Pendleton in his new Contemporary Artist Series book. “And my response was, ‘We’re not what they say we are’.” 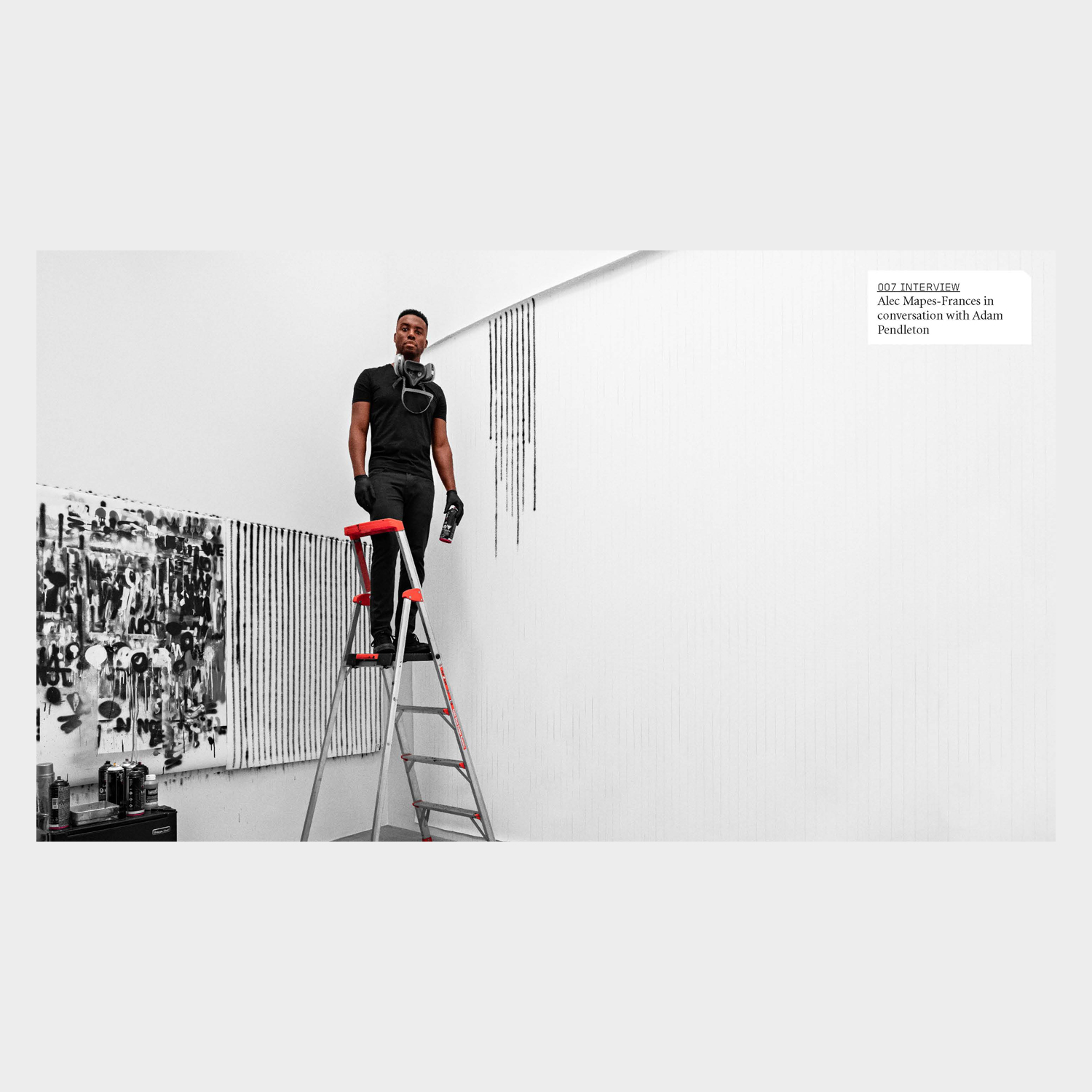 A spread from Adam Pendleton, featuring the artist at work

Born in 1984 in Richmond, Virginia, he graduated from high school two years early, and studied in Italy before moving to New York at the age of eighteen, intent on becoming an artist. Succeeding remarkably quickly, Pendleton gained a reputation for visually arresting works, often filled with words that weren’t easily reconciled. Though the art he produces is largely black-and-white, Pendleton instils everything with gradations, forcing viewers to rethink the way they might approach a simple line of text, canvas or video clip.

Consider this important, early performance, The Revival, from 2007. “The Revival took the format of a religious service,” writes curator Adrienne Edwards in our new book. “A twenty-eight-person choir, clad in black robes, enters the capacious Stephan Weiss Studio and takes its position on two-part, multi-tiered plywood platforms, in total darkness, except for a music stand, lit from above.

“We hear Pendleton reciting text that he has composed in a measured, methodical cadence, meandering through repetitions of phrases about ethical and political values. The space is gradually illuminated as Pendleton spits out what he calls ‘symbols’ – vernacular, hate-filled speech acts common to the Dozens, a game of spoken words between two contestants played out in black communities in the United States, whose aim is to insult with the greatest flair. Then he emerges, austerely dressed in a white jacket and Oxford shirt, gleaming black pants and fluorescent yellow sneakers, walking into the centre of the space to ascend a square, raised platform as interdisciplinary artist Jason Moran plays the piano. Pendleton repeats the phrase he first uttered at the start of the performance: ‘We lived on a small island stone nation, love’. 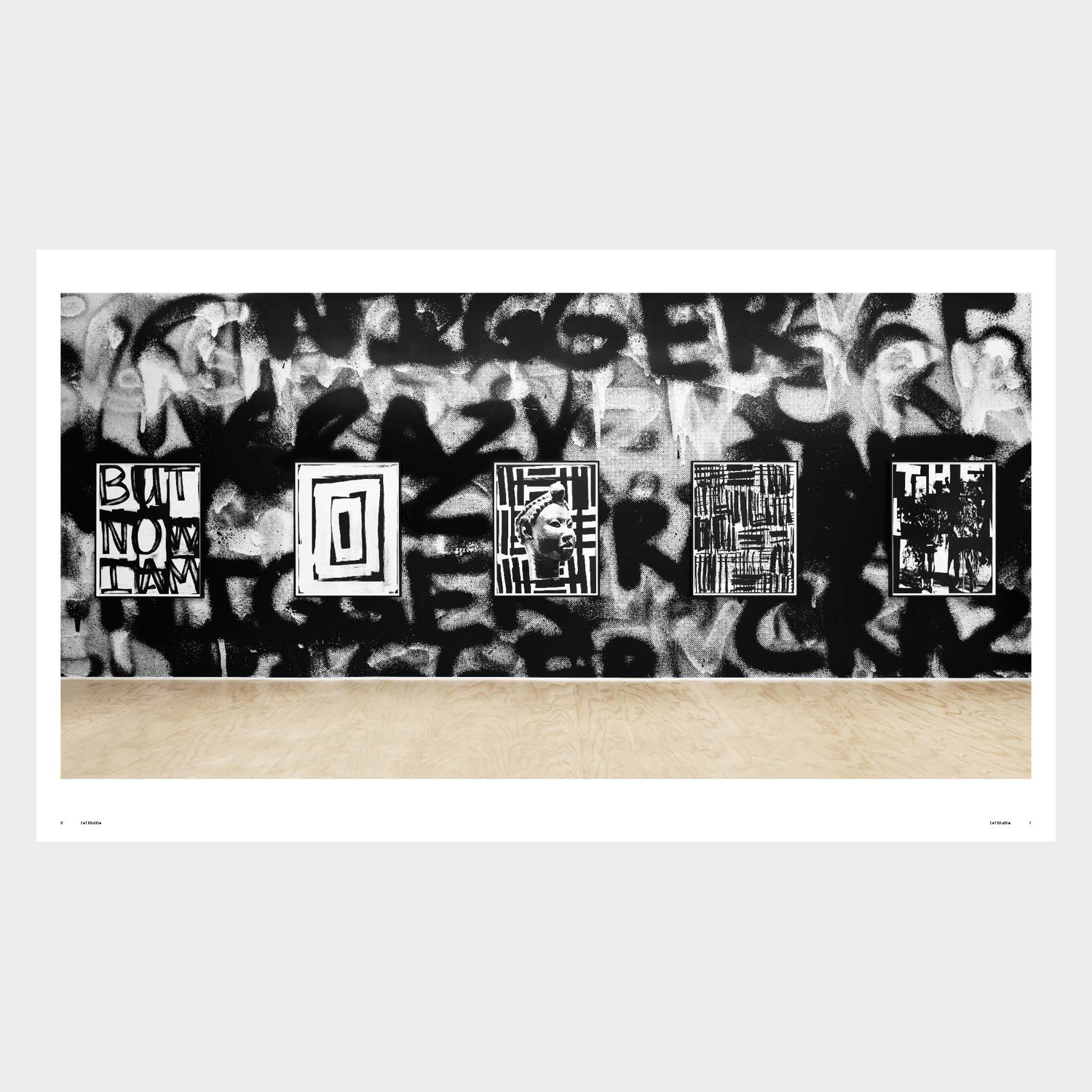 “Ten minutes into the piece, the choir’s music swells with the sonic beauty of a hymn. As the artist articulates words such as ‘fat chance’ and ‘erotic’, the choir responds a cappella: ‘Glory’. The incongruence of these verbal offerings creates a tension that is the result of the profane or the mundane being placed in direct relation to the sacred. In Pendleton’s sacrilegious sermon, he tells us: ‘The experience of language is not isolated. It is an act taking place in the world like all else. It is not the act, separate, describing the world. It is, it occurs, in real time.’”

The incongruity of the performance is only compounded when you find out where some of Pendleton’s works came from. “To achieve this sense of discord, Pendleton extracted poet Donald Hall’s Without (1998), where the loss of syntax and punctuation literally materializes the reality of Hall’s wife suffering and dying; Paolo Javier’s 60 lv bo(e)mbs to lv (2005); John Ashbery’s ‘From Estuaries, from Casinos’ (1992); a collection of essays on Language poetry by Charles Bernstein, Content’s Dream: Essays 1975–1984 (1986); gay activist and writer Larry Kramer’s infamous speech The Tragedy of Today’s Gays (2005); playwright Howard Barker’s The Castle (1985); architect Rem Koolhaas’s influential tome S, M, L, XL (1995); and civil rights activist and politician Jesse Jackson’s address before the Democratic National Convention when he ran for the American presidency in 1988, among others.” 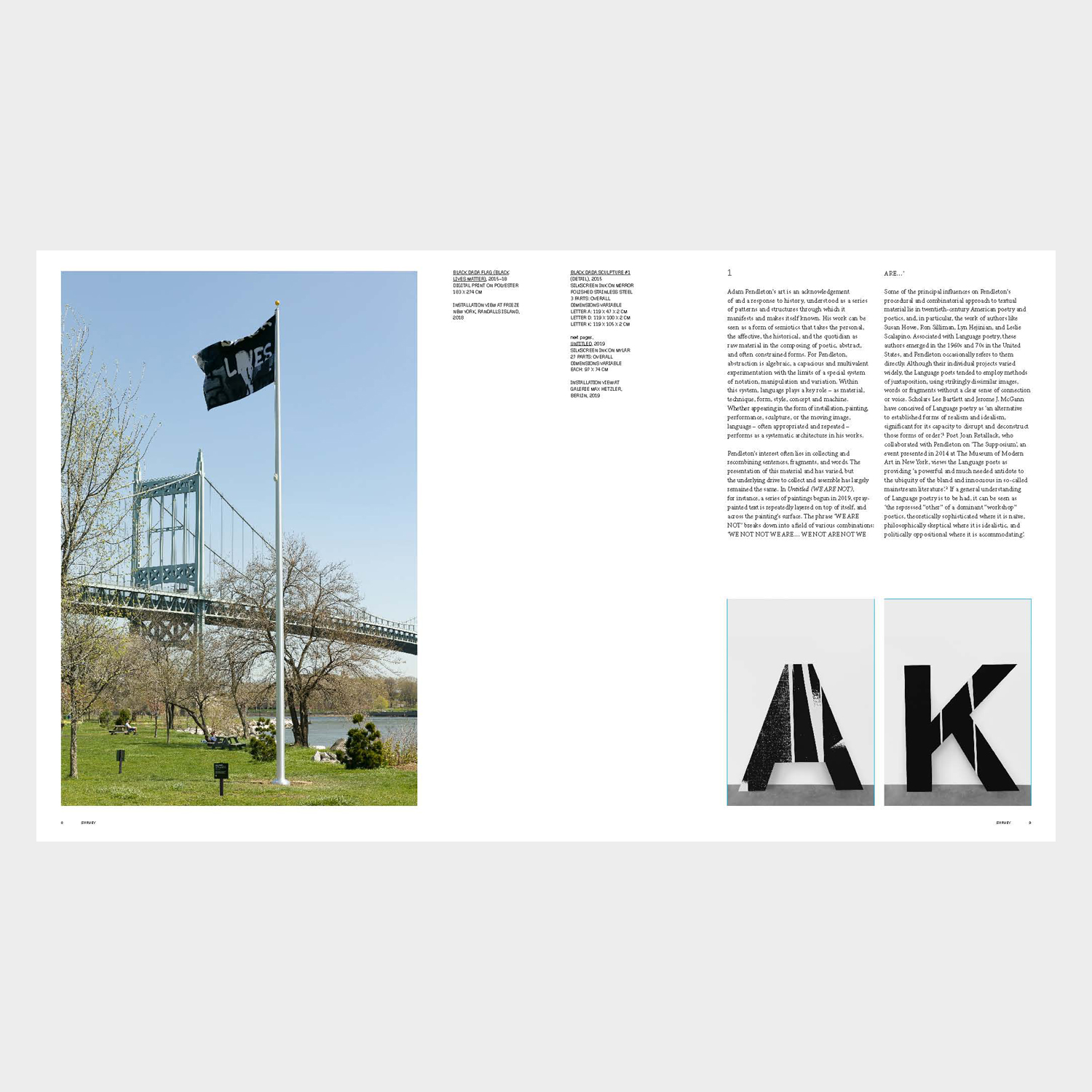 This wild selection of sources is apparent in his video portraits, a series of moving image works focussing on figures such as the artist Lorraine O’Grady, and the dancer Ishmael Houston-Jones, in which they read from Pendleton’s script. “As a system of communication, language oscillates in these works between affinity, as in a desire to convey a shared relationship, and alienation, as in the function of dissonance in the use of fragmentation, montage and collage,” writes Edwards.

It’s also there in his best-known series of works, Black Dada. This began as a 2008 text which draws on 20th century avant-garde sources, as well as more recent, US material to “problematize the relationship between conceptual art and civil rights, or the avant-garde and black history,” as Pendleton puts it.

He continued the project in a series of Black Dada paintings: simple, monochromatic, near-minimalist works that follow a set formula. “Pendleton crops, scans and enlarges small fragments of photocopies of So LeWitt’s Sol LeWitt’s Incomplete Open Cubes (1974) [ in which LeWitt systematically explored the 122 ways of ‘not making a cube, all the ways of the cube not being complete’], white-painted structures, capturing a plane, a corner or an edge,” writes Edwards. “The enlargement is then divided horizontally into halves to form a new whole: a 96 x 76 inch diptych. Superimposed on the image, the words ‘Black’ and ‘Dada’ are set in Arial Bold capitals, which Pendleton aligns with the edges of the frame. Letters are subsequently subtracted from each word until only a few remain. Each painting’s subtitle reflects the remaining letters. The floating planes cut from LeWitt’s cube and applied to fill the composition have an aesthetic affinity with the hard-edge abstractions of artists such as Virginia Jaramillo, Kenneth Noland, Alvin Loving, Frank Stella and James Little. The number of letters and edges varies from painting to painting such that some feature as many as six letters, while others have only one or two, and sometimes only a single edge of the enlarged cube.” 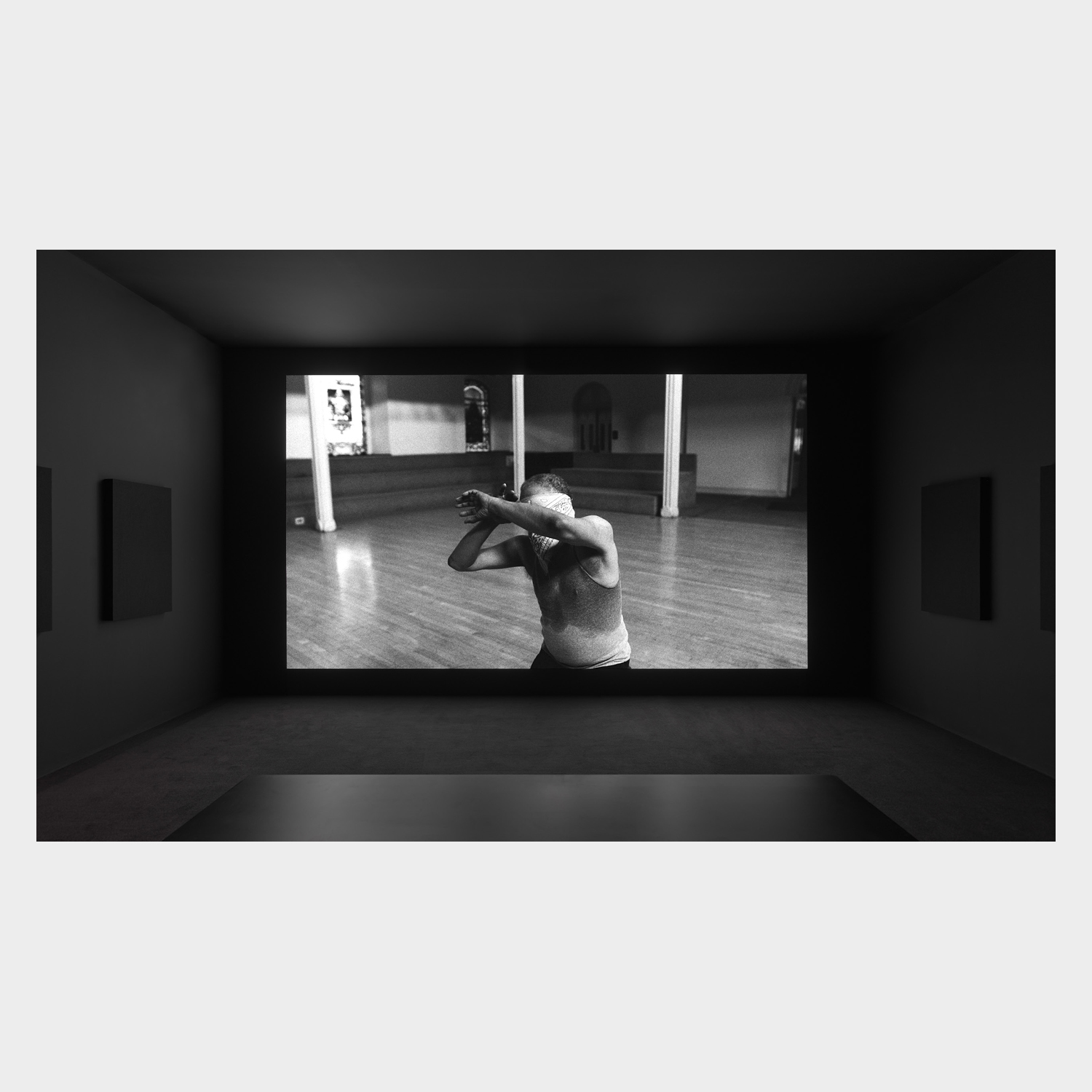 It’s a simple recipe, with an inscrutable meaning. “I can tell you what they are – there’s almost an ingredient list – but the actual encounter is still very strange,” says Pendleton. “I like that. It turns out that the painting isn’t what I say it is.”

Of course, our new edition does offer some keys to understanding his work. In particular, Edwards draws attention to Pendleton’s admiration for poets such as “Susan Howe, Ron Silliman, Lyn Hejinian and Leslie Scalapino. Associated with Language poetry, these authors emerged in the 1960s and 70s in the United States, and Pendleton occasionally refers to them directly.

“Although their individual projects varied widely, the Language poets tended to employ methods of juxtaposition, using strikingly dissimilar images, words or fragments without a clear sense of connection or voice. Scholars Lee Bartlett and Jerome J. McGann have conceived of Language poetry as ‘an alternative to established forms of realism and idealism, significant for its capacity to disrupt and deconstruct those forms of order’.”

The book offers more concrete references, pointing out that Pendleton’s Untitled (WE ARE NOT) (2019–) paintings, refer back to “Tristan Tzara’s satirical ‘Manifesto of Monsieur Antipyrine’,” writes Edwards, “delivered at the first public Dada soirée in Zurich in 1916 (‘We are not naive / We are successive / We are exclusive’).” She also notes that Band, Pendleton’s first video work, from 2009, which documents San Francisco band Deerhoof in the process of creating and recording a new song; and overlays audio from Teddy, a 1971 short documentary film about a single day in a black American youth’s life, draws on draws on Jean-Luc Godard’s 1968 film, Sympathy for the Devil. And she points out that Pendleton’s 2016 painting, Untitled (A Victim of American Democracy), takes its name and collaged words from Malcolm X’s 1964 speech ‘The Ballot or the Bullet’.

There’s plenty of direct source material from Pendleton himself, with beautiful reproductions of his most famous works, as well as photographs shot during a studio visit, archive material and plenty of his own writings. 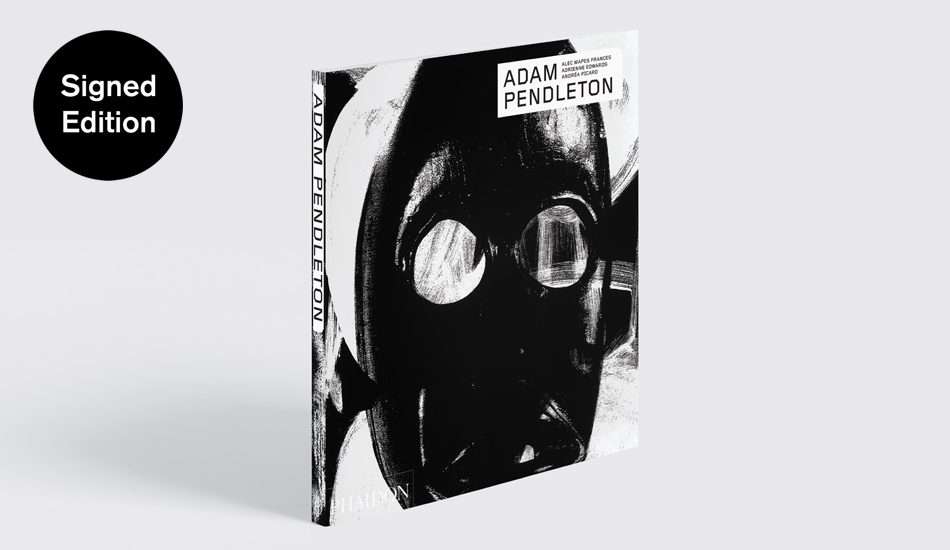 Signed copies of Adam Pendleton are available currently in our store

The book with satisfy gallery goers eager to gain a better understanding of this important contemporary artist; anyone with an interest in art history or the history of civil rights will be drawn in by the way this artist shuffles and presents diverse texts and images  in compelling new ways; and readers keen for a fresh perspective on contemporary race relations will find much to admire in this new monograph. To find out more and order your copy go here.