How do you cram the work of Keith Haring into a single retrospective? Far from restricting himself to simple canvases, the 1980s New York artist painted in nightclubs, on the subway and the street, created large-scale sculptures, and even opened his own merchandising shop, prior to succumbing to an AIDS related illness on 16 February 1990.

A new Parisian retrospective, Keith Haring: The Political Line, which opened last week and runs until 18 August 2013, overcomes this problem of scale by displaying the exhibits across two venues: The Musée d’Art Moderne de la Ville de Paris houses the majority of these 250 or so works, while the cavernous, 39,000-metre square Centquatre arts space across town, takes the larger-scale pieces, including The Ten Commandments, a ten-panel painting from 1985. 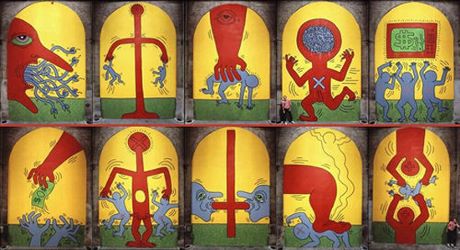 The Ten Commandments (1985) by Keith Haring

Le Centquatre, a former municipal funeral parlour in the north-eastern side of the city which opened as an arts space in 2008, is perfectly suited to these monumental works, while the Musée d’Art Moderne can tell a more carefully calibrated story of an artist.

As its title suggests, the exhibition explores Haring's social and political obsessions, not only in terms of gay rights and AIDS awareness, but his regard for South African apartheid, nuclear weapons, and economic injustice. With all his bright figures, his relationship with Warhol and his hip status in the downtown New York club scene, it's easy to bracket Haring as a pop culture icon, with exploring his more detailed work and concerns. This Paris show, both in terms of scale and ambition, doesn't allow for such sloppy thinking. 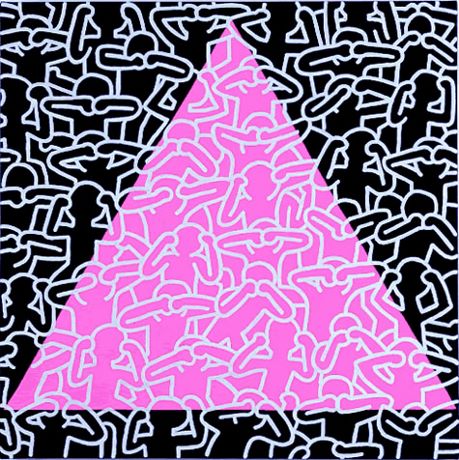 To find out more, visit Musée d’Art Moderne's site. For further background on the Haring's life and work, please consider our new book, Art and Queer Culture, the first major historical survey to consider the ways in which the codes and cultures of homosexuality have provided a creative resource for visual artists.