Contemporary art tends to prize intelligence. Contemporary dance often features performers with near-perfect bodies. However, one of the best projects at this year’s Frieze London art fair, which opens next week, focusses on a theatrical troupe which goes against these trends.

Frieze, in conjunction with London’s Dance Umbrella festival, is staging the London debut of Jérôme Bel’s Disabled Theatre, as one of its Frieze Projects. Bel, a leading French contemporary choreographer, began this project when he chose to collaborate with Theater HORA, a Swiss company made up of professional actors with disabilities. Since first staging this performance in 2012, he and HORA have toured Europe, East Asia and the US, appearing at  dOCUMENTA (13), The Avignon Festival and Seoul’s Festival Bo:m. Here he explains to Phaidon how the production first came about, what’s reduced his cast to tears, and why the bourgeois often have a problem with the show.

You first saw Theatre Hora’s work when they sent you some DVDs of their performances. What did you see in that footage? And how did it make you feel? When I first saw them, I had not really watched mentally challenged people. I was not used to watching them, as I had been raised with the idea I shouldn’t look at them because they would feel bad. So in a way, I haven't ever seen them, and I think that is a pity. To watch is a way to learn. If you don’t look at something it doesn't really exist. So it was a discovery, a huge surprise, a shock. Secondly, I saw a way to be on stage that was totally different. The presence of those actors is very impressive. They are present in the way that only very, very good actors can be. In a way they reminded me one of the best actresses I know, Jeanne Moreau. 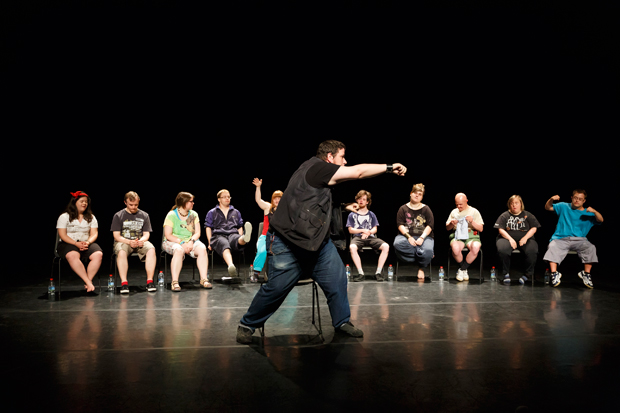 Disabled Theatre at he Avignon Festival

When you decided to create Disabled Theatre, what do you think you added to Theatre Hora’s repertoire? I’ve no idea. They invited me to work with them, and gave me total freedom and support. I didn’t know until the first performance in dOCUMENTA what I had done with them. Personally, I have found a connection with the performers, but maybe this is very personal and won’t be shared by others. Over the years, the piece has been shown all over the world, and has provoked a lot of reactions, both bad and good; there’s been little indifference, which I think is great.

How does a performer’s learning difficulties add to the performance? Well, the piece has been made for them. I build the piece in regards to what they are and how I see them. I wanted them to speak on stage, to explain who they are and their relation to the world. This was not easy. Then I asked them to dance in whatever way they wanted to. Hopefully, through that dance, we can understand who they were; it was like the dance was revealing much more about them than language ever could. It was a way for them to express who they are.

You’ve presented the work in traditional dance theatres and fine art settings. Should we think of it as a theatrical production, performance art, or something else? This is a theatrical production. In dOCUMENTA, I asked the curator, Carolyn Chistov Bakargiev, to find me a theater. She uncovered an old cinema from the 50's; a delicious, Italianate theatre, decorated in red and gold. It was perfect. I do not like working in a white cube. I know that the context of the theatre is much more powerful for the audience, as the spectator can escape to the social setting, and be isolated and silent in the darkness. Usually we believe that the spectator in a museum is freer, as he or she can move around, but for me the opposite is true: I cannot escape the social rules in the gallery space; I am always visible by others, I need to behave. In the darkness of the theatre, however, I can cry, I can sleep, I can dream, I can forget about myself, etc.

You have been touring this production since 2012. Do you face particular difficulties taking a disabled theatre company on the road? Not really, though I felt bad during our North American tour, in New York City, as one actress was crying in my arms because she was missing her mother. 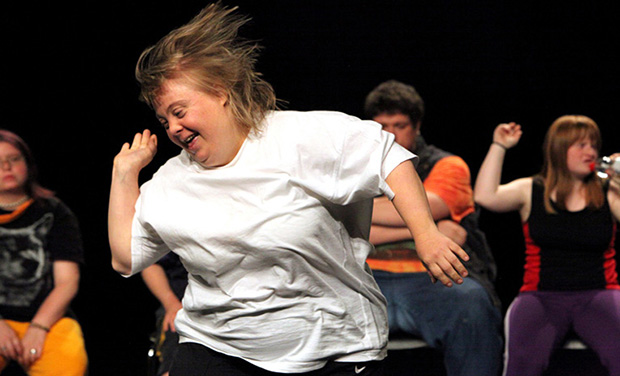 Contemporary dance performances can be quite difficult to grasp for unaccustomed onlookers.  What do you suppose someone unfamiliar with the medium will get from Disabled Theatre? And what would a connoisseur of contemporary dance notice? My work is made for everyone; I work a lot on the reception of the works. The people who don’t understand my work are usually bourgeois, and think they know what contemporary dance is. Less-cultivated people, however, usually have no problem. Disabled Theatre is very simple in its form. This is a kind of documentary about my encounter with the members of the company. Some people have big problem with an issue like "learning disabilities", and they can’t stand the piece; they have to leave - too bad for them. Disability is a big issue, because nobody wants to deal with it. But if you don’t deal with it, it will be always a problem; you have to confront it, you have to look at people like this, you have know them, then you will fear them less. It is always the same question: if you don't know about something or somebody you are afraid. Education, knowledge and culture are helping us to pacify our relation with otherness.

Disabled Theatre runs 14-15 October at the Shaw Theatre, London as part of Frieze London 2014. For greater insight into how this sort of work fits into the contemporary art world, buy a copy of Defining Contemporary Art.