With an increasing shortage of housing, more and more of the world’s citizens are moving to the cities, and with a lack of land for building, architects are busy exploring other ways of living. London-based AT Design Office's ambitious proposal is a floating city off the Chinese coast.

Their 4sq-mile scheme comprises an interlocking grid of different shapes: hexagons, equilateral triangles and rhomboids. The main body is a 150m-long prefabricated block. While some buildings would be above sea level, others would be submerged.

It’s been commissioned by CCCC-FHDI, the Chinese construction firm responsible for the 31-mile bridge which spans the cities of Hong Kong, Macau and Zhuhai.

AT Design’s concept is being billed as eco-friendly, and would have residents getting about in electric cars along underwater tunnels, on-island food productions, and its own power generation and waste-management systems. Open-air gardens are designed for above water, and enclosed green areas for below. 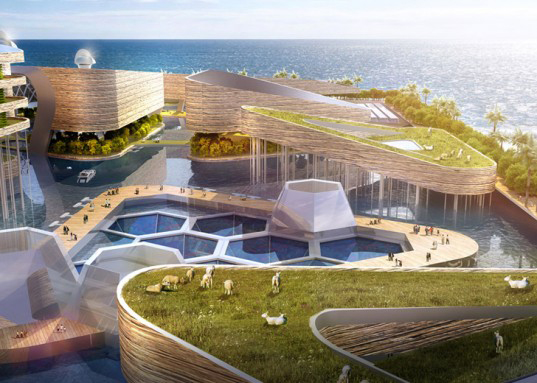 “Environmental impact and the improvements of health and social conditions for human habitat should be the main concerns of new urban design and development,” say the architects.

All in all, it's the sort of innovative project you might find featured in our book Vitamin Green.

However, rather than catering for the social and environmental needs of China’s disadvantaged, the Floating City is designed to accommodate the well-heeled. There are plans for luxury hotels, restaurants, retail, an entertainment area complete with stage, as well as docking facilities for cruise ships. But no plans have been announced for schools, hospitals, libraries or churches. So perhaps the term ‘city’ is stretching things a bit.

According to Slavomir Siska of AT Design Office: “China Transport Investment Co (one of the country’s biggest property investors) is reviewing the proposal and is likely to start to test this ambitious project from a smaller scale next year.”

Fans of green living will be interested in the innovative projects both proposed and built featured in our aforementioned book Vitamin Green. Meanwhile, for a more conceptual but thoroughly achievable look at how a well-planned green future for the planet might look, we highly recommend Jonathon Porritt's ground-breaking, not to mention best selling, The World We Made, which imagines lifeon earth fifty years from now.