Alfredo Jaar tells NYC again, This is Not America

The artist shows his 27-year-old work, A Logo for America, in Times Square once more, starting Friday night

At first glance it looks like an LED update on Magritte’s The Treachery of Images. Then, on reflection, Alfredo Jaar’s 45-second animation, created for Times Square’s animated display screens, might be making a point about semantics. After all, America, as the Chilean artist contends, doesn’t just mean the USA, but also the rest of the continent too.

And, when it comes to definitions, few are more contentious. As the artist recalled in a 2009 interview with The Brooklyn Rail, many spectators were outraged when this work screened in Times Square, back in 1987. 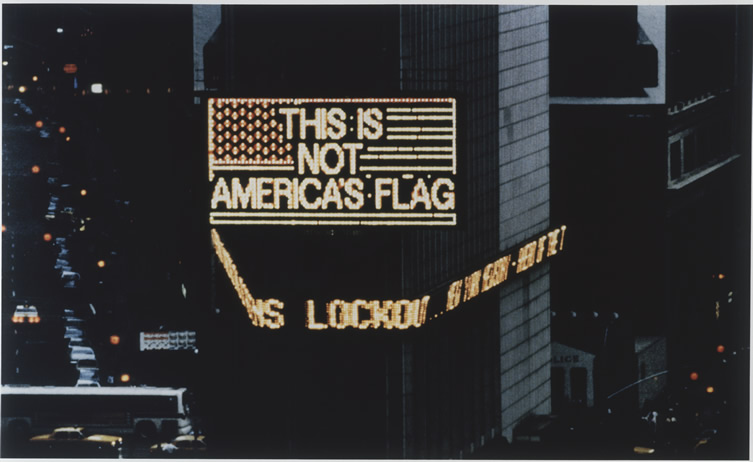 “It is so embedded in their education that the U.S. is America, whereas the rest of the continent is erased,” he explained. “I think it is important to remember language, again, is an expression of reality, and language will change only when the reality changes. In this case the geopolitical reality is that this country dominates the entire hemisphere. If that doesn’t change, then language will never change.”

We’ll see whether perceptions have altered over the intervening decades, as A Logo for America is about to hit the screen in Times Square once again. Presented by the Times Square Advertising Coalition and Times Square Arts, in collaboration with the Guggenheim Museum, the animation will be shown on more than five blocks of signs in Times Square as part of the ongoing arts programme, Midnight Moment. It will premiere tomorrow night, 1 August, and play every night throughout the month from 11:57 pm to midnight.

Given this late-night slot, A Logo for America is unlikely to enflame quite so many spectators; back in 1987 the sequence played every six seconds for a month on the square’s Spectacolor display board. Nevertheless, it remains a vivid reminder of geographical place and limits, in a spot usually so assured of its position on the globe. For greater insight into Afredo Jaar’s place within today’s art world, take a look at Defining Contemporary Art in which Okwui Enwezor, curator of the 2015 Venice Biennale writes so very eloquently about Jaar’s work.