There can't be many artists who can entertain visitors to New York's Metropolitan Museum of Art by the day, and audience members at the city's Metropolitan Opera by night. Yet William Kentridge is supremely qualified in this respect.

The 58-year-old South African began his career as an actor and went on to work as a theatre director in Johannesburg, before developing all manner of unusual artistic styles, including a painterly style of filmmaking that combines stop-motion animation with continual redrawing and erasure, bringing a canvas to life.

This month, a wide array of Kentridge's work will be on show in New York, with three separate engagements across the city. The Metropolitan Museum of Art is currently exhibiting its collection of William Kentridge works in gallery 419. Called In Praise of Shadows, this consists of pieces acquired by both the Met's Drawing and Prints department and its Modern and Contemporary Art department over the past 12 years, and serves as a good grounding in the artist's oeuvre.

Meanwhile, New York’s Marian Goodman Gallery will open its new Kentridge exhibition tomorrow. Entitled Second-hand Reading, it is an exhibition of films, drawings, sculpture, and prints, which Kentridge says is about “taking sense and deconstructing it, taking nonsense and seeing if sense can be constructed from it …. This leads to the question of mistranslation, and the pressure that imperfect understanding gives to the act of imagination.” 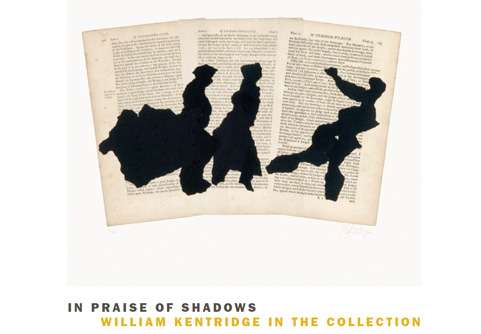 This might sound like an overly highbrow way to describe one's exhibition, yet it certainly encourages visitors to look beyond Kentridge's homeland for a key to his work; Kentridge's father was a prominent lawyer in South Africa's anti-apartheid movement, and perhaps too many viewers bear this in mind when approaching his work. Indeed, this new series of works at Marian Goodman consists of diverse pieces, from a flip book inspired by Shakespeare's Sonnet no 18 ['Shall I compare thee to a summer's day'], through to a series of bronze sculptures which form two distinct images when turned to a certain angle, and a set of silkscreens adorned with phrases from Kentridge's lecture series, Six Drawings Lessons, which he delivered at Harvard last spring.

Meanwhile, if that weren't variety enough, at the Metropolitan Opera from September 28, Kentridge will also produce his own version of  Shostakovich’s 1928 opera, The Nose. Kentridge first oversaw The Nose – a bizarre story about a 19th century St Petersburg bureaucrat's search for his missing nose – in 2010, to great acclaim. Find out more about opera here, The Met exhibition here, and the Marian Goodman show here. And for a greater understanding of Kentridge's life and work, do consider our great monograph, which includes Kentrige's paintings, writings and lectures as well as well as a contribution from his fellow countryman, J. M. Coetzee.