'I remember the hostility of the Reagan years - pragmatism, resources and mercy were needed then, and now'

Jenny Holzer is no stranger to statement art. Words, specifically the considered choice and use of them, have long been her forté. The artist made a name for herself applying ‘Inflammatory Essays’ to posters around New York in the late 1970s, and then, more famously, as aphoristic ‘Truisms’ on plaques, electronic signs, stone benches, condom packets, et al throughout the ’80s.

She came to popular attention in 1982 when she displayed her ‘Truisms’ on a Times Square billboard, informing those below that ‘Abuse of power comes as no surprise’. To say the phrase caught on is somewhat of an understatment. But 1982 was also the year when AIDS revealed itself in all its horror and when its attendant news stories began to prey on public fears. Holzer worried at one point that she too could have contracted the illness. 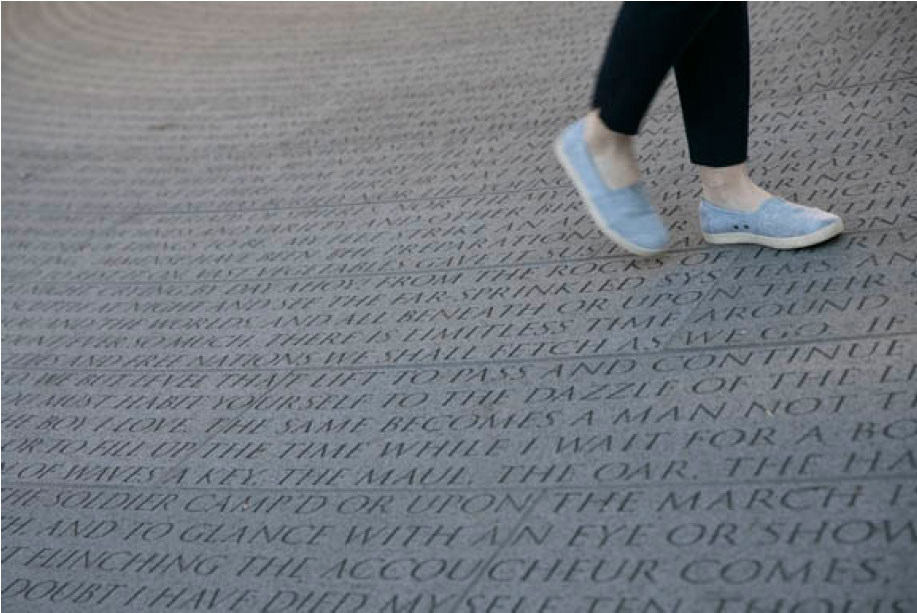 We caught up with her this week - almost a year on from the unveiling of her AIDS memorial, a Walt Whitman poem, housed beneath a sharply angled pavilion in Greenwich Village, designed by architects Studio AI.

For non-New Yorkers a little background might prove helpful. The memorial sits in the shadow of a sleek white building that once housed part of St. Vincent’s community hospital - often referred to as the “ground zero” of the city’s AIDS epidemic. However, the neighbourhood today is a far cry from the downtown Manhattan of the ’80s. Luxury condos and an upmarket emergency room occupy the hospital site, trendy restaurants abound.

Holzer has engraved the granite paving stones at the foot of the memorial with excerpts from Whitman’s 1855 poem Song of Myself. The artist stopped using her own writings more than a decade ago, “wandering around in various thickets” instead, she says, to find others’ words to use for her work. Whitman, who is thought to have been gay, is a fitting choice for the memorial given the severity of the AIDS epidemic in New York’s LGBT community.

In between opening shows of new work around the world, Holzer has, in recent months, been working with Google and other partners to develop an app that will augment the piece (her first permanent installation in New York City). More on that soon. 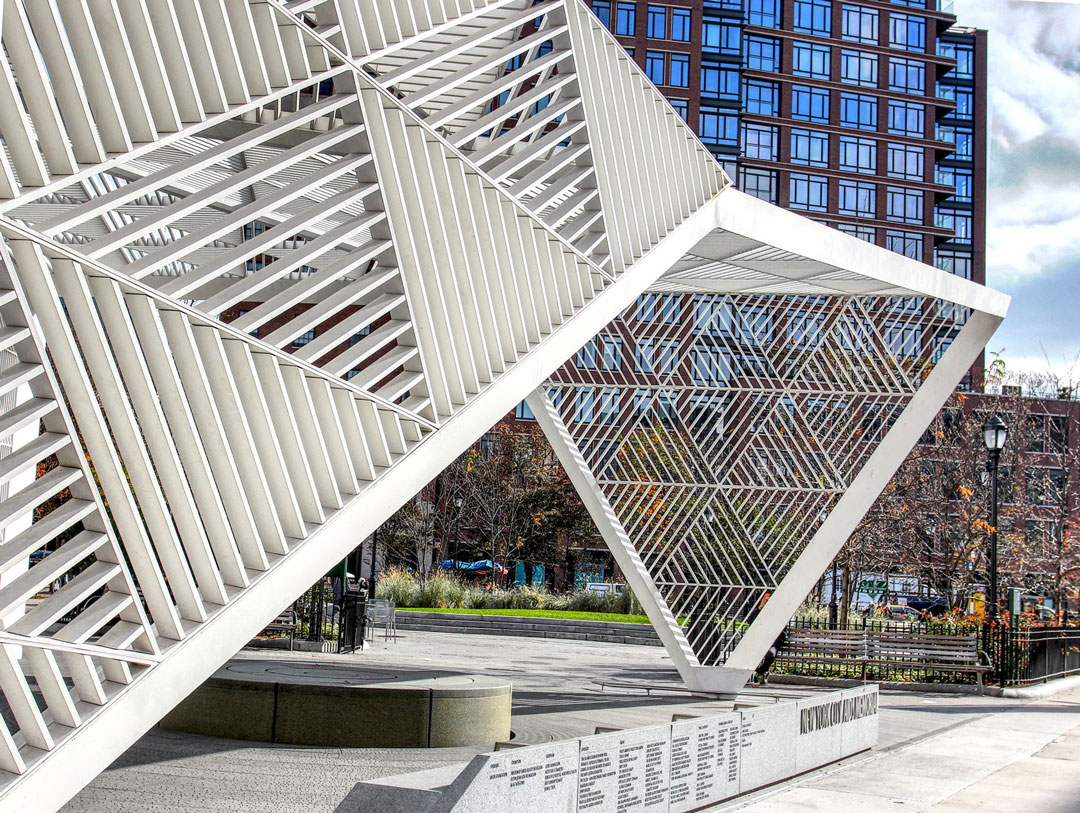 While she is no stranger to dealing with the shadow of death in her work - her Laments (as we outline in our Contemporary Artist Series book) "were shown at the Dia Art Foundation on thirteen stone sarcophagi, and in thirteen vertical synchronized LED signs," - Whitman's poem is full of life.

Published in 1855, his celebration of the power and potential of the individual is an inspired choice and Holzer’s selection from it includes many of the poem’s most evocative passages. The poem is concerned with the body (“Mine is no callous shell,” Whitman writes), the lure of sex (“Always the procreant urge of the world”), and the underlying belief that we are not united by death but by "the common air that bathes the globe". It's an apposite choice in an age when art and artists are beginning again to challenge the status quo.  Here's Jenny.

Do you get a sense as an artist that the culture wars are returning and if so, how are they manifested differently today? Culture wars are back with a vengeance, fueled by political expediency. Trump and associates stoke differences and create new rifts. I hoped much was settled in principle if not always in practice, such as that assaulting women is a no go, however traditional; that preserving and improving the environment is self-interested in the best way; that straight white men are not magically better than everyone else, and that adequate health care for all is beneficial for the country as a whole.

When you’re creating a memorial such as this one, is there any element of the victorious about it - we managed to beat something terrible? The illness isn't beaten although treatment options are so much better. The disease persists as a threat to many, especially the most vulnerable. However there is great joy in that much shame is gone and openness is relatively possible. I remember the grotesque hostility and denial of the Reagan years, and their climate's passing is a victory and cause for celebration. Pragmatism, research, resources and mercy were required then, and are now. 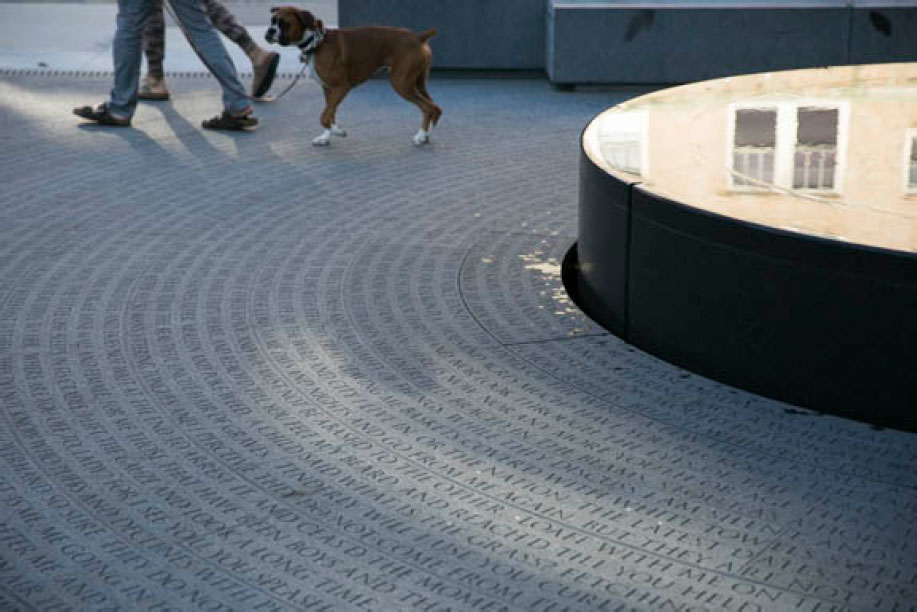 How did the setting near St Vincent’s affect what you wanted to do? Presumably, geography played an important part.  Siting the memorial near St. Vincent's was inspired and is poignant. So many people were hospitalized and visited there, and died there, that it's right for the memorial to be close by. The location in the Village, often a place of great LGBT happiness and sometimes protest makes the site right, too. We hope to realize a mobile memorial as well, an app that would permit users to project memories, related poetry and prose on any surface via their phones. The concept of a mobile memorial is very interesting.

Big obvious question: the Walt Whitman poem is a beautiful one with many possible readings, what made you choose it?  'Song' has love, and lovely words overflowing, and represents ardent unashamed people abounding, people of all sorts, and that is how and what the memorial must be. My friend, the poet Henri Cole, made the welcome suggestion of 'Song of Myself'. Another friend, Nick Morgan, and I cut the poem slightly to fit the site, the times and the purpose.

Finally, can you share one personal memory from the time? Various friends, associates and I waited to learn if we would die. Some died, and the rest of us were changed and do not forget.

A close up of Walt Whitman's Song Of Myself as used in Jenny Holzer's AIDS Memorial - photo by John Moore, Circular Space Photography

Check back later in the week for an interview with Kobi Benezri,  designer of this AIDS memorial available at Artspace. Take a look at our Jenny Holzer Contemporary Artist series monograph and, most importantly, if you take away one piece of information from this story make it the following:

One in five people who are HIV + do not know their status. Almost 4,000 New Yorkers will be infected with HIV this year. New York leads the nation in the number of new HIV cases. 34 million people are living with HIV/AIDS worldwide. More than 30 million have died from AIDS since the epidemic began. If you want to help you can do so here. Finally, if you're sharing any of this, be sure to use #nycaidsmemorial.