Inside the mind of Edgar Degas

If the word association test were applied to Degas, what might be the results? For a great many people: images of the ballet, of racehorses and of women washing themselves. The more knowledgeable might add: an Impressionist, a wit, a man who went slowly blind. The expert could extend the list further: a superb copyist of the Old Masters, an exquisite draftsman, an exceptionally intelligent artist whose attitude towards Impressionism was equivocal. That’s how the opening paragraph runs for us on one of the most elusive and private of the impressionists and post-impressionists, Edgar Degas.

Now, a new show Degas’ Method at the Ny Carlsberg Glyptotket, in Copenhagen places the paradoxes at the heart of this most fastidious of artists into relief.  It’s been put together by one of the hottest curators of the moment Line Clausen Pedersen who's been working towards the show pretty much for the last 5 years. Her curatorial approach is bold: each gallery has a very different style. One shows just one work along with a film showing how it was made by way of X-ray and infrared technology. Another shows many works privately made in his own studio — the little sculptures and the prints. Another focuses on a key year while another still looks at his influences from the past, showing his works alongside those from his collection of old masters. Each, in its own way, gives a clear insight into his processes. We caught up with Pedersen on the phone as she was preparing the show for its opening.

“I decided on some key themes and built the show around these,” Line told us. “They are, I think, the most obvious threads that run through his work - Degas positioning himself in time, Degas and Process and his Draftsmanship. My approach to art is intuitive, so as a curator I feel that we should present things in a way that they become intuitive to the audience as well." 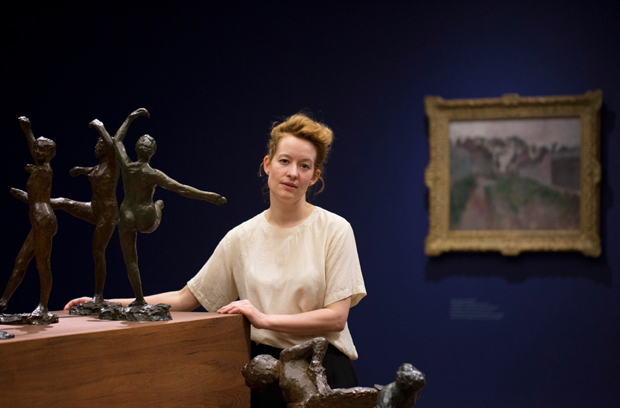 The show particularly excels at communicating the complexity which characterised Degas’s work - was that something you strove for from the beginning?

“Yes. Degas was obsessed by complexity but perfection as well. Those two things in one mind are challenging. There’s a wonderful drawing we have loaned by the British Museum called Dancers At The Bar. It’s a small and delicate work that usually lives in a box in the print room, a painted sketch that particularly demonstrates this complexity within his technique. It’s a piece of paper painted bright green. The two dancers are clearly sketches. What’s interesting is the fact that he takes the liberty to draw while he paints. It’s not really that perfect. You can see where he’s struggling but it’s all about the process, the technique, about the body and the twisting and turning into weird positions.

"In it, he’s interested in showing us the process, the complexity and also the originality. He reinvents as he goes along. We can see that reinvention, not only the sketch versus the finished motif, but also the drawing versus the painting and the line versus the colour. So all these general ideas of what art consists of you can say he challenges quite deliberately. That to me is genius really and he’s one of the first to do it and he’s not shy about it. (Interestingly, it’s one of the few works he signed). He’s incredibly ambitious because he works in an era of impressionism where everybody is preoccupied with inventing and reinventing the new big painting. So clearly he’s been part of that quest. 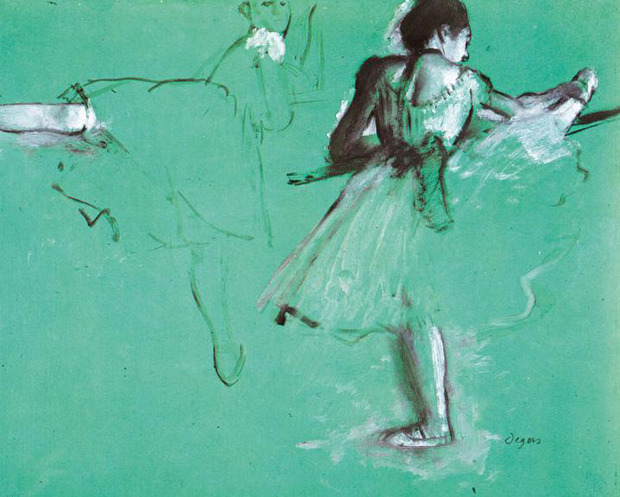 Dancers At The Bar - Edgar Degas

But didn’t he rebel against the 'shock element' of the impressionists? “Well he was a clever man because he worked in the environment but instead of fighting it from outside like say Manet did. Degas fought them from within which is incredibly clever. So he exhibits with them and he’s one of the characters who gets things going – he arranges the first impressionist show – but mentally, all the time, he’s distancing himself.”

Was that an artistic statement or just an element of his character? We’ll it’s true, he was very reserved. I think it’s first and foremost an artistic approach because painting to Degas was so important and he was quite keen on the art form being an art form in itself. He didn’t think it should be written about and discussed by people who only knew about say literature. But it suits his personality. He’s like this loner doing his thing. He likes this perception of himself as maybe a bit of a reserved or grumpy character. Yes, he was difficult but he wasn’t any more difficult than most artists. If you have a project and you’re ambitious about it you want to insist and, if you disagree, people tend to think it’s something personal. But actually you can see in his notebooks and letters that he has very dear, close at heart, friends throughout his life. 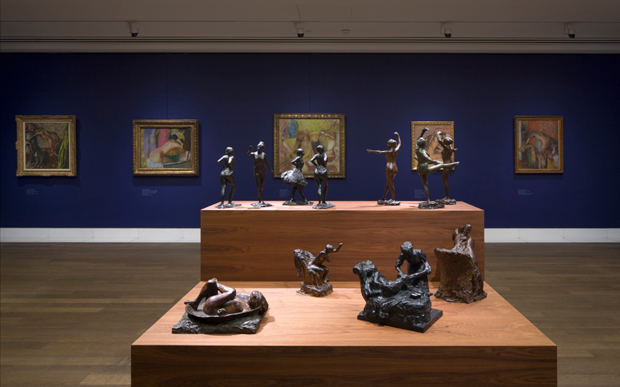 __What did you discover in your research that surprised you the most? __ I knew that there was this cross fertility across works and techniques and motifs and that he continuously worked with the same challenges throughout his career. But it was more fundamental than I thought it would be. It confirmed everything I thought but I discovered that he was way more radical and ambitious than I thought. Which explains why the rest of the Degas literature is concerned with categories such as dancers, horses, oil paintings, pastels etc. I see now why: because it is a huge thing to take on, trying to unite these pieces. The only reason I can do this now is because everyone else has done such a brilliant job describing these categories before me!

Do you think he was aware of a defining method that applied to all his output? Well yes and no, that’s a tricky question because I think he was aware of everything he did and I think he consciously worked towards reinventing or rather evolving some very fundamental things in art. For instance: Line composition, colour, the space on the flat surface and things like that. But meanwhile, having looked again at his printmaking and a lot of his sketches you can tell that he does take advantage of coincidence. When he does prints he’s doing it because he needs to be shaken up a bit and to see what comes out of it. And he uses these abstract shapes (that are uncontrollable because it’s ink and it gets all over the place) afterwards to reinvent some of the old shapes. So I think he depends on chance as well. Meanwhile, his overall approach is quite conscious, which is him trying to place himself in the line of old masters. 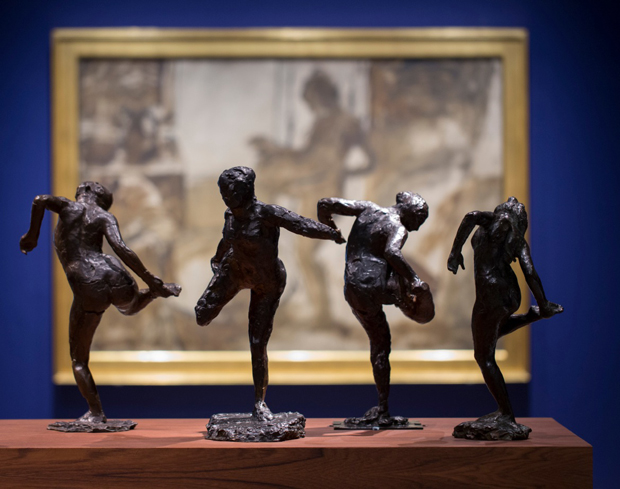 He collected and surrounded himself with their work didn’t he - what sort of effect do you think this had on him?  Well, I think it had a huge effect. He didn’t go out and meet people, he didn’t have students. He didn’t really have a teacher, though he went to school briefly. So, in a way, these artists became his colleagues. Yes, it’s interesting that he always quoted these old masters. He’s always talking about drawing and art as something that has a long tradition at a time when everyone else was so caught up with reinventing and getting rid of tradition. You have artists who, in their formative years, go to the Louvre to copy masters and to improve. But Degas did that all his life. He kept copying old masters. He obviously loved them but he was also acknowledging that he needed them and that they had done huge things before him. Being grounded in draftsmanship and being grounded in classical art in general he manages to create a certain art that is beyond his own art in time which is why it’s still interesting to us now. It’s quite fundamental to us what he’s doing.

Finally, what’s the one thing you would have asked him were you able to? I would have loved just to have walked the galleries and asked him questions. I would really liked to have discussed with him what he felt when he reworked the paintings, when he went back and forth and just changed things. I would have loved him to have gone through a painting with me and to tell me where were the challenges, and why did he do what he did. Why did he move a pillar, why is a woman's leg so spaghetti like? When does it become about something else? There are dancers and horses and women doing their hair – whatever – but what is it really about? He went back and forth and must have gone crazy getting it right. Why did he not give up? He didn’t work with 'finished' or 'unfinished' – it didn’t seem to interest him. He was so much more interested in the process, and just amusing himself - or struggling - with that.

Check out Degas Method at Ny Carlsberg Glyptotket and delve into our wonderful colour library books on The Impressionists and Degas himself.