Shukhov Tower in Moscow, the inspiration for the Gherkin, could be lost if Putin refuses to fund restoration

One of the most revealing chapters in one of our favourite books at the moment, Jean-Louis Cohen’s The Future of Architecture. Since 1889. is the one on architecture and revolution in Russia. As Jean-Louis points out in his introduction to the chapter, during the 15 years between the 1917 Bolshevik Revolution and Stalin’s 1932 campaign to consolidate artistic and intellectual organisations under strict party rule, Russia was a laboratory for an astonishing range of urban and architectural invention.

With that thought ringing in our heads we were saddened to hear that one of the constructivist masterpieces of that period, Vladimir Shukov’s radio tower in Moscow, is in danger of being lost forever. The lattice-like structure was commissioned by Lenin between 1920 and 1922 and was, for many years, the recognised emblem of Soviet television. The tower, is a masterpiece of the Russian Avant Garde and has influenced many contemporary architects including Sir Norman Foster, who called it “a structure of dazzling brilliance” and cited it as the main inspiration for 30 St Mary Axe, (the Gherkin). 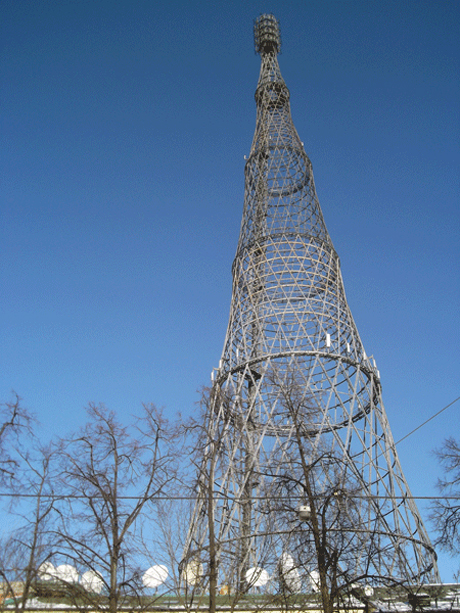 However, the tower has been allowed to fall into disrepair and last week, Shukov’s grandson, (also called Vladimir) called for it to demolished rather than shame the name of his ancestor.  “If the tower is not put into order, or if real work on it on a professional, international basis is not begun by 2013 (the 160th anniversary of Shukov’s birth) it would be simpler that it be demolished so that it shames neither my ancestors now my country,” he said in a speech designed to shame President Putin.

Last year the then prime minister allocated around $4 million to reconstruct the tower. Shukov argues that this sum will merely result in a modern replica being created. He’s arguing for a full restoration. International architects have pledged to restore the tower for a nominal fee and the EU has even agreed to stump up money for Shukov’s plan. So far, the government is resisting which throws up an interesting question: should political concerns over budgets take secondary importance when world class architects are willing to waive their fee in order to save a building they feel has contributed to the excellence of world architecture. What do you think?