St Pancras International is the UK terminus for the Eurostar, and links Paris, the 19th century capital of the art world, with London, an equally important hub in today's market. So it's fitting that the station's current owners, HS1, have taken it upon themselves to host some contemporary works within their walls.

Their initiative, The Terrace Wires, commissions and displays site-specific pieces for a space high above the station's Grand Terrace, where the Olympic Rings hung throughout the 2012 London Games.

Now, a dedicated panel, including Phaidon ceramicist Edmund de Waal; Richard Cook, editorial director at Wallpaper Magazine; and BBC journalist Evan Davies, has just chosen the first work to be hung in the station. It's by the English and Argentinean couple Lucy and Jorge Orta, who divide their time between Paris and London. 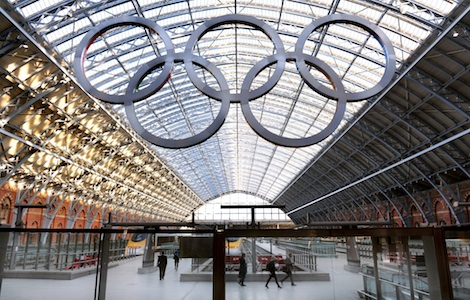 The space where The Terrace Wires commission will be placed

Lucy explained to the The Art Newspaper that the work will be a continuation of their Cloud series, in which the pair fashion clouds from discarded water bottles to examine how mankind shares the world's resources. She admits she finds the large-scale public commission intimidating, and that they're keen to temper their work in order to reach a general audience.

"We are trying to make the work as poetic as possible but without it being too esoteric" she tells the paper. "Hopefully the public will be able to get the message. It's up to us now artistically and aesthetically to get that balance right which is a challenge." You can judge for yourselves, when the work is unveiled in the station next April. If you like it, take a look at our Lucy Orta monograph in the store.