"Architecture does not exist independently. It developed under the influence of such things as local climate and other environmental conditions. And architects have always traveled," wrote the Japanese photographer, publisher and architecture critic Yukio Futagawa. "Modern masters, such as Frank Lloyd Wright, Le Corbusier, Alvar Aalto, and Louis Khan have all written great travelogues."

This is an interesting way to view building design, which is fundamentally static in nature, but also something that is viewed by travellers in a way that natives may never notice.

Futagawa, the director of Japan's Global Architecture magazine, was well grounded in his own nation, but also fascinated by buildings many thousands of miles away from his Tokyo office. He compiled a 10-volume collection on Japanese traditional houses, and a 12-volume Frank Lloyd Wright collection. 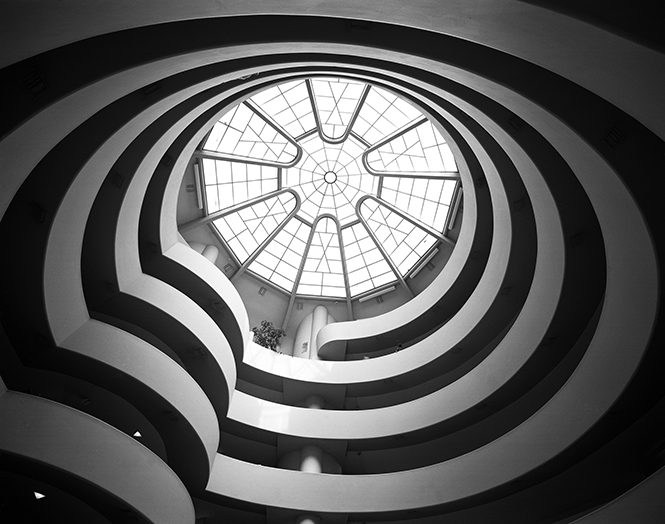 This latest exhibition, at the Taka Ishii Gallery, in the Roppongi district of the Japanese capital, focuses on Futagawa's Frank Lloyd Wright pictures - 20 images, revealing the buildings' beauty in simple black and white shots.

"By traveling, I learn not only about architecture, but also various cuisines and clothing," said Futagawa back in 2009. "I travel to experience the various cultures of plains, mountains, and cities. I shall turn 77 this year, but have no plans to alter my travel schedule, as I want to continue studying and discerning architecture."

Futagawa died in March of last year, but his revealing insights live on, not least in this new show which runs from 15 February - 15 March. For more on it go here.

For a greater understanding of Frank Lloyd Wright's work, pick up a copy of our definitive monograph by Robert McCarter ; for other examples of architectural photography at its absolute best, consider our Hélène Binet book, Composing Space, and finally for further insight into architectural developments across the world, download our Phaidon Architecture Travel Guide App before you leave home today.