Why does Zach Lieberman's piano play the radio?

Zach Lieberman is an artist, hacker and researcher whose work is dedicated to exploring new modes and expressions of play. In the past he's made an eye-tracking device for a paralysed graffiti artist and software to turn runners' workouts into visual artwork.

The final room in the Barbican’s Curve Gallery exhibition, Digital Revolution, holds his latest commission from Google. The search provider’s DevArt initiative is a celebration of art made with code, and it's here, among these keyboards, 3D printers and interactive screens, that Lieberman has installed his 'international radio-station piano' Play The World.

The piece consists of a standard 88-note keyboard set within a circle of rod-mounted speakers. When a player presses a note on the keyboard, Zach’s software immediately locates a radio station broadcasting that note, somewhere in the world, and streams the signal from the station. The station’s geographic location is displayed on an LED readout below the speaker emitting its broadcast. It might sound complicated, yet it’s remarkably engaging once you get down to bashing the keys.

At the opening Zach took a little time to describe the inspiration behind it, tell us a little bit about the artists he admires and explain why he thinks online radio is a bit like the Internet in the 1990s. 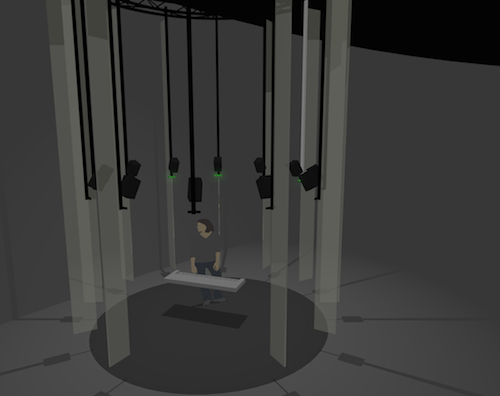 An early rendering of Play The World

W hat’s your background?  I trained as a fine artist, but I wound up working with computers and technology, almost by accident. Today, I tend to do performances and installations that are really about making invisible things visible.

What inspired you to make this? New York taxis. You’d jump into a taxi and the radio is playing and you never hear a station you’re familiar with. More often, it’s some really interesting sounds. For me Internet radio reminds me of the Internet in the 90s. It feels like a very democratic medium. Almost all of the stations feeding in here are traditional radio stations from around the world, that also stream their broadcasts live. So, it could be a radio station in Kenya and India. Most small radio stations are doing this as a matter of course. It’s amazing when you start to hear beautiful, weird sounds. I wanted to share that.

Which artists do you admire? I love artists that take ordinary things and allow you to see them in new ways. For this project, artists like Janet Cardiff and George Bures Miller inspired me. They did a piece called The Forty Part Motet. It involved placing forty speakers in a room, and feeding a voice from forty individual singers to each of the speakers. So you could go in close and hear each singer individually, or just take in the choir; I saw it as a reminder of the power of individualism. I like that kind of stuff.

How about works in this exhibtion. What are your must-sees? Well, I really like James, George and Jonathan Minard’s piece, Clouds.  They’ve made this 3D camera, combining a Canon 5D with Microsoft’s Kinect motion sensor, to produce something called the RGBD toolkit, that stands for red, green, blue and depth. I love the Chris Milk piece too, The Treachery of Sanctuary. And Yuri Suzuki is a hero of mine. He came by while I was setting up and was pounding the keyboard. If I make something he likes, then I’m happy.

Find our more about Zach’s work here. There’s an in-depth explanation of how he put everything together for Play The World here. You can also read our Yuri Suzuki interview from a few days ago here. For more on DevARt go here; for more on Digital Revolution more generally it’s here. And for a richer understanding in the artistic possibilities afforded by technology, buy our book Art and Electronic Media.