Will the Watts Towers tumble?

The Watts Towers in Los Angeles are among America's best-loved works of outsider art. Built by Italian immigrant Simon Rodia between 1921 and 1954 from steel and concrete in his own back yard, this collection of Gaudi-esque follies - three huge towers, six shorter ones, and a series of pathways, podiums and arches, remain a charming testament to the unending creative human impulse. As John Maizels puts it in Raw Creation, our study of outsider art, Rodia offered no greater explanation for his creation beyond the simple admission: “I had a mind to do something big, and I did”. 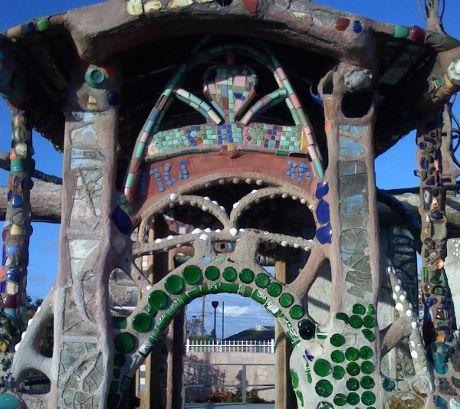 However, as Maizels also notes, The Towers' initial condemnation in 1958 served as a catalyst for US engagement in outsider art. While the city authorities felt The Towers were unsafe, and therefore worthy of demolition, a group of concerned local citizens rallied in response; Rodia's work was proved suitably sturdy, the site passed into private hands and The Towers were seemingly saved for posterity. Indeed, The Watts Towers were designated a National Historic Landmark in 1990.

Yet, The Los Angeles Times reports this week that UCLA engineers are currently undertaking a study of The Towers to determine their stability. The paper quotes UCLA's Professor Ertugrul Taciroglu as being particularly concerned by a series of serious cracks at the base of The Towers. Dedicated sensors have been fitted to the buildings, to measure both the weathering effects of wind and sun, but also the damage done by California's seismic activity. Taciroglu aims to ascertain just how much wear and tear the structures can take. Though The Watts Towers are well-respected in art and architecture circles, they attract precious few visitors.

We certainly hope that the UCLA study, which should be completed early next year, will conclude that The Towers can be restored and preserved. After all, the centenary of their foundation is only eight years away. To learn more about how The Towers came to be, see this short (12 minutes) documentary, above; and for more on other great works made outside the gallery system, take a look at our fascinating book, Raw Creation.