An appreciation of the Scottish painter and sculptor, friend of Mark Rothko and "radical modernist"

The Scottish-born, London-based painter and sculptor William Turnbull died last Thursday, at the age of 90. Though he began as a commercial illustrator and painter, working for a time for the Scottish publishers DC Thompson, he is best known for his primitivist metal sculptures, which reside in numerous public collections, including The Tate's, The Scottish National Gallery of Modern Art, and The National Gallery of Art in Washing D.C.

As The Guardian's obituary points out, Turnbull's father's career as a shipyard engineer may have influenced William's desire to construct such hulking works. However, his father's unemployment, brought about by The Great Depression, pushed Turnbull Jr out of higher education and into employment, first as a labourer, than as a commercial illustrator.

Joining the RAF in 1941, he served as a pilot during World War II, before enrolling at The Slade in 1946. Though he left the school without graduating, he did acquire a love of sculpture, a life-long friendship with fellow Scots sculptor and undergraduate Eduardo Paolozzi, as well an equally enduring mistrust of the establishment orthodoxy. 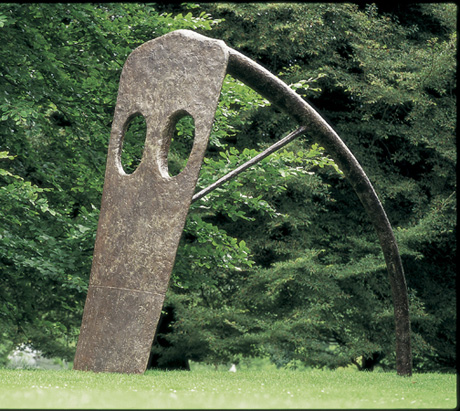 His work was included in both the British Sculpture exhibition at the 1952 Venice Biennale and in the groundbreaking 1956 group exhibition, This Is Tomorrow, at The Whitechapel Art Gallery, London.

In 1957 he traveled to New York, and met with Mark Rothko, whose colour-field style influenced Turnbull's own paintings. While he lived through a turbulent, changeable period in contemporary European art, Tunbull's work remained remarkable consistent. Fellow sculptor Antony Gormley described the artist in the recent biographical documentary, Beyond Time, as a "radical modernist, who recognizes that sculpture of its nature is archaic."

Directed by his son, the filmmaker and musician Alex Turnbull (23 Skidoo), this film, completed in 2011, was never intended to be as an obituary, though it does nicely sum up this singular artist's work and vision. Those hankering after a real world retrospective should head to Chatsworth House in Derbyshire next year, when the stately home will be hosting a Turnbull exhibition 10 March - 30 June, and those interested in the wider trends in contemporary sculpture should take a look at Vitamin 3-D, an up-to-the-minute survey of contemporary sculpture and installation featuring 117 artists.