Keith Haring might have emerged from the vibrant dance-club and street-art scene of 1980s New York, yet he went on to become a fine artist, fit for gallery and museum walls. As Catherine Lord and Richard Meyer explain in Art & Queer Culture, Haring’s paintings were teeming with a wild menagerie of “thickly outlined and energy-emanating figures enacting scenes of birth, love and sex.”

Some, such as his radiant baby motif, seemed to sum up the joy and optimism of Eighties New York. Yet others express a darker outlook. Haring’s negativity is perhaps best expressed in a work regarded as his final great painting, The Last Rainforest, which is being offered up for auction at Sotheby’s in London tomorrow, 28 June.

The painting currently belongs to the acclaimed photographer David LaChapelle, who, after decades working at the top of the fashion industry, relocated to a Hawaiian island in 2006. “I live in the rainforest in East Maui,” he explained to the auction house.  “My home is an open space – there’s no glass, it’s all screen. So the painting is sitting in a dark living room most of the time, which is not the place for a masterpiece.”

Haring created the painting shortly before his death at the age of 31 on 16 February 1990. Here’s how the auction house describes the work’s genesis.

“After Haring was diagnosed with AIDS he asked Shafrazi, his long term gallerist, to get him 100 canvases. The nature of the grandiose parting project that he had planned is lost to history as only three were completed before he passed away: Brazil,Walking in the Rain, and most significantly, the present work. Of this trio, The Last Rainforest is by far the most engaging; so teeming is it with action and complex tessellation that it is almost overwhelming to the eye.” 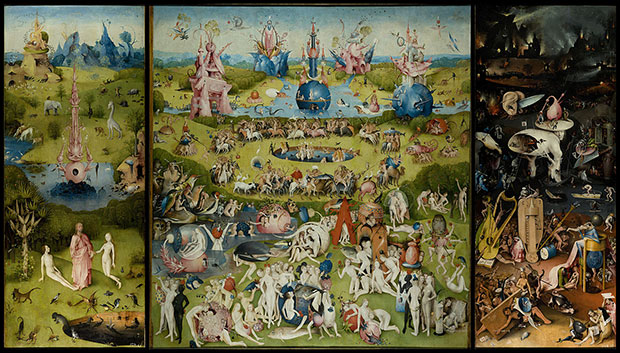 This 182 by 243 cm canvas, was executed in 1989, and draws together themes of nuclear war, environmental collapse, the AIDS crisis - Haring was diagnosed with the disease in 1988 - and deathly barbarism into a masterfully hellish composition that the auction house likens to both Warhol and Pollock, as well as earlier artists such as Hieronymus Bosch.

Yet the work’s provenance adds an additional gloss to the work, since David LaChapelle was both a friend of Haring and Warhol. 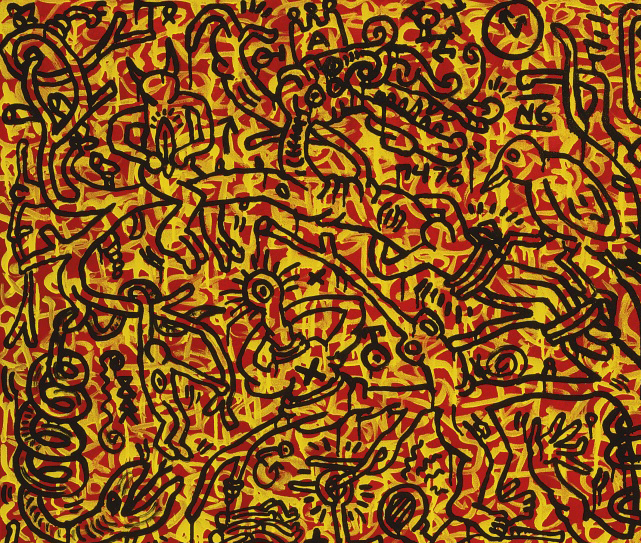 Detail from The Last Rainforest (1989) by Keith Haring. Image courtesy of Sotheby's

LaChapelle tells the auction house that he was on fairly good terms with Haring, hung out with the artist, and fell in love with this painting more or less at first sight. “I thought it was prophetic,” he says. “I love the layers, and the density of it. I love the mystery of it. It was very much about the horrors of the world, but there is a definite prevailing optimism within the horror.”

While LaChapelle also likens the horror in the painting with Hieronymus Bosch’s Garden of Earthly Delights, he believes the painting is actually an optimistic work, as, Haring’s baby character- well hidden within this work, appears to be at peace.

“When you find the baby – which I think is the key to the whole painting – you realise that it’s sitting in the Lotus position,” says LaChapelle, “protected within the womb-like hollow of the tree, with rays coming out of his head. Here, it’s almost like he’s ended his journey. In Keith’s earlier paintings, at first, he was always crawling. Now, it is like the baby has reached his destination and is enlightened. So there is optimism within all of that horror.” 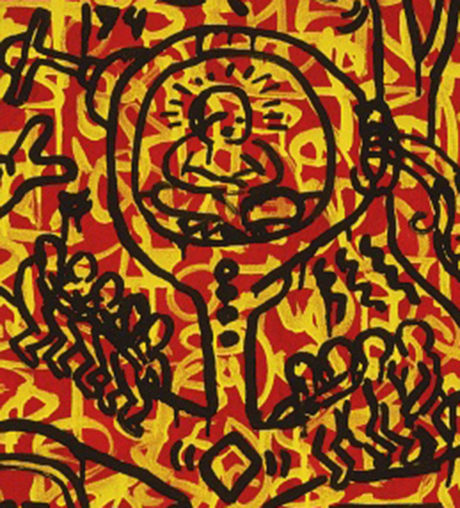 The radiant baby, as identified by David LaChapelle in Keith Haring's The Last Rainforest (1989). Image courtesy of Sotheby's

For greater insight into Keith Haring get Art & Queer Culture; for more on David LaChapelle get The Fashion Book; for more on Bosch get this book; and for greater advice about the auction world get Collecting Art for Love Money and More.