Could Philip Johnson's World's Fair relic be the next piece of NY architecture to undergo a radical reinvention?

Philip Johnson’s New York State Pavilion was built in the borough of Queens for the 1964 World’s Fair, which brought around 50 million visitors to Flushing Meadows-Corona Park.

Johnson’s Modernist concrete and steel monument housed a theatre, a trio of observation towers, and a 100-ft high, open-air elliptical ring. It was known as the "tent of tomorrow" and had the biggest suspension roof – made up of coloured fibreglass panels - in the world. 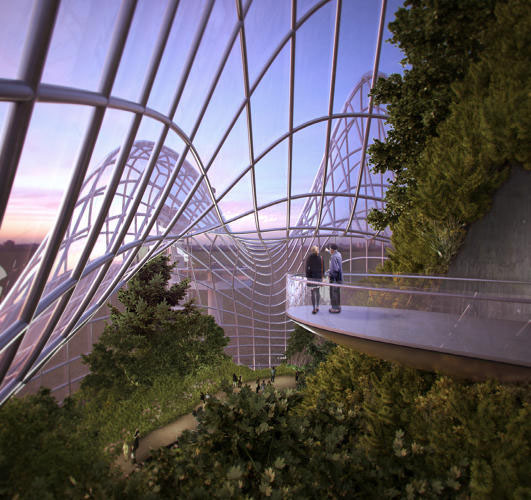 While other structures built for that World’s Fair have been demolished, relocated or adapted, Johnson has remained in place. However, it is in a bad state of repair, particularly when it comes to that unprecedented roof. According to the National Trust for Historic Preservation “it would cost approximately $14m to demolish the pavilion, $40m to fully repair and preserve it, and up to $72m to reopen it to accommodate a program of full reuse.”

In response, the trust put a call out for ideas to breathe new life into the pavilion. The winning design is the Hanging Meadows, suggests using the existing structure acting as a base from which a futuristic-looking glasshouse is suspended. As well as cultivating forest of plants native to the New York region, the space would hold a planetarium and classrooms. 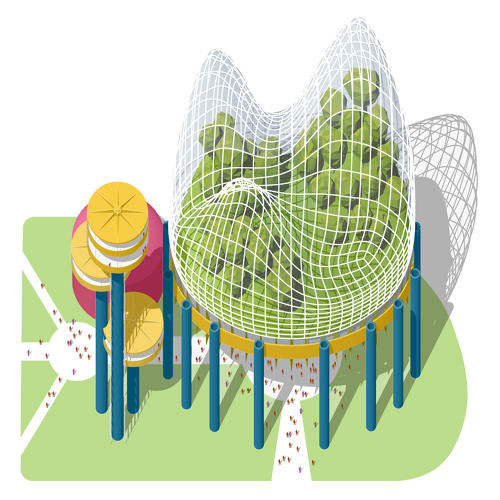 The Hanging Meadows were conceived by Aidan Doyle and Sarah Wan, a young pair who worked together at Safdie Architects in Boston and now operate out of Seattle. They are also winners of the Baltic Way Memorial Competition in Riga, Latvia. The duo beat around 250 other entrants in this latest context. While the designs are unlikely to be realized – since competition was primarily designed to drum up enthusiasm for pavilion – it does offer a tantalizing glimpse into the kind of new life that can be breathed into old relics.

For more on another marvellously reimagined relic that did break ground buy our High Line book; meanwhile, for more on Johnson and co. get our monograph on his great mentor Mies van der Rohe.