Christian Marclay's 24-hour video work The Clock (2010) - one of the best-known artworks of the last two years - relies on a simple conceit. Thousands of pieces of footage featuring clock-face images from bygone movies are assembled into a 24-hour film collage, wherein each clock shot matches the real time at which the video work is being shown.

Taking a similarly simple premise, Manchester artists and photographers Mishka Henner and David Oates watched over 100 films to find sequences in which a photographer steps in front of the camera lens. Their 10-minute film collage Photographers, is a mesmerising tribute to cinema's greatest fictional cameramen and women.

"After many days and nights of failed attempts we finally came up with sequences that worked," Henner says. "You need stamina to make work like this and there were times when we didn't think we had it."

It's a compelling  watch, even for those less inclined to video works, since the juxtapositions throw up unusual moments of drama. "You've got to get close Rich, to get the truth, you get too close you die," says John Savage's character John Cassady in Salvador, to which Kevyn Major Howard's character in Stanley Kubrick's Full Metal Jacket says "Well at least they die for a good cause". 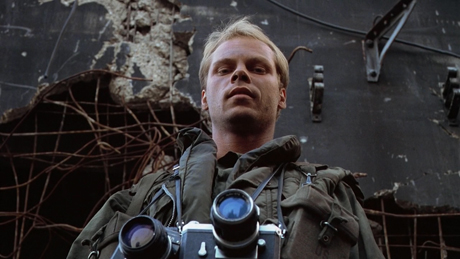 Oddly, the war photographers seem more sanguine than their fashion-world counterparts. "Just beautiful, I'm very happy just now," says Keith Carradine in Pretty Baby (1978) after a frustrating day behind the camera. "No no no, start again, re-think it, re-think it." David Hemmings exclaims as Thomas, the sixties mod London photographer in Antonioni's Blow up (1966).

Classic scenes from films such as Salvador (1986), Full Metal Jacket (1987), Blow-Up (1966) and Fred Astaire as a fashion photographer in Funny Face (1957) are supported by more recent performances, such as model-turned-photographer Helena Christensen's appearance in a Blow Up tribute commissioned by W Hotels in 2010; Julia Roberts as Anna in Closer (2004) and Adrien Brody in Harrison's Flowers (2000).

"Taking the photographer out of their original context and putting them in a frame with their celluloid peers resulted in dialogs and symmetries we hadn't expected," Henner tells Wired. "There's an absurdity to the endless cycle of photographers photographing themselves on-screen but after a while, you start to wonder if it's really that different to what's happening in real life."

To appreciate his perspective watch the full film below; for more on great photographers, consider our wide array of photography books, and for more insight into great moments in cinema, take a look at our film books. And, if you want to go back to the source of all this, our book on Christian Marclay is a fine place to start.