Architects and artists experiment with space

It seems as if the worlds of the artist (interested in process and change) and the architect (concerned with form and stability) are as far removed from one another as Paris is from Pluto. The concepts of interactivity and connectedness may be entrenched within conceptual art, but they’re strangers to modern theoretical architecture and landscape urbanism. An upcoming exhibition at the San Francisco Museum of Modern Art, however, shows that these boundaries are becoming increasingly blurred.

Field Conditions takes its title from an influential essay by US architect and theorist Stan Allen, in which he noted a society-wide move away from an obsession with overarching geometric plans to a focus instead on intricate connections on a local level. In other words – a shift from “object” to “field”. This exhibition presents works in various media by both contemporary artists and practising architects, all using a kind of architectural language to redefine space and relationships occurring within it.

Alongside a drawing by Allen himself  – a boggling collection of algorithmically generated floor plans – is one of architect Daniel Libeskind’s famous Micromegas works, equal parts precision-tooled geometric drawing and furious abstract doodle. His ’70s deconstructionist approach paved the way for Lebbeus Woods, who’s represented by his Conflict Space, a bold geometric drawing (hand-)made to room scale. 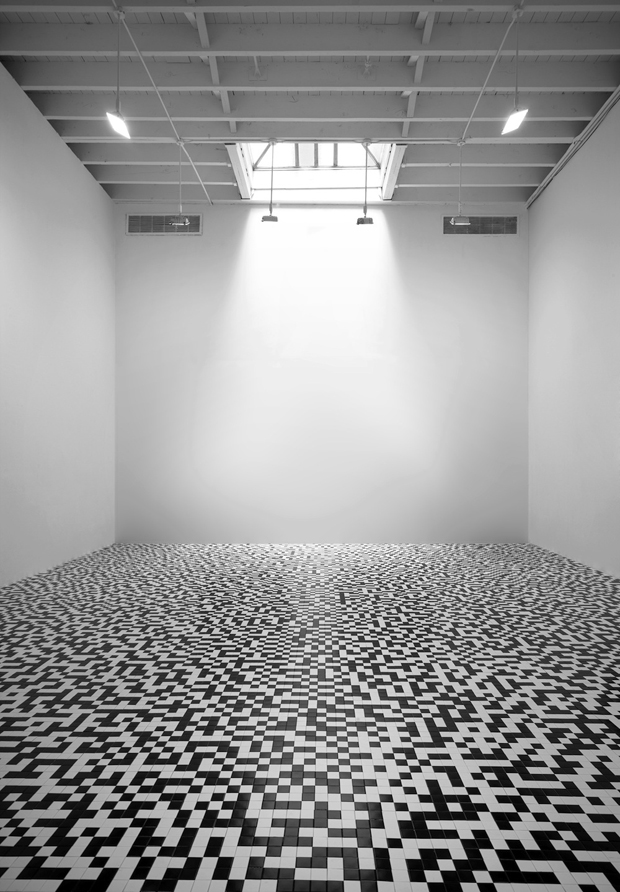 Also on show are late conceptualist Sol LeWitt’s Wall Drawing #45, which messes with the idea of the traditional frame, since its size is determined by the dimensions of the wall, and two pieces by Tauba Auerbach. Her 50/50 Floor (above) is a dazzling chequerboard of random black and white that invites viewers to follow a pathway through the geometric maze, while Static 6 throws up a very different idea of the “field” in the form of a photograph of television “snow”.

Other spatial experimenters are LA video artist Casey Reas who we recently wrote about and Austria’s Peter Jellitsch, whose complex shapes suggest they were computer-generated, when in fact they’re entirely hand-drawn. Field Conditions at SFMOMA: September 1, 2012 – January 6, 2013