Jack Whitten on de Kooning, Civil Rights and his legacy

In his final video interview, the abstract artist described his life, work and how he wanted to be remembered

When Jack Whitten died in January this year, his passing was all the more bitter as many of us had only just begun to appreciate the 76-year-old's singular works.

As we explain it in our new survey of contemporary painting, Vitamin P3, Whitten did away with simple brushes a long time ago, preferring instead to squeegee, stick and otherwise apply materials to his dense, abstract, often monochromatic wall pieces. "Part carpentry shop, part scientific laboratory," explains P3, "Whitten’s studio reveals his fifty-year commitment to rigorous experimentation with materials."

Plenty of this experimentation can be seen in a new video, shot for non-profit Art21's digital documentary series Extended Play.

The footage, the artist's final video interview, was shot towards the end of last year, while Whitten was also making what would become his final painting, Quantum Wall, VIII (For Arshile Gorky, My First Love In Painting), on display currently at Hauser & Wirth in New York. 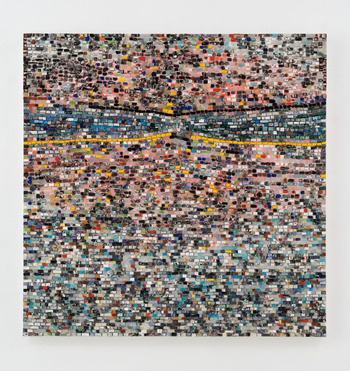 In the footage, which you can watch in full below, Whitten discusses his early life in segregated Alabama - a social measure that the artist describes simply as 'American Apartheid' - as well as his time at Tuskegee University, his part in early Civil Rights demonstrations, his subsequent relocation to New York City and his acceptance at Cooper Union.

He also describes his admiration for a wide range of fellow artists, from Ashlie Gorky to Chuck Berry, his techniques and ideas, and his more recent ill-health.

The artist's later series, the Black Monoliths, memorialised African-Americans, such as Muhammad Ali and James Baldwin, who have contributed something significant to society; however, Whitten, despite his own achievements, wasn't looking for any great, personal memorial himself.

When asked about his legacy, the artist sets out very modest ambitions; quoting the jazz pianist and band leader Count Basie, he says, "I just want to go down as one of the boys." That simple epitaph appears to be more than guaranteed.

For greater detail on Whitten's work and his place within contemprary painting order a copy of Vitamin P3 here.