Did anyone see The Souls of Millions of Light Years Away on TV last week? You may have, if you caught British singer Adele’s closing performance or the 2016 Brit Awards. The star, who also won four awards last Wednesday, including Best Female Solo Artist and Album of the Year, sang her recent single, When We Were Young, in front of a twinkling video backdrop.

The singer has now revealed that this footage was shot last month inside Yayoi Kusama's installation, Infinity Mirrored Room—The Souls of Millions of Light Years Away, currently on display at the Broad contemporary art museum in LA.

Adele apparently first came across this work by the 86-year-old Japanese artist via Katy Perry’s Instagram account. She felt the mirrored space suited her song because, “you can see yourself from every angle,” she says, “When We Were Young was about different points in my life, from childhood up until now.”

Kusama, of course, has been creating mirrored installations since the early 1960s. The points of light are a continuation of her polka-dot paintings, and are, the artist says, a response to the visual hallucinations she has suffered ever since she was a child.

While Adele may not have undergone quite so extreme experience inside the Infinity Room, she says “standing in that room for an hour I saw things in myself that I hadn’t noticed before.” 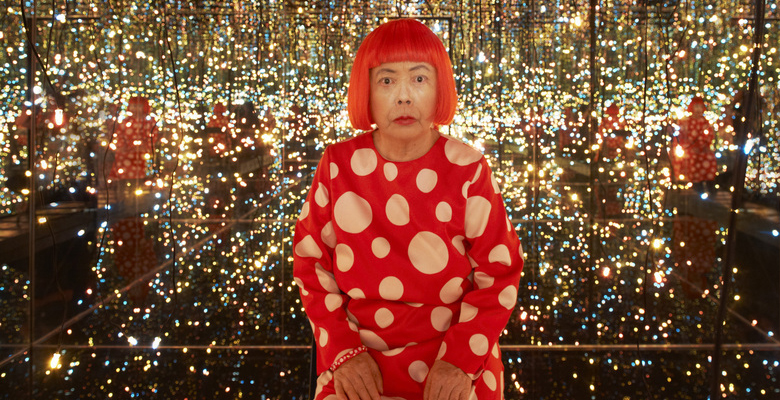 Yayoi Kusama inside one of her Infinity Rooms

You can watch the performance again, above, and to gain a greater understanding of this important artist’s life and work  (we're talking about Kusama!) buy a copy of our Yayoi Kusama monograph.