In April 2012 Pedro Reyes received a call from the Mexican Secretary of Defense's office, asking whether the arist would like some of the remnants of the 6,700 weapons - mainly rifles and hand guns - which had been seized from alleged criminals and were to be destroyed, in a military ceremony in the conflict prone border town of Ciudad Juarez.

The authorities already knew of Reyes' Palas por Pistolas (2008) project, wherein the artist turned 1,527 guns into 1,527 shovels to plant 1,527 trees. While Reyes gratefully accepted this once-lethal consignment of scrap, he was anxious to extend his artist practice, and so he opted to turn the weapons into instruments, employing a group of six musicians over a two-week period, to turn the barrels and magazines into percussion, wind and string instruments. 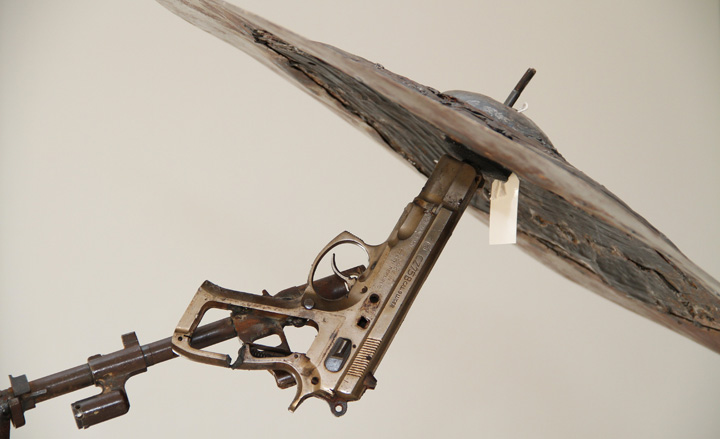 Reyes dubbed the project Imagine, perhaps in reference to the John Lennon song which encourages listeners to dream of a better world.

On his blog, he writes "In the last century there has been organised movements for gay rights, gender and race equality and the environment, yet we still need to express our desire for a world without weapons. Living in a community free of guns ought to be a human right. Many liberties that we enjoy today were once considered utopian, and the first step taken into that direction was to Imagine."

While this aspiration is made all the more painfully urgent in Mexico - where 11,309 homicides by firearms were committed in 2010 - it remains a poignant work for London gallery goers, who will get the chance to see the instruments at the Lisson Gallery next month. 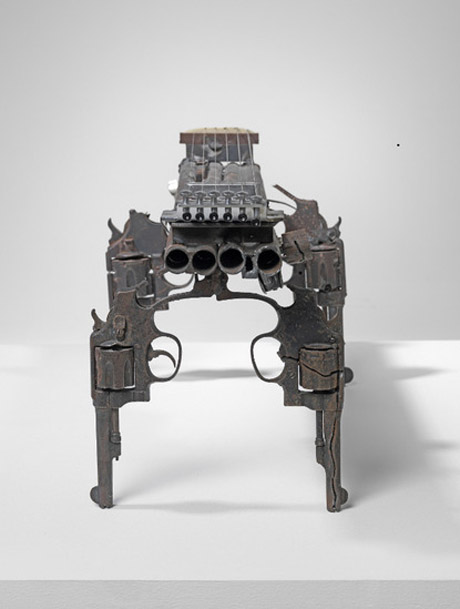 This Reyes show, entitled Disarm, brings together his 2012 instruments alongside a never-before-exhibited installation of mechanical musical instruments, which can either be set running automatically, or played live via a computer and midi-enabled keyboard.

Reyes has also made a series of collages, themed around his wish for a world without guns, and collaborated with British musician and composer John Coxon, to produce a vinyl record for the show.

You can see it all from 26 March - 4 May. For more, see the Lisson Gallery's site, or Reyes own blog.