The New Museum retrospective might not open until Oct 2, but on the building's exterior, the show has begun

When Chris Burden builds a shed, his methods are as unorthodox as his artistic practice. Back in the early nineties, the artist, widely known for having himself shot at for his 1971 piece, Shoot, decided to build a freestanding studio on his LA property. Burden enquired as to what was the largest building he could erect without the issuing of a permit. The conclusion he reached was that a detached structure with less than 400 square feet of floor space and a little under 35 feet tall could be put up without any paperwork.

Over the intervening years, local building laws have changed, and now Burden apparently sneaks his self-described Quasi-Legal Skyscrapers out as a 'temporary amusement structure' - the law that allows a funfair ride to be built and taken down over a weekend.

So, will New York's Department of Buildings receive complaints regarding Burden's little skyscrapers, which have been erected on the roof of Lower Manhattan's New Museum, ahead of its Chris Burden retrospective next month?

We hope not, as we think they serve as a nice meditation on city living, architecture, and the role of the individual in the built environment. The mood is leavened by the addition of Burden's Ghost Ship, which has also been installed on the outside of the museum. 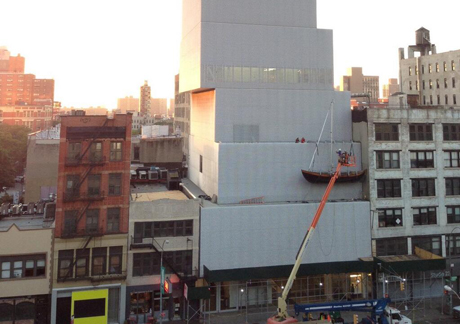 Burden created this crewless, self-navigating boat in 2005; the craft sailed around Fair Isle, off the coast of Scotland, and now hangs from the side of the building at 235 Bowery, looking more like a Pirates of the Caribbean prop rather than a carefully engineered piece of concept art.

Curious art lovers can take a look at the works on the building's exterior now. Those wanting a more thorough introduction to the artist's work, should drop by after 2 October, when the New Museum's Burden retrospective, Extreme Measures, opens to the public. For more on the show, go here. Check out more work by Chris Burden in Defining Contemporary Art and The Artist's Body. For more on how we build today, please take a look at The Phaidon Atlas of 21st Century World Architecture. And, to take advantage of great offers, events and discounts, please sign up to Phaidon Club before you buy anything.