"Honey I shrink wrapped the building!"

Adaptability seems to be the key trend of the moment so you'd expect one of the architecture practices of the moment to be on it. And they are. With the 13,500 square-foot Kukje Gallery building in Seoul, Korea, New York architects Solid Objectives – Idenburg Liu (SO – IL), found a new way to make the white cube effectively disappear and to squeeze more space into less.

Kukje is located in Seoul's Samcheong-ro area, a part of town it helped transform into a gallery district when it opened a space there in 1982. Since then, the scale of contemporary works has grown with the area's art scene. Following shows with Anselm Kiefer and Louise Bourgeois, Kukje expanded its first building over the years, and added a second next door in 2007.

The area's concentration left barely enough room for Kukje to add a third building to its compound, and SO – IL needed to make the most of the plot. “They hoped we could make the biggest box legally possible on the site,” partner Florian Idenburg says of the client. Idenburg and his wife, Jing Liu, the firm's other partner, began by inserting a simple, concrete box—52 feet long by 31 feet wide by 18 feet high—that filled the maximum allowable volume, leaving just enough space around it to not feel cramped. To maintain the purity of a single gallery, the architects pulled out circulation functions so they protrude from the building's exterior: a concrete cylinder for the elevator, a metal stair leading to a roof garden and a swoop of curving glass descending to the basement. “Basically we took the optimal gallery proportions and then added a stair, an elevator. It's a very diagrammatic building,” says Liu.

But they needed something special "to tie all the pieces together,” Liu adds. "So essentially we shrink wrapped [the building].” After stretching a number of materials, including elastic stockings, over models of the gallery during the design process, Idenburg and Liu settled on chain mail and the design team devised a system of 15 panels totalling 500,000, 1.5-inch-diameter hand-welded rings (shipped from China in 15 consignments) that would be stitched together, again by hand, into a seamless, all-encompassing veil. In certain light, the chain mail is almost diaphanous. Artist Paul McCarthy was the first artist to show in the building. Was he happy with the results? “He was very happy,” Idenburg says. “He said it was very suitable!” 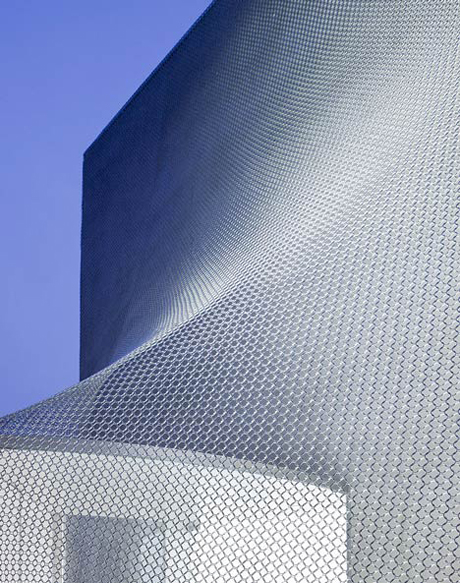