The World Press Photo goes back to Black and White

Does this, the first monochrome image to win the prize for seven years, signal a change in photo reportage?

Just as 20th century fine-art photographers favoured black-and-white film over colour stock, while amateur photographs were happy snapping away on Kodachrome, so 20th century photojournalists also preferred monochrome images over full-colour pictures. Some of this preference came down to the technical limitations of the time; for much of the 20th century, black-and-white was easier to process and develop, while colour shots were harder to reproduce well in newspapers. Yet some bias lay in the aesthetic qualities, with the simple B&W image offering, in some commentators' view, a defter, swifter rendering of the first draft of history.

In recent years, we have begun to reassess the lesser-seen colour images shot by some of the great black-and-white news photographers of the 20th century, including René Burri and Robert Capa. However, is there an equal and opposite movement afoot in contemporary news photography? 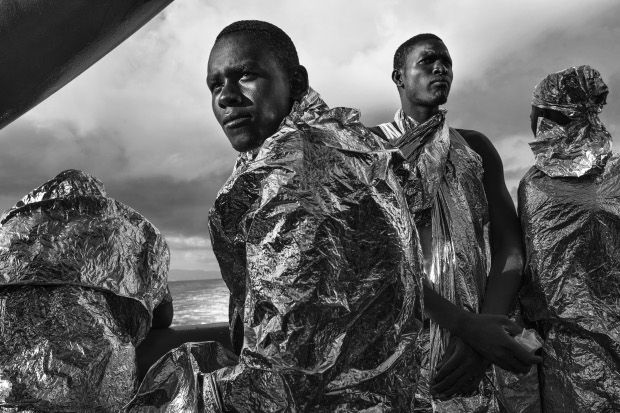 The World Press Photo prize and exhibition first began admitting colour submissions in 1965, and the percentage of full-colour shots to win awards has varied, from five percent in the early 1970s, through to 80 per cent in 2008. Now could the rise of colour have faltered?

The overall winner of the 2016 prize, announced today, is a monochrome image, shot by the Australian-born photographer Warren Richardson, for his 2015 image of a man handing a child under a barbed wire on the Serbian/Hungary during the European migration crisis. 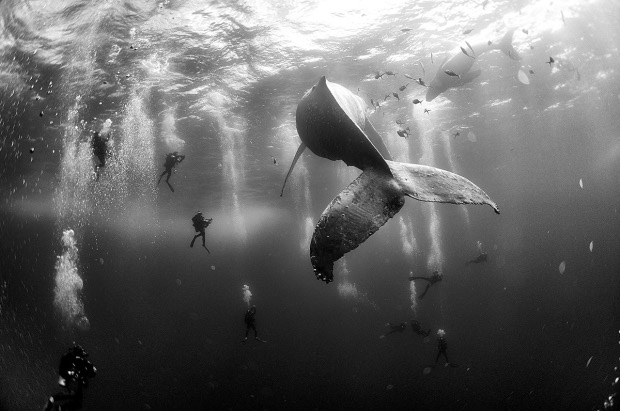 Anuar Patjane Floriuk, Mexico, 2015, Whale Whisperers Divers observe and surround a humpback whale and her newborn calf whilst they swim around Roca Partida in the Revillagigedo Islands, Mexico, 28 January 2015.

“We thought it had almost everything in there to give a strong visual of what’s happening with the refugees,” said Francis Kohn, chair of the general jury, and photo director of Agence France-Presse. “I think it’s a very classical photo, and at the same time it’s timeless. It portrays a situation, but the way it’s done is classic in the greatest sense of the word.”

Warren’s winning picture is the first black-and-white shot to take the award since 2009, and one of many monochromatic images singled out by the jury. 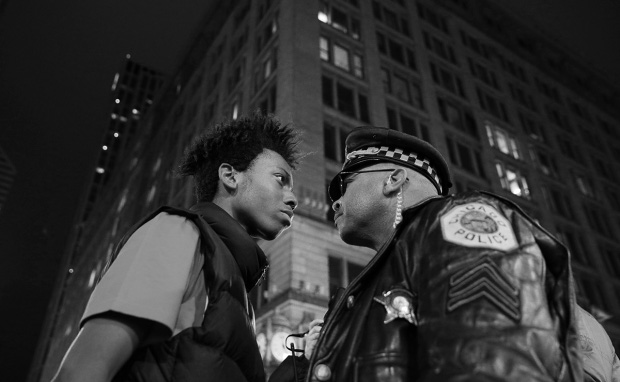 The Mexican photographer Anuar Patjane Floriuk took second place in the nature category for his image of a humpback whale and her newborn calf. Interestingly, this picture was originally shot in colour; Floriuk chose to switch it to black-and-white in order to heighten the images aesthetic qualities.

John J. Kim’s black-and-white shot of a young man staring down a police sergeant during a protest in Chicago also took third place in the award’s contemporary issues category; the Italian photographer Francesco Zizola clinched second place in the same category, for his story about Libyan migrants crossing the Mediterranean, entitled In the Same Boat; while Mary F. Calvert picked up first place in the long-term projects category for her black-and-white story about sexual assault in the US military.

Mary F. Calvert, USA, 2015 Elisha Morrow and Tiffany Berkland were sexually harassed by the same company commander when they were in basic training after joining the Coast Guard. They did not report the harassment for fear of being kicked out but came forward when they met a third victim. When their case went to trial, they met a fourth young woman who had been raped recently by the same company commander. Berkland and Morrow are guilt ridden for not coming forward sooner. They sit in their hotel room after attending the Truth and Justice Summit on MST in Washington, D.C., US, 18 April 2013.

Indeed the prevalence of black-and-white winners has led the prize’ chair to reassure any colour practitioners the apparent bias was not intentional.

“I like black-and-white, it’s great, but I think colour is good too,” Kohn said. “I don’t think photographers should think it represents an added value because it’s in black-and-white.”

For more on the prize go here; for more great reportage photography consider Questions Without Answers by the brilliant VII Photo Agency, which includes winners at the World Press Photo Awards, 2012; as well as the books we have proudly produced with the Magnum Photos.