World War One as pictured in the book Century

To mark the centenary commemorations of the outbreak of World War One today we thought we'd bring you a select crop of some of the images in our book Century. We kick off our piece with the photograph above, taken at the trial of Gavrilo Princip.

The assassination of Archduke Franz Ferdinand, heir to the Austro-Hungarina throne, and his consort Sophie, Duchess von Hohenberg, gave Austria-Hungary the excuse that it had sought for opening hostilities against Serbia, thus precipitating the First World War. Pictured are Gavrilo Princip and accomplices Danilo Ilitch and Nedjelko Cabrinovic, fellow members of the secret Serbian society, the Black Hand, who wanted to destroy Hapsburg rule in the Balkans and unite the southern Slav peoples into a federal nation. At the trial, Princip, the man who shot the fatal bullets in Sarajevo on 28 June 1914, was spared the death penalty because of his age; he was nineteen. 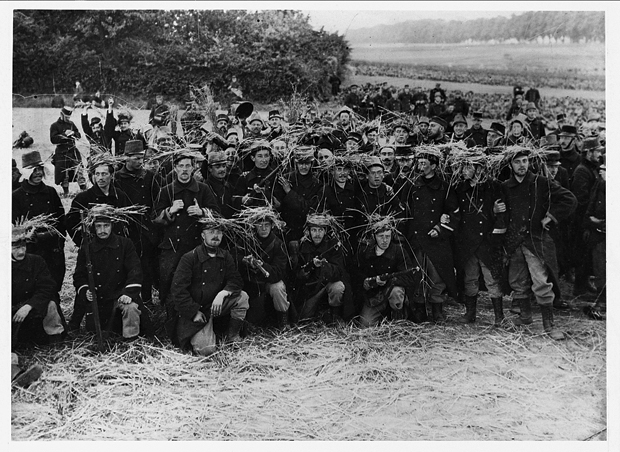 Belgian soldiers seem to have improvised their camouflage for a battle of the farmyards. 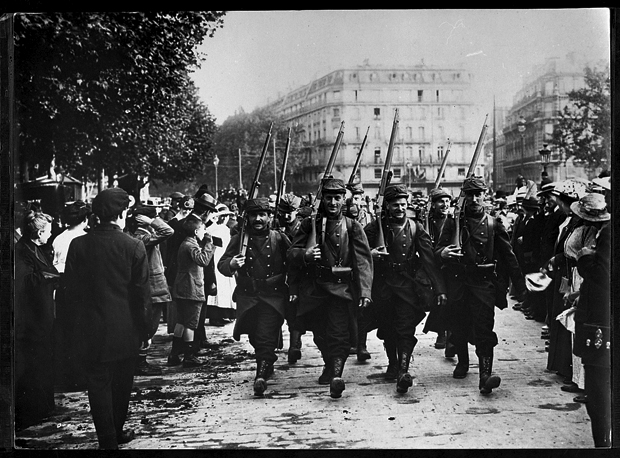 These French troops could be rehearsing their victory parade - but their tragic miscalculation was shared by all. 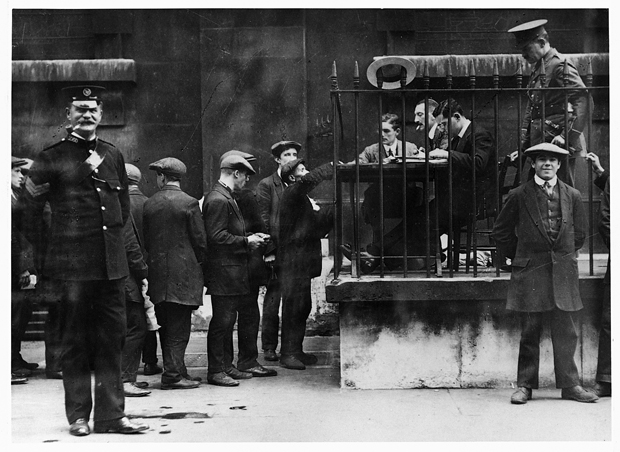 Ingrained hostility to conscription in British society had checked the growth of the nation's army before 1914. Consequently, at the outbreak of war on the continent in August, the number of regular troops of the British army stood at the relatively low figure of 250,000 men. Britain's war mininster, Herbert Kitchener, almost alone at the time among European leaders and military men in predicting a prolonged conflict fought by mass armies immediately began a recruiting drive for new soldiers. By September 1914, 33,000 men were signing up for duty every day. 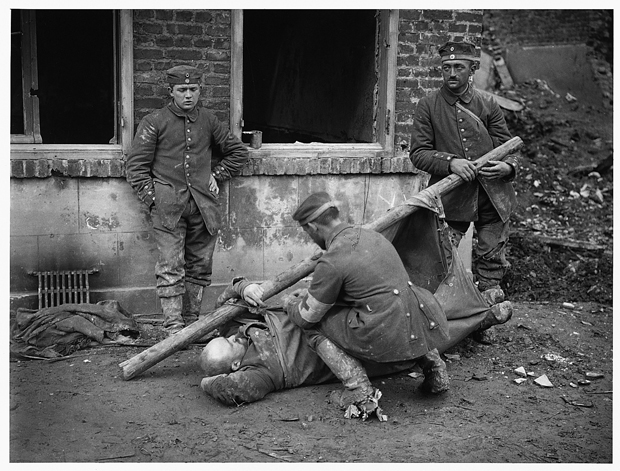 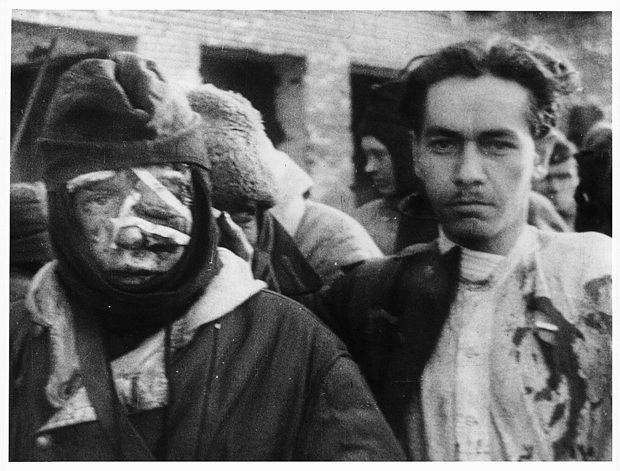 Russian wounded show a stoicism which dated back to before Napoleon's invasion - and which would persist. 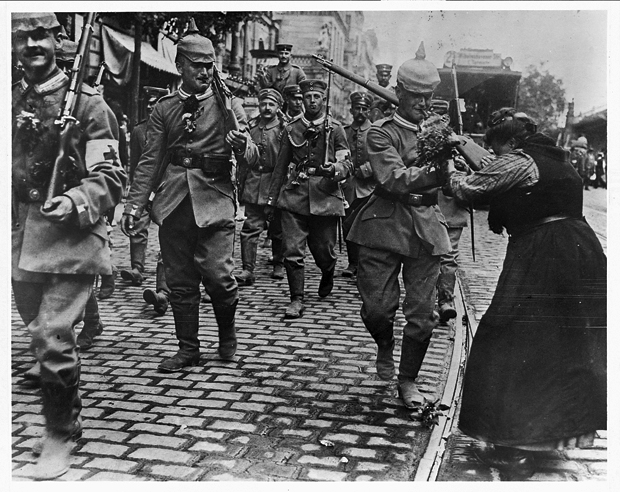 German women present flowers to husbands and sons marching off to war. The imperial German army was more efficiently and better mobilized and better prepared than any land force in the world in 1914 and its equipment was generally superior to that of other European nations. Prior to the war German military planners were convinced that France could be conquered within six weeks, after which the bulk of the German forces could be transferred to the Eastern Front to tackle the slow-mobilizing Russians. But the plan collapsed after French resistance at the Marne and the Germans were forced to continue a very different war from that which they had envisaged. 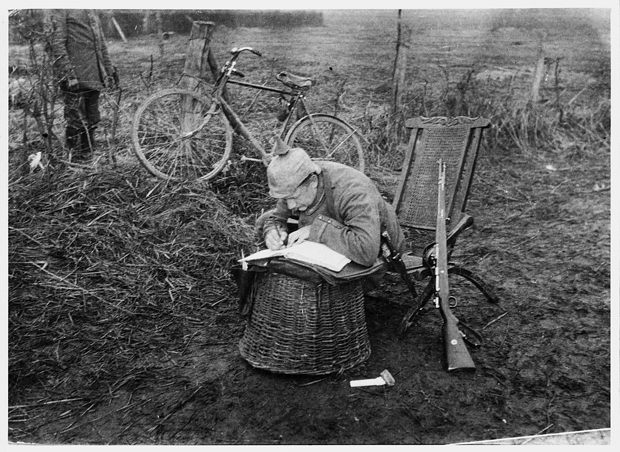 A German solider writing home from Belgium - with doubtless no mention of his army's brutality there. 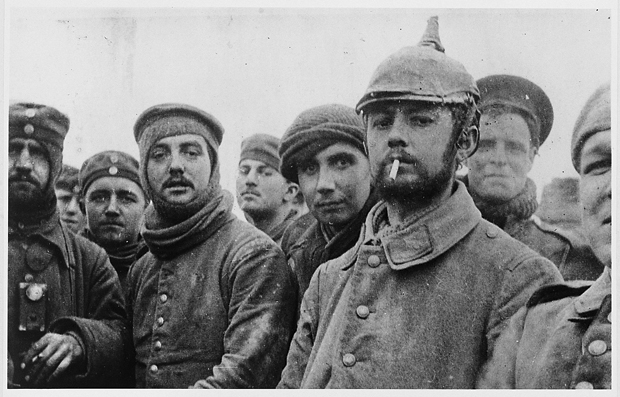 The famous Christmas truce between British and German troops - temporary friends perhaps wary of the camera. 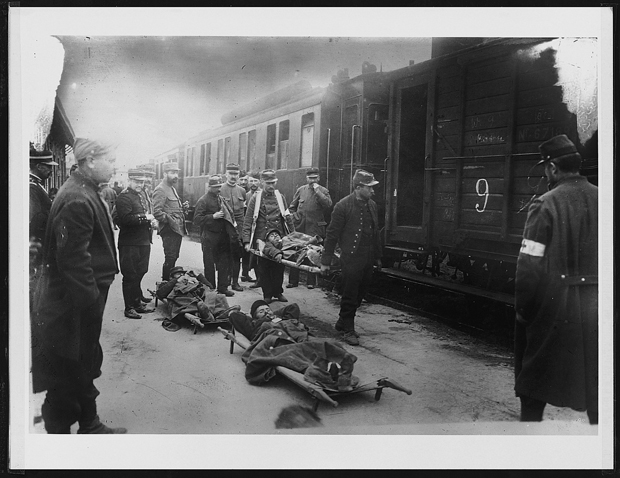 The first trickle of wounded soldiers arriving at Rheims station in north-easter France, gave no indication of the scale of what was to come - the nearby countryside witnessed some of the heaviest fighting of the war. The Germans briefly occupied Rheims itself during their offensive of September 1914, and held the surrounding area after evacuating the city. From here they subjected the city to intermittent bombardment over the next four years. By the end of 1914, the French had sustained losses of about 380,000 killed and 600,000 wounded.

Our book Century covers One hundred years of human progress, regression, suffering and hope. Conceived and edited by photography curator Bruce Bernard it is an extraordinary, award-winning history of the last century in photographs. You can buy it here.