Grace Coddington’s career pretty muchcovers the history of modern fashion. Beginning as a model in the 1950s, and continuing to work right up until the present day, Coddington has seen the business turn from a small, rarefied concern, into a multi-billion dollar, global industry.

When Coddington posted this picture (above, also included in our two-volume collection Saving Grace: My Fashion Archive 1968-2016) to mark the death of the British socialite and fashion photographer Tony Armstrong-Jones, known later as Lord Snowdon, it’s safe to assume Vogue’s creative director at large was speaking from experience.

Indeed, she recalls her time with Snowdon in Grace: 30 Years of Fashion at Vogue, which forms part of our new two-volume set Saving Grace: My Fashion Archive 1968-2016).

“When he was just Tony Armstrong-Jones and I was just an eighteen-year-old who looked like she had stepped out of the pages of Country Life, I was sent to his studio on a “go-see,”” she recalls. “It turned out to be the first of many times that I sat for him – almost always, I now realize, at some of the biggest moments in my life. Upon my second divorce, Snowdon photographed a new me, as a short-haired blonde.”

Despite Snowdon’s social status as a the Queen’s brother-in-law, he remains, in Coddington’s recollections, a remarkably practical photographer.

“In 1985, we did a couture story for British Vogue using Isabelle Pascoe, a young French actress,” Grace writes. “She was absolutely tiny. To get the clothes to fit her properly, we had to conceal an apple box beneath whatever she was wearing. That, plus sculpting her hair into a topiary, almost made her look tall enough to make it on the runway. 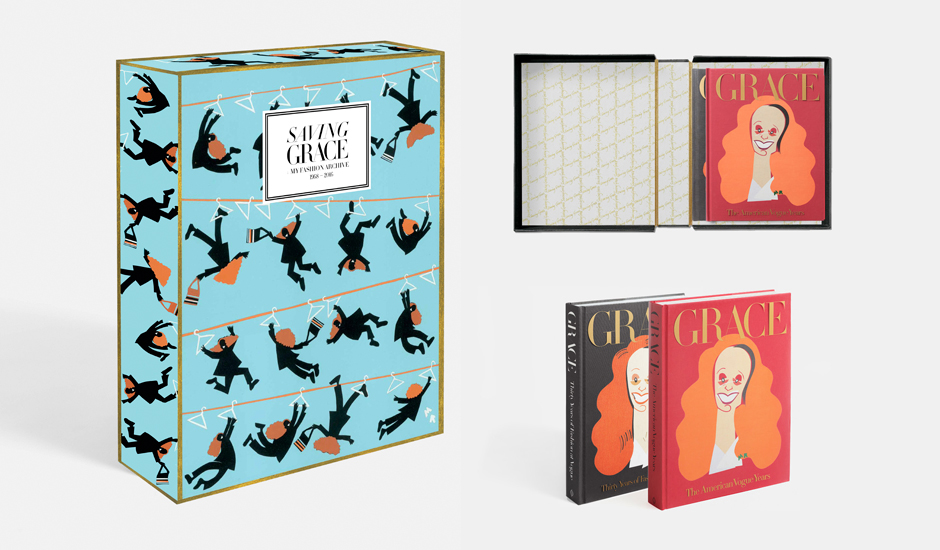 “For the shoot, Snowdon had several pastoral backdrops painted to cover the walls and a thick layer of sand dumped on the floor. Then the animals were brought in – a whippet, a Rottweiler, and a Lipizzaner stallion. You could hardly move, the place was so packed, but Snowdon insisted that the horse’s trainer make his animal rear up, like Lipizzaners are trained to do. Each time the horse stood on its hind legs, I was convinced it was going to land on poor Isabelle, who, of course, had no way to flee, balanced as she was on her box. It was a terrifying night that wouldn’t end. Just when I thought Snowdon had captured the shot, he’d say, “OK, great. Let’s do it one more time!”

To see the shots in question and to learn more about Coddington and Snowdon’s working relationship order a copy of Saving Grace: My Fashion Archive 1968-2016 here.