The best-known paintings by the father of impressionism have not one, but two, things in common

The Art Museum may well be the most ambitious and exhaustive art book ever published. It amounts to a virtual museum, which could fill 25 galleries, and spans the entire history of art, from the spectacular painted animals of the Lascaux cave to the myriad media of our own times. Beautifully laid out and accompanied by concise but informative essays, you could spend an entire afternoon drinking in just four or five of its 450-plus luxurious, edifying pages.

Let's therefore push through imaginary double doors and take in the spread devoted to Edouard Manet, "father" of impressionism. Naturally, it features Le Déjeuner Sur L'Herbe, a work extremely familiar to us now but which caused a scandal when first exhibited in 1863 at the Salon Des Refusés (an exhibition devoted to works rejected by the jury of the official Salon). As with many of Manet's paintings at this time, it referenced previous works - in this instance, Titian's Pastoral Concert and Raphael's Judgment Of Paris. However, 19th century viewers were disconcerted, as well as intrigued not only by the matter-of-fact nudity of the picnicking female but the defiant, deadpan gaze with which she meets the viewer. 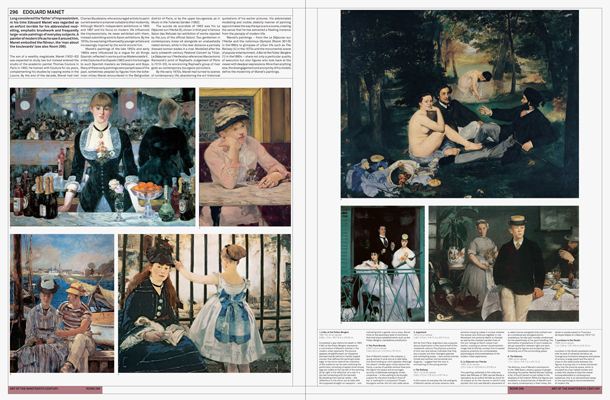 The Edouard Manet 'room' in The Art Museum

This gaze is a recurring feature in the rest of the selections in this spread - the bored, yet intent barmaid who stares at us from A Bar At The Folies-Bergère, the enigmatic female in The Railway, with a young girl who may be her daughter, may be a stranger, or the woman in Argenteuil, who looks out at us almost imploringly as she receives what appear to be the unwelcome attentions of the man sitting next to her. These women speak mutely yet eloquently to us down the decades from the dawn of art's modernity.

If you've enjoyed this look inside our Art Museum, you can see further pages from the title here, and also buy it from the people who made it.