We're all familiar with Guy Bourdin's 1970s hyper saturated images of fashion models (in fact, there's one just up there on the right) draped over shiny surfaces, legs and posteriors exposed for a posterity that's far outlived the perishable pages of fashion mags and ad campaigns.

The images are characterized by theatrical lighting, dramatically graphic composition and vivid colour. But how did this almost obsessive formalist get to that point? Swiping through the images from the early 1950s and 60s in the new iBook version of our Guy Bourdin 55 book this morning gave us a real insight into the work of a burgeoning photographer, trying out numerous approaches and styles, on the cusp of inventing his own language.

As you possibly know, it was surrealism that provided the primary conceptual influence during these formative years. After continuously knocking on but being turned away from the door of his idol, Man Ray, Bourdin, who received his photographic training as a cadet in the air force, was eventually permitted to enter the artist's studio, and some time later, his confidence. As a veteran of several avant-garde movements, including Dada and Surrealism, Man Ray provided a perfect example for the development of Bourdin's own unorthodox conception of art making. Take a look at the shots below then download the iBook here. 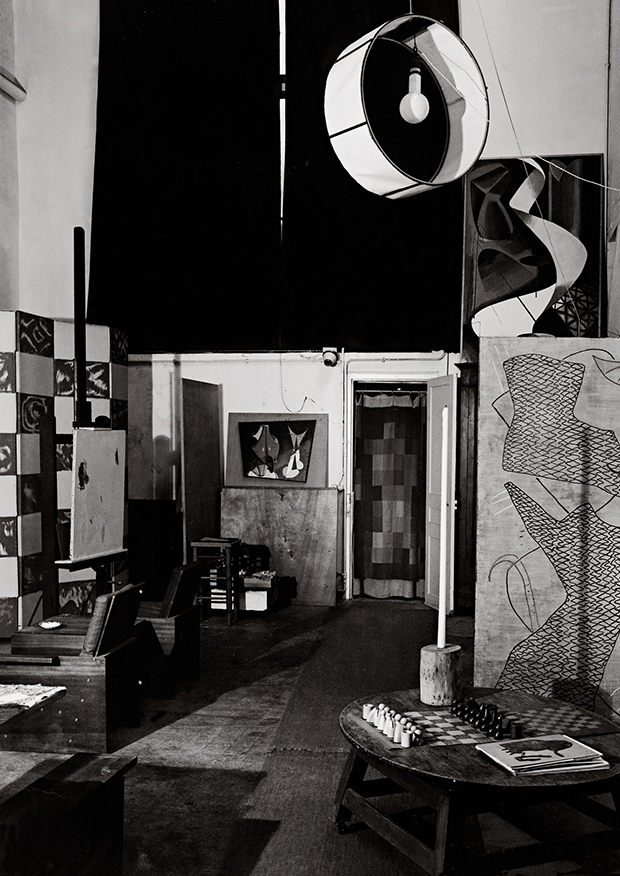 Interior of Man Ray's studio, Paris, France (unpublished) 1953-7  Man Ray above all provided a model of total artistic freedom - evidenced by this photograph of his atelier taken during their brief yet influential friendship. The shot shows utilitarian objects such as his spiral semicircle Lampshade (1921), his famous Chess Set (1942) and his folding screen entitled Les Vingt jours et nuits de Juliet (1952) comfortably co-habiting with more high art paintings and sculptures.

Chapeaux-Choc (Hat Shocker)  main photograph above This was the title of Bourdin's first pictorial, and as the title suggests, nothing less than a 'mini-scandale' ensued. Bourdin posed his models in the grimy meat market of Paris's Les Halles. The latest creations of milliner Claude Saint-Cyr were juxtaposed with dead cows' heads, eviscerated rabbits and freshly slaughtered slabs of meat hanging from menacing looking metal hooks. The elegantly appointed women smile back at Bourdin's lens with the usual complacency, amplfying the abnormality of the backdrop. This was far from the standard Vogue fare. But despite the angry letters and cancelled subscriptions the shoot inaugurated Bourdin's three decade long relationship with Vogue. 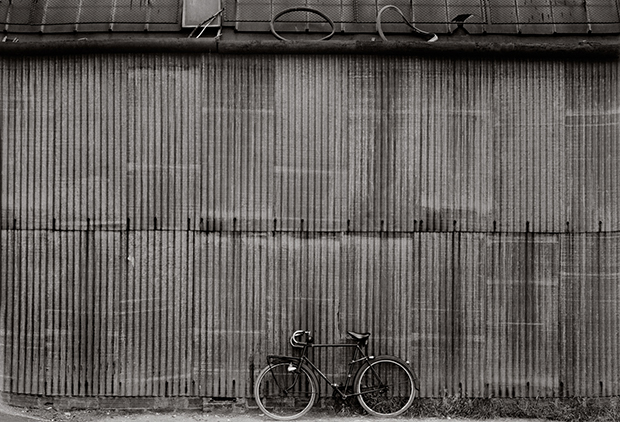 Unpublished 1953-7 The discarded bicycle wheels in the gutter above in the picture below a phantom echo of the bike below. The pregnant, nearly empty landscape became a recurrent trope in Bourdin's later pictures. By then he was renowned for being an enigmatic, somewhat solitary figure whose own photo never appeared on a contributors page - "Guy wanted to remove every trace of his life," said one Vogue collaborator. 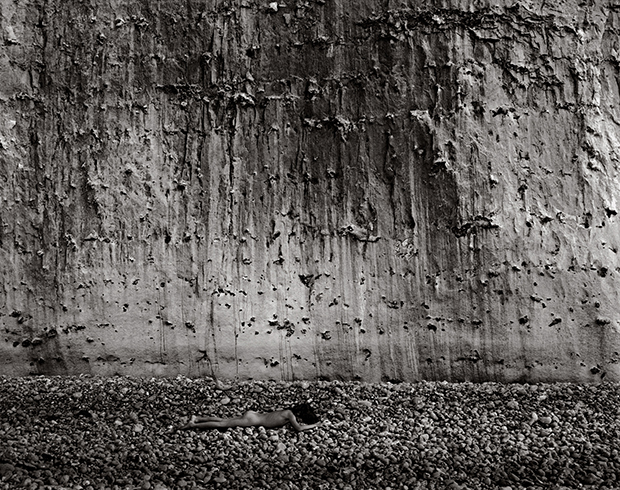 Unpublished 1953-7 Bourdin focused his lens on an austere beach landscape - probably in Normandy where his family had a house by the sea. The naked body of a young girl is pictured lying on a bed of rocks against a backdrop of the dramatically vertical cliff. Under the obvious inflence of the American photographer Edward Weston, this crisp image divulges Bourdin's attentive interest in contrast, symmetry, texture and geometry while still communicating a haunting, suspenseful mood. 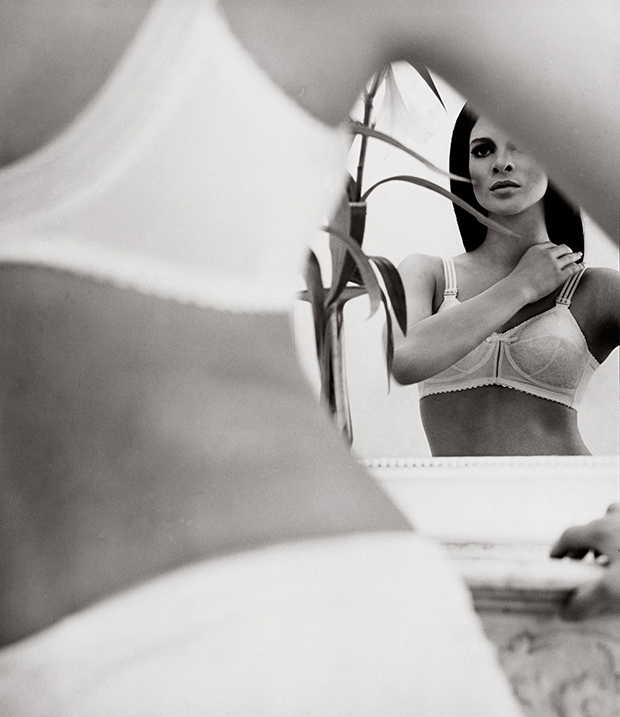 Vogue, Paris, 1964 Over the course of the 1960s, Bourdin gradually shied away from the overt shock tactics present in his first Vogue editorials and increasingly began to imbue his photographs with narrative. Glimpses of this began in 1964 in the June issue of Vogue Bourdin photographed a model in a brassiere in front of a mirror. The model's body itself is out of focus and acts as a frame thorugh which we view her clear reflection in the mirror. Explicitly cinematic, this image, which uncannily anticipates, by more than a decade, the pulp imagery of Cindy Sherman's Untitled Film Stills  series of 1977-80 - broke with established conventions of the model (and the product) directly facing the camera. 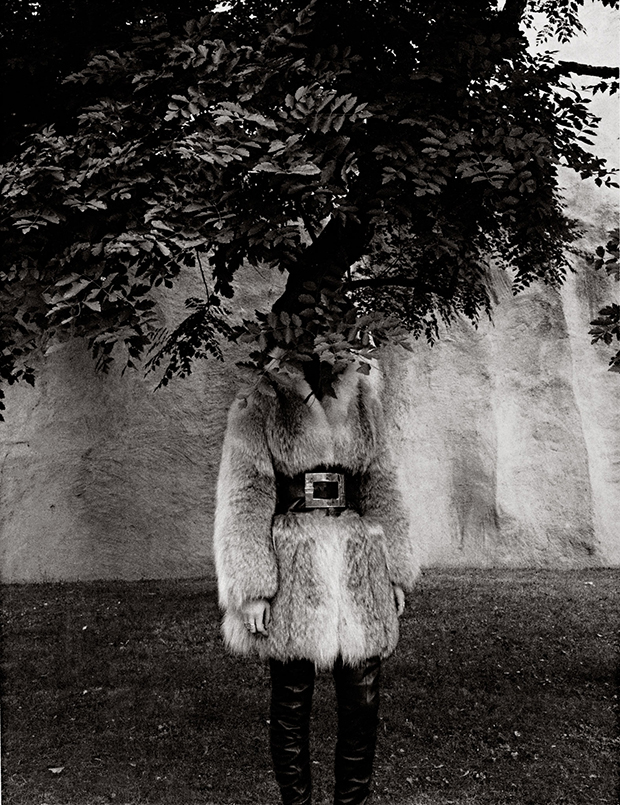 Unpublished image for Vogue, Paris 1969 Bourdin consistently invented different means to disrupt the vapid showcasing of clothing, make up and accessories. Even in this early period of his career, Bourdin understood that the cultivation of desire in fashion photography did not come from the simple description of the featured product. The reader's yearning could be piqued much more effectively by submerging a given product into a seductive mise en scene or an unsettling ambience. Bourdin instantly became a pioneer of subliminal advertising. Like what you've seen? Then download the iBook here.