Before the highly acclaimed American Artist Mike Kelley died in January of this year he was working on creating a full-scale replica of his childhood home with the Museum of Contemporary Art Detroit, Artangel and the Swiss Luma Foundation. The project was suspended after Kelley’s apparent suicide at the age of 57, but has now been completed in collaboration with the trustees of the Mike Kelley Estate and is expected to open in 2013. James Lingwood, a co-director of Artangel who had planned the home with the artist, said that Kelley had approved almost all aspects of the project and signed contracts for its construction before he died. “Fortunately, enough was shared that none of us are feeling that we have to invent very much here,” he said.

Mobile Homestead will be a full-size replica of the artist's childhood home, relocated 16 miles from the Wetstland suburbs where Kelley grew up to the urban centre of Detroit and will serve as a multipurpose facility for community activities. Before his death Kelley said cryptically that the basement of the structure should be used for "private rites of an aesthetic nature.” Three videos Kelley made documenting the project are currently being shown as part of the Whitney Biennial in New York. The Museum of Contemporary Art Detroit has said that the work was a commentary on the “white-flight” movement from cities to suburbs. 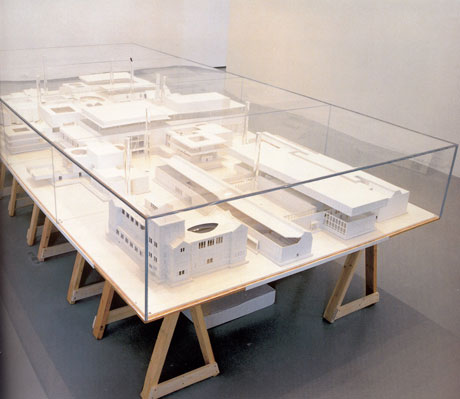 This project isn’t the first time Kelley had revisited the architecture of his childhood – his 1995 piece Educational Complex is a large architectural model of all the schools he ever attended, with the parts he couldn’t remember left empty in order to highlight his formalist art education as a possible source of trauma. “ I thought I should address my ‘abuse’ through the art-education system instead of the more common examples, such as home, because it made it more obvious that this was an aesthetic exercise,” Kelley told Isabelle Graw in Phaidon’s monograph on the artist.