Ibiza, best known for its Superclubs and stunning scenery, might seem like an odd spot to find the tough, uncompromising text art of Jenny Holzer. Yet the 65-year-old US artist, who found fame in the late 1970s with her series of aphoristic Truisms - written onto everything from hand bills to t-shirts to stone benches - is a big fan of this Mediterranean island.

Holzer visited Ibiza in the late 1990s, while installing a show at the Guggenheim Bilbao. Though she wasn’t into the island’s club scene, she tells the NY Times “I saw smiley nude and half-naked old people, babies and hotties. There was much to love.”

Now the artist has returned to delight the island’s nudists and art-lovers alike with a pair of gallery exhibitions as well as a series of outdoor texts, etched onto Ibiza’s caves, cliffs and boulders. 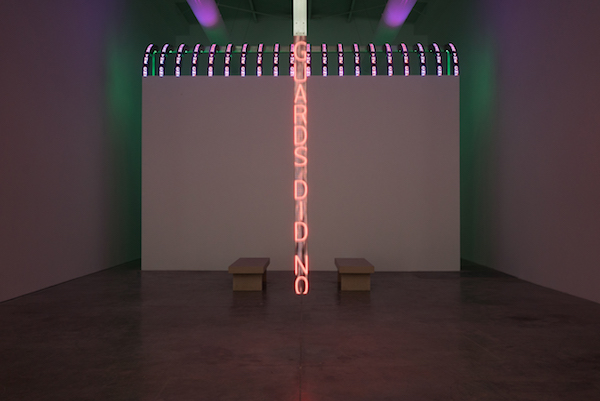 Entitled, ARE YOU ALIVE?, the gallery show opened a couple of days ago at Cirque du Soleil founder Guy Laliberté galleries, Lune Rouge and Art Projects Ibiza galleries, both in the island’s capital, Ibiza Town. The works here feature Holzers Truisms, which the artist is screening on LED read-outs and carved into seats.

However, a little further outside town, on the south-western coast of the island, the artist has installed a more forgiving, numinous series of quotes, drawn from the works of the US Imagist poet Hilda Doolittle, the French writer Arthur Rimbaud, the Mexican poet and diplomat Octavio Paz, and the English novelist DH Lawrence, among others.

Holzer says all the writers “perfected absurdity”, and so suited this wacky stretch of coastline, distinguished by the mystical limestone outcrop Es Vedrà. Let’s hope the island’s nudists appreciate their new-found reading material!

For greater insight into works such as these consider a copy of Land and Environmental Art; and if you like Holzer’s works, take a look at the pieces available over on ArtSpace.